A classic British comedy is being made available to stream online, with Victoria Wood’s Dinnerladies arriving on BBC iPlayer.

The 90s sitcom is ready to watch now, while the shows Keeping up Appearances and This Life will be on the service later this month.

Dinnerladies was created by late comedian Victoria, and focuses on the characters working in the canteen of Manchester-based factory HWD Components.

All five series of Keeping up Appearances, starring Patricia Routledge and Clive Swift as social-climber Hyacinth Bucket and her long-suffering husband Richard, will be on iPlayer on Tuesday, November 16.

Dan McGolpin, director, BBC iPlayer and channels, said: ‘BBC iPlayer has more choice than ever and alongside many of this year’s biggest hits we’re adding these star-studded nineties classics. 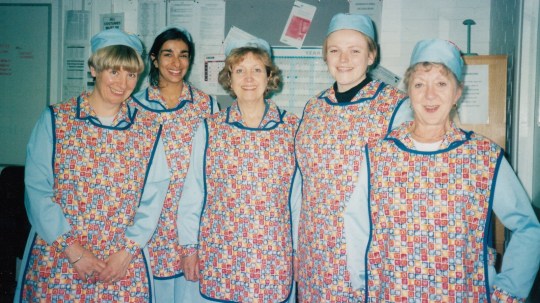 The series is now available on the streaming platform (Picture: BBC)

‘We’ve got something for everyone, whether you want to binge on a much-loved programme or discover something new.’

It comes after other classic 90s box sets were made available on iPlayer, including The Fresh Prince of Bel-Air, One Foot in the Grave, The Thin Blue Line, Absolutely Fabulous and The Vicar of Dibley.

Dinnerladies creator Victoria – who was the recipient of six British Comedy Awards – died in April 2016 after being diagnosed with terminal cancer the previous year, but only a couple of friends and family knew about her illness.

As well as Dinnerladies, she was known for her work on Victoria Wood: As Seen on TV and Housewife, 49.

It was previously revealed that Victoria kept her cancer battle a secret for four years, according to a new biography.

Dinnerladies is available to stream on BBC iPlayer.