Cops have been applauded for taking on ‘disturbing’ work after Channel 4 aired the first episode of its new documentary series Undercover Police: Hunting Paedophiles tonight.

Tonight’s chapter saw a detective as he assumed the identity of a 47-year-old paedophile named Simon, claiming he enjoys sexually abusing his 10-year-old daughter. He also pretended to be looking for other men who would like to join him.

By using the Simon profile, the officer was able to hunt down predator Graham Marshall, who later pleaded guilty to several charges, including inciting sexual activity with a child. He was sentenced to four-and-a-half-years in prison.

Kieran Swain also pleaded guilty to making, possessing and distributing indecent images of children. He received a two-year community order and was added to the sex offenders register for five years.

As a result of the work done, the Simon profile led to a further 10 subjects being investigated. 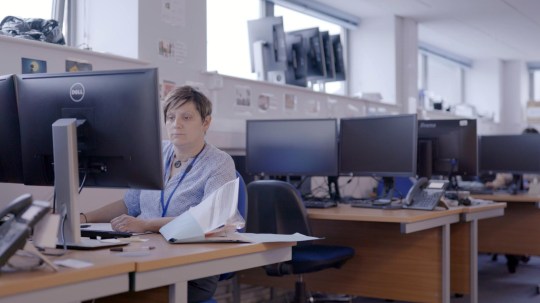 Five were arrested, three were prosecuted and three were sent to prison.

‘For me, it’s the best job in the world,’ the officer who went undercover, said.

Viewers heaped praise on the police force for working hard to catch ‘sick’ predators on the internet.

#undercoverpolice that was a difficult watch. Its really disturbing that the courts don’t follow up with appropriate sentences.

#undercoverpolice @LancsPolice and Kent police, to all the Simons, you are just incredible at what you do & hope you all have the support you need. The law needs to drastically change because itâs sickening seeing the sentences these very, very evil & twisted people receive.

One of the hardest watches in my life #undercoverpolice wanted to turn it off! Tbh but I think it would be arrogant of me to not be aware of whatâs going on! This team need praising! Like wow ð god bless them & especially the children in my prayers…

That was the most difficult, sickening documentary I have ever watched. I donât think I can watch the next part – totally shocking. Our police are incredible for the work they do to catch these horrendous people #undercoverpolice

Absolute unwavering respect to the police officers and support staff who work tirelessly protecting children from harm. The emotional toll must be extremely high. Exceptional strength of character needed to undertake this work. Truly. #undercoverpolice

‘That was the most difficult, sickening documentary I have ever watched,’ wrote one. I don’t think I can watch the next part – totally shocking. Our police are incredible for the work they do to catch these horrendous people.’

Echoing a similar sentiment, another penned: ‘Absolute unwavering respect to the police officers and support staff who work tirelessly protecting children from harm. The emotional toll must be extremely high. Exceptional strength of character needed to undertake this work. Truly.’

Following a raft of high-profile vigilante ‘paedophile hunter’ stings, the police rolled out a new strategy in 2017 across England and Wales to catch paedophiles online using undercover police officers.

The police teams featured have led the way in developing this tactic, which has seen hundreds of child sex offenders not previously known to police, identified and arrested.

The explosion in online child sexual abuse has only worsened during the pandemic with reports of obscene material more than doubling globally to more than 4million in the first month of lockdown in 2020.

In the UK, 300,000 people are considered a threat to children either through physical ‘contact’ abuse or online.

Undercover Police: Hunting Paedophiles is available to stream on All4.

Toddlers are more likely to catch Covid at HOME than nursery, study finds