Scenes from a Marriage

Committed, intense performances from Jessica Chastain and Oscar Isaac animate this five-part reimagining of Ingmar Bergman’s 1973 series and invest it with considerable power. There’s an interesting flip of the gender power-balance in the couple’s gradually disintegrating marriage in Hagai Levi’s new version. Chastain’s Mira is now the primary breadwinner of the family while Jonathan (Isaac) looks after their daughter. The series takes a while to gather momentum – it’s perhaps too long before the characters feel fully developed. However, it does cleverly play with the assumptions of Bergman’s original in relation to modern ideas about marriage and monogamy. Phil Harrison

A fascinating and brave first-person account of gambling addiction from former footballer Paul Merson. As he recalls trigger points in his past and speaks to people who have known him for years, what really hits home is how raw and present the issue remains. Merson may be in remission but he knows that’s potentially a temporary state. PH

As we rejoin New Labour, they’re assuming power. Gordon Brown’s plan for the Bank of England is explored, as is one of the administration’s most unequivocal triumphs: peace in Northern Ireland. An immaculately sourced series that communicates both the early idealism and the gradual withering of the Blairite project. PH

Lock-Lock? Who’s there? It’s Ollie and Gareth and they’re waiting to find out if their surrogate is pregnant and there’s a baby on the way. More pressing business from the uber-privileged corner of west London as this durable constructed reality show returns for a 22nd series. PH

Nature and Us: A History Through Art

The words “cultivation” and “culture” come from the same root so it makes sense that our evolving relationship with the natural world has shaped how we create art. This epoch-spanning three-parter hosted by art historian James Fox digs deep into that premise, beginning 12,000 years ago with carvings and cave paintings. Graeme Virtue

Can women trust the police to protect them? Recent events have raised this horrifying question and now Ellie Flynn is investigating the true scale of sexual misconduct by serving police officers. Research uncovers allegations spanning the country, plus the failure of some forces to investigate their own. Ellen E Jones 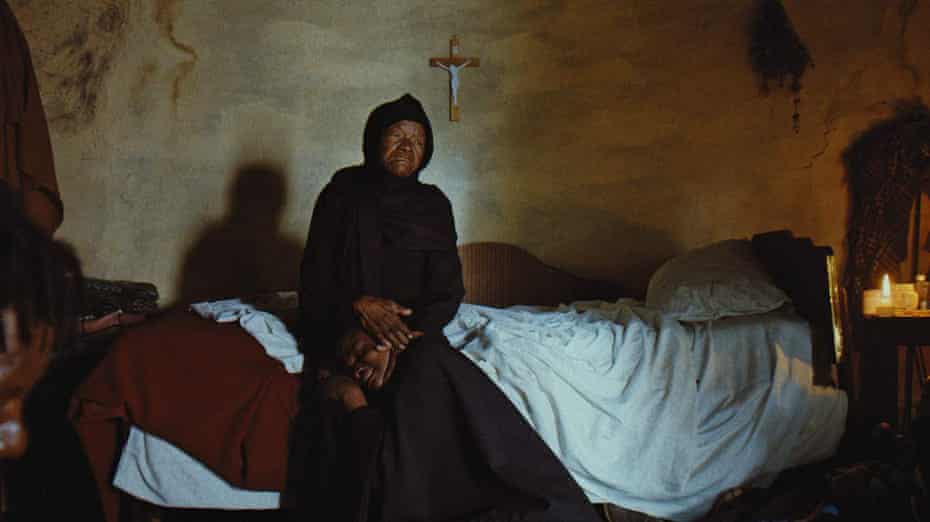 This Is Not a Burial, It’s a Resurrection.

This Is Not a Burial, It’s a Resurrection (Lemohang Jeremiah Mosese, 2019) Monday, 1.55am, Channel 4
Lesotho is not an obvious country to find standout film-making, but Lemohang Jeremiah Mosese’s 2019 drama is a real treat. Mary Twala is a mesmeric presence as Mantoa, a widow grieving her dead son whose personal mourning becomes conflated with the imminent demise of her village, due to be submerged by a reservoir in a dam project. It’s an unhurried tale with mythical overtones, narrated by a grizzled old musician in a bar, in which pastoral beauty and the rhythms of rural life are disrupted by tragedy, with Yu Miyashita’s score adding to the disquiet. Simon Wardell