This Morning’s travel expert Simon Calder has stepped in to defend his advice encouraging viewers to book their summer holidays despite the government’s advice suggesting not too.

Appearing via video link on Tuesday’s instalment, Simon spoke about the SOS Save Our Summer campaign, which has seen over 120 UK travel companies pushing for overseas holidays to be allowed by the government from May 1.

The expert’s admission came after hosts Eamonn Holmes and Ruth Langsford discussed whether people should book a 2021 summer holiday or not.

Simon began by explaining that despite the fact the government has banned any non-essential travel, the businesses behind the SOS campaign are demanding that it lifts some of the travel restrictions.

‘We are demanding all of the restrictions, or at least some of them are relaxed by the start of May,’ he told them. ‘Which is when the main summer holiday charter season starts.

‘The government has made it absolutely clear that all holidays are off for the indefinite future, it’s illegal to go on holiday.’ 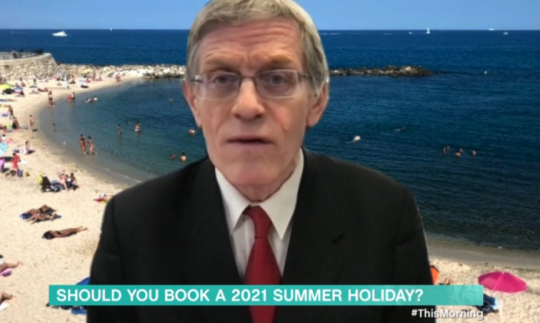 He continued: ‘Like we saw yesterday, the tightest restrictions in history came in. People going off to hotel quarantine, paying £1,750 to go and sit in an airport hotel.

Following the segment, unhappy viewers took to Twitter to air their thoughts, with many branding the travel expert as ‘irresponsible’ for encouraging people to book a holiday during a pandemic.

One viewer raged: ‘Simon Calder isn’t looking out for the consumer. He’s proved this throughout the pandemic. He’s so irresponsible in encouraging people to book foreign holidays. In a raging pandemic.’

While another commented: ‘This is very irresponsible talking about holiday bookings in March. The travel companies will just change the rules for refunds. Once again he’s spouting nonsense.’

Other viewers stepped in to defend the travel expert, as one tweeted: ‘I think people are missing the point…. booking a holiday and actually going on the holiday are 2 different things. He’s just saying if it’s safe/legal by then and it happens then great but if not know your rights.’ 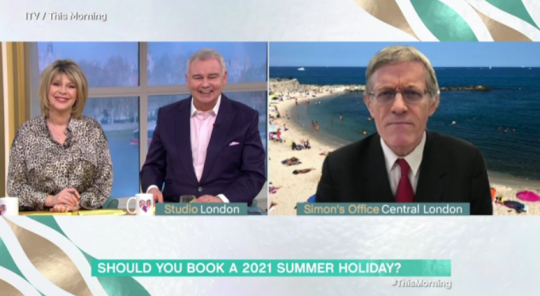 Will you be booking a summer holiday? (Picture: ITV)

Despite the backlash, Simon told Metro.co.uk that he stands by what he said on the programme.

He explained that even though travelling abroad is currently illegal, it doesn’t ‘make it wrong for companies to offer holidays or for people to book them’.

He told us: ‘As we endure a third lockdown, many of us want something to look forward to – and anticipation is a really valuable element of any holiday.

‘So I was happy to point out that it is perfectly rational to book a holiday so long as you are aware it may not go ahead, and you are confident in getting your money back if this appalling pandemic takes another turn for the worse.’

The 65-year-old went on to reassure people who may be worried about getting a refund if their holiday gets cancelled.

He explained that UK operators including Butlins and Center Parcs have ‘customer-friendly refund policies’ while anyone booking a foreign holiday can book a package deal – meaning they are ‘safe in the knowledge that they will either get the holiday they dream of or a full refund.’

‘When leisure travel is once again permitted, it is, of course, a personal decision whether or not to go on holiday,’ he added.

‘My aim was to show that it is quite possible to book an escape in the hope that it can go ahead while emphasising that nothing can be guaranteed.’

Simon’s comments come after it was reported that Ryanair’s advert, encouraging people to book their summer holidays, was banned following outrage from viewers.

The Advertising Standards Authority (ASA) said it had received 2,370 complaints about the advert – which was shown from December to January.