Tracy Beaker star Dani Harmer says the cast were ‘fuming’ when her foster mum Cam married a man in the original series.

The heart-warming finale of My Mum Tracy Beaker – which caught up with Tracy 20 years on from the Dumping Ground – saw Tracy become best woman to Cam (Lisa Coleman) as she wed Mary Oliver (Danielle Henry).

Her sexuality was never mentioned outright in the 2002 series however author Jacqueline Wilson has said in the past that she intended Cam to be gay.

This was confirmed in the third episode, called I Just Want My Mum Back with Tracy attending the big day with her daughter Jess (Emma Maggie Davies) and giving a speech.

After the episode Dani tweeted that Cam ‘deserves a Queen’.

She wrote: ‘At last Cam finally got her happy ending!!! We were fuming when she got married off to a man in the original series! It was ridiculous!

At last Cam finally got her happy ending!!! We were fuming when she got married off to a man in the original series! It was ridiculous! But so glad Cam got what she deserved! She is a Queen and deserved a Queen in return ð¥³ð¥°xxx

‘But so glad Cam got what she deserved! She is a Queen and deserved a Queen in return.’ 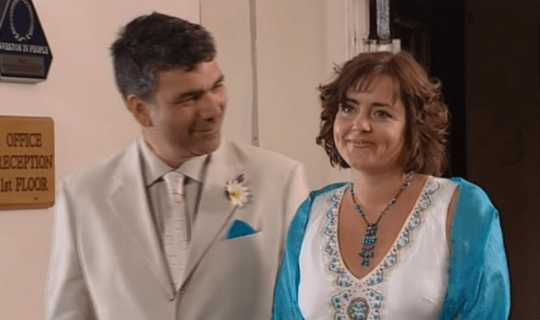 In her best woman speech at the wedding Tracy said: ‘I used to nag Cam all the time about her books, “Why were they so miserable? Where were the happy endings?” And she’d always say that she didn’t believe in fairy tales.

‘I’m so glad that she finally changed her mind, and I couldn’t be prouder to be her best woman. To the best mum in the world, and her amazing wife Mary. To Cam and Mary.’

The episode also hinted there was more to come from Tracy and Jess as the pair built sandcastles on a beach before racing each other to the sea.

‘The story of the Beaker girls was just getting started,’ Jess said before a message appeared which read ‘To be continued…’.

My Mum Tracy Beaker is available on BBC iPlayer.