Viewers were left in tears on Sunday night as Tom Parker opened up about his journey living with cancer during the moving Channel 4 documentary Inside My Head.

The film focuses on the Wanted singer amid his brain cancer diagnosis and proved to be emotional viewing for many fans.

The 33-year-old performer was diagnosed with glioblastoma, an inoperable brain tumour, last year. The film saw him break down in tears as he considered his future.

Tom recently learned that the tumour has shrunk, but the singer said he is unsure about what comes next during Sunday’s film.

‘I don’t want people to treat me different just because I’ve got something, I think that was always on my mind.’

He continued: ‘I do feel like I’m in a much stronger place, but it’s so hard to think about the future. Do you know what I mean?’ 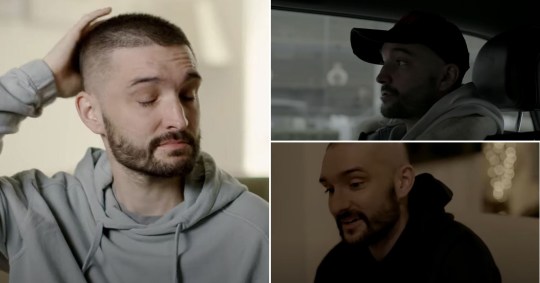 Tom then bowed his head and started to cry, adding: ‘I genuinely don’t know what it holds anymore.’

Viewers flooded to social media to share their messages of support for the ‘inspirational’ singer.

‘We love you! You are a massive inspiration to us,’ one wrote.

Another viewer wrote: ‘Spent the first 20 minutes of the Tom Parker documentary in tears. What a brave man to film this whilst living with an inoperable brain tumour.’

‘I have no words to describe the admiration and respect I have for him,’ another said.

Dancing on Ice’s James Jordan wrote: ‘What a wonderful man and family with such a positive outlook on life in the darkest of times.’

Anyone else watching Tom Parker Inside my Head ?

Thank you Tom for #insidemyhead itâs been so eye opening to not take life for granted. You are unbelievably strong and Kelseyâs support and spirit is amazing. Keep being strong â¤ï¸ @TomParker

The film also saw Tom’s wife Kelsey explain that the last three months have been ‘horrendous’ for the family.

‘Life has just been so hard watching my husband go through this,’ she admitted.

‘You just want to be there for him and do it for him. I feel like he’s slowly becoming himself again, but it’s just going to take a bit of time for him to digest everything that’s happened to him.’

The couple have been married since 2018 and are parents to one-year-old Bodhi and two-year-old Aurelia Rose.

Tom Parker: Inside My Head is available to stream on catch-up on All4.