THIS Morning fans were left in hysterics today as Alison Hammond’s new interview with US superstar Justin Timberlake aired.

The 45-year-old presenter threw the singer a surprise Zoom birthday party in honour of his upcoming 40th – complete with party rings and a kazoo. 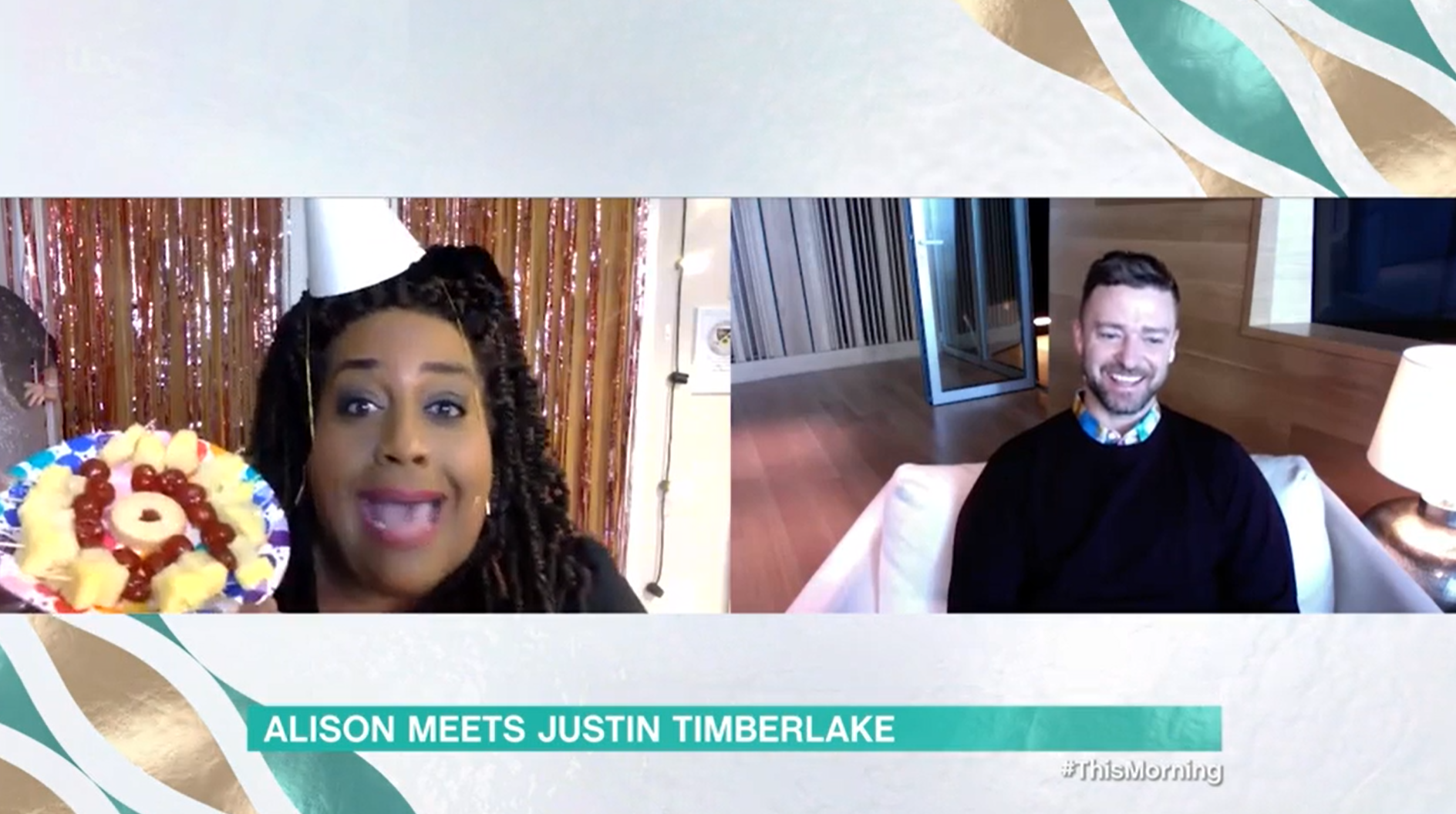 Justin was visibly amused by Alison’s unorthodox interview technique, and played along like a trooper when she offered to send him a cardboard cut-out of herself.

She told Justin: “I’ve got a present for you, the only thing is I couldn’t afford to post it to you but I’m going to show you – it is just a cut out of me!”

The good-natured star replied: “Wonderful, I can’t wait to have that in my arms.”

Alison cheekily asked: “Will you pay for postage?” to which Justin insisted: “Yeah, no worries, I’ve got it.” 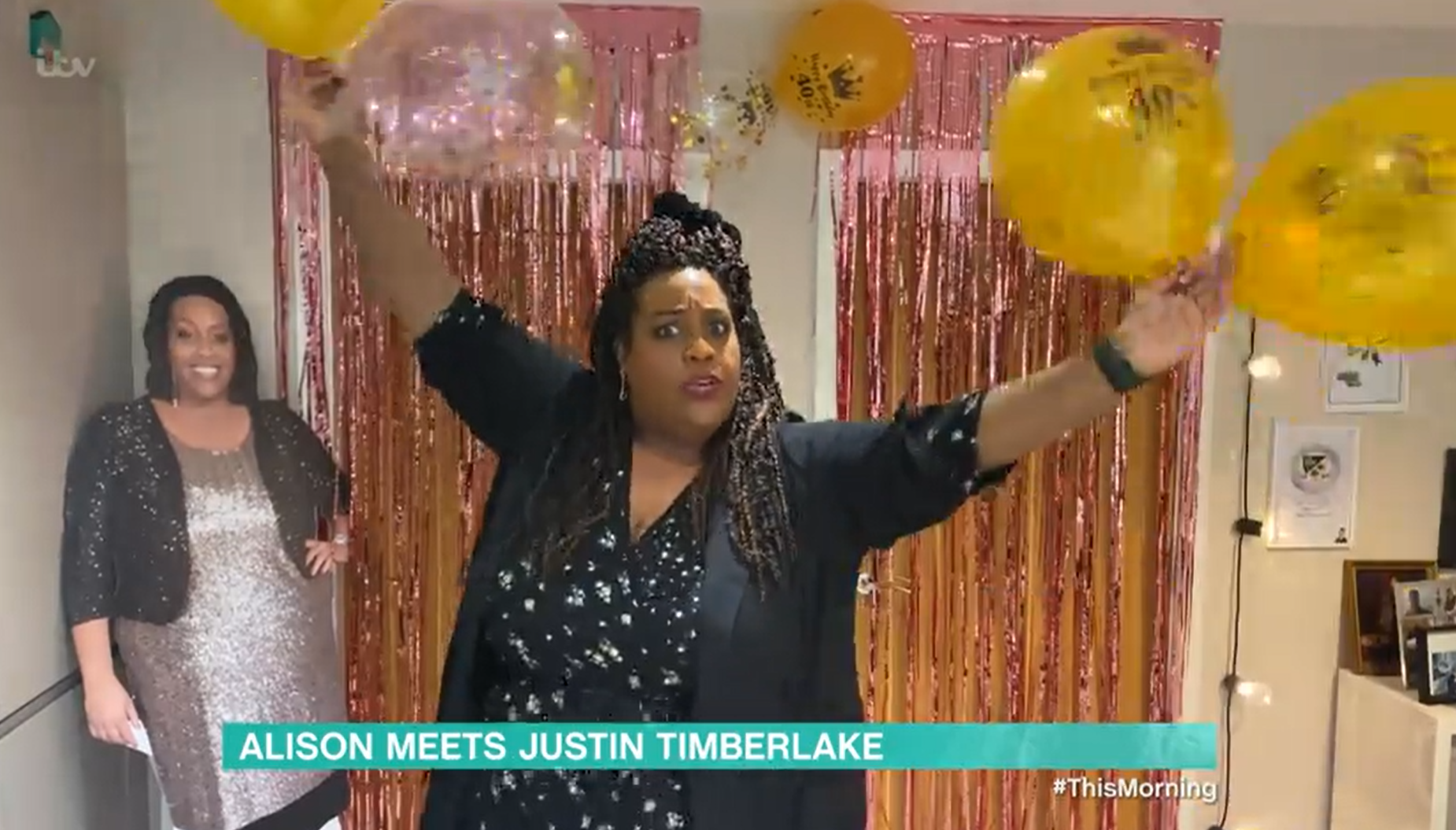 She went all out for the celebration 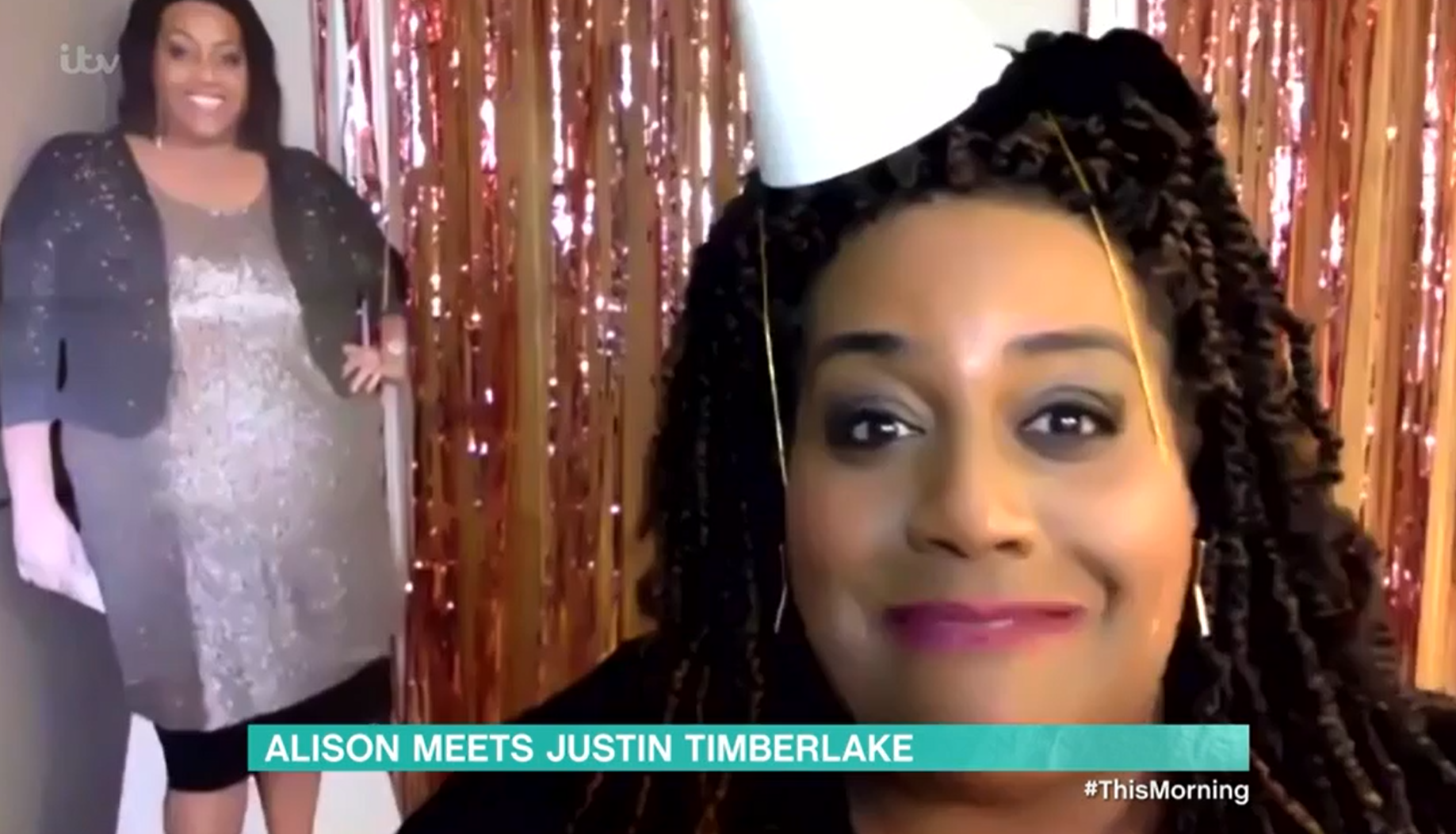 She surprised the star with a cardboard cut-out of herself

He went on to get the giggles as the host chomped on party snacks while he talked, asking if she was “enjoying” them.

Justin also played along when Alison performed three of his songs on the kazoo – guessing which titles they were correctly.

Alison rewarded him with a stunning birthday cake adorned with his face, and Justin couldn’t stop chuckling when it almost fell on top of her.

Fans at home were in stitches at the scenes, flocking to Twitter to praise Alison for the chat. 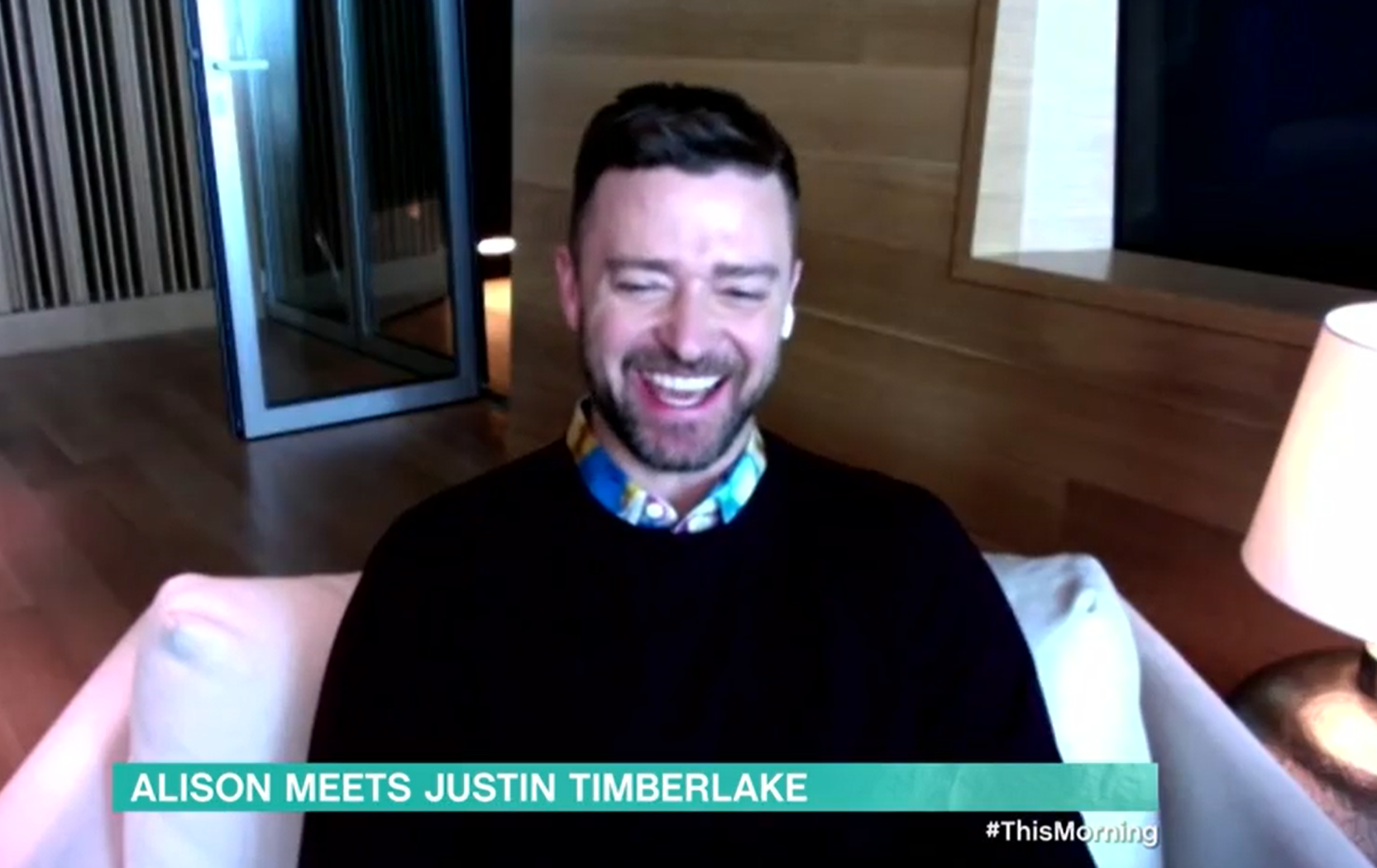 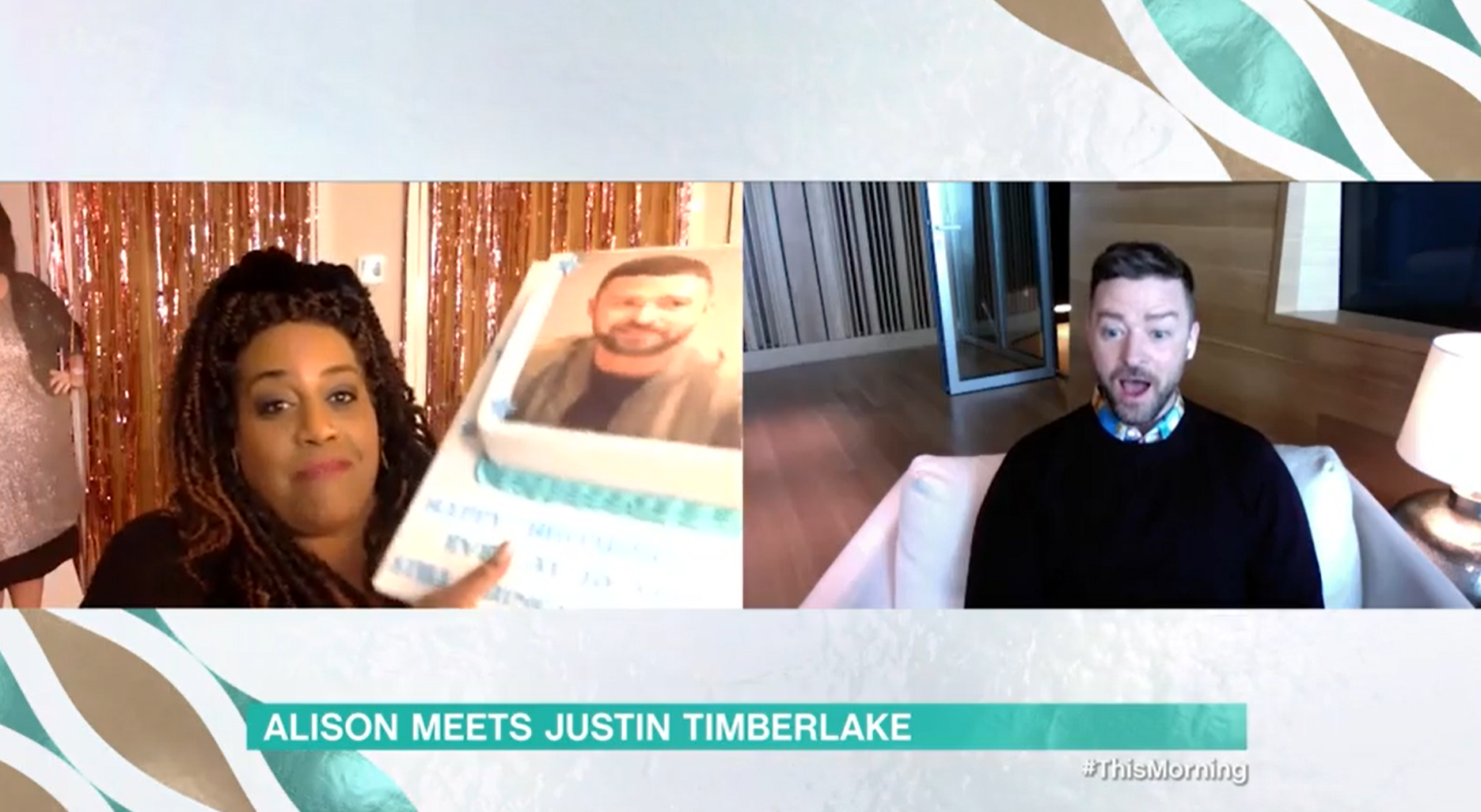 Another agreed: “Omg @AlisonHammond interviewing @jtimberlake has really made my day, she’s too funny.”

One more shared a crying-with-laughter emoji as they wrote: “Justin is thinking what the f**k is going on!”

Alison is renowned for her hilarious A-list interviews on This Morning, previously “marrying” Dwayne The Rock Johnson in 2017.

She was left “heartbroken” in 2019 when Dwayne served her with divorce papers after he married his long-term girlfriend Lauren Hashian.

The TV favourite has carried out other iconic interviews with stars such as Russell Crowe, Hugh Jackman, Tom Cruise, Harrison Ford and Ryan Gosling.

Dizzee Rascal will be on ‘Celebrity Bake Off’ 2021