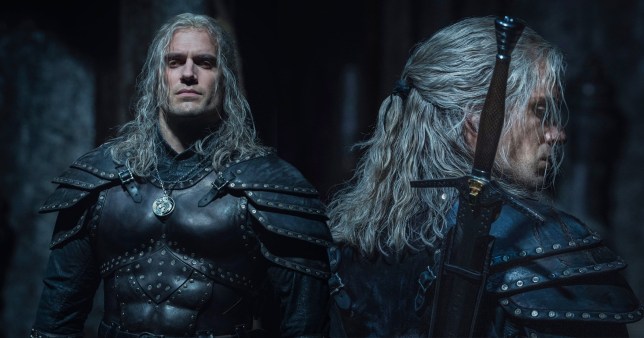 Filming on season 2 of The Witcher recently came to an end (Picture: Netflix)

One of the stars of The Witcher has revealed the exquisite gift he received from the lead of the fantasy series Henry Cavill after filming on season two came to an end.

Earlier this month, filming on the second series of Netflix’s The Witcher wrapped.

Starring Justice League star Henry as monster-hunter Geralt of Rivia, the upcoming episodes are set to be released later this year.

When filming came to an end, the Superman actor handed out some sentimental gifts to mark the occasion, with one of the actors in the drama sharing a photograph of it on social media.

Paul Bullion, who will be taking on the role of fellow Witcher Lambert in the show, posted a photograph of the recreation of The Witcher logo, which was presented in a box.

‘Well would you look at that. Geralt tossing a coin to Lambert,’ Paul tweeted.

‘Thanks Henry. You’re a gent. It was quite the experience filming during a pandemic wasn’t it?!’

He also added the hashtag #WitcherBrothers, clearly having formed a close bond with his co-star.

The Instagram account for Sophie Holland Casting, which worked on the casting for the series, also shared a picture of the same present.

‘Toss a coin to your… Casting Director,’ the caption read with a winking emoji.

‘Thank you @henrycavill for these beautiful keepsakes for SHC. We will cherish them.’

The second season of The Witcher will provide an insight on Geralt’s backstory, showing viewers how he came to be the ruthless hunter that fans have come to know.

Previously speaking to Business Insider, showrunner Lauren S Hissrich said: ‘You’ll learn a lot more about Geralt. You’ll get to know where he came from and why he is the person he is in season one.’

Season one of The Witcher is available to watch on Netflix.