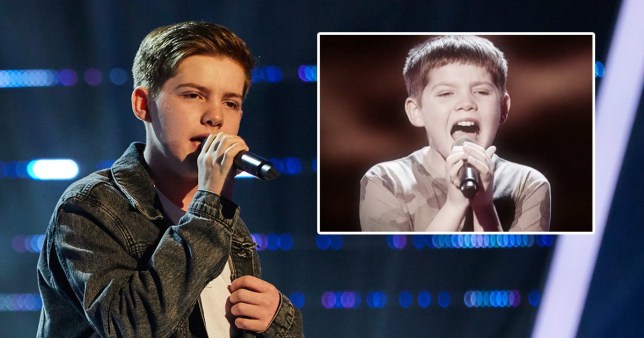 Jake McKechnie reached the final of The Voice Kids in 2017 (Picture: ITV)

The Voice UK coach will.i.am has expressed his regret after failing to turn for a former finalist of spin-off The Voice Kids.

In 2017, Jake McKechnie reached the final of the first season of The Voice Kids, having received a turn from will.i.am in the first round of the competition.

Four years after joining will.i.am on stage for a special group performance, now-16-year-old Jake wanted to see whether he could emulate his success once again on the main show.

On tonight’s programme, Jake delivered a moving performance of James Morrison and Nelly Furtado’s song Broken Strings, with the judges hovering their hands over the buttons on their spinning chairs.

However, no one decided to give him a chance, leaving him disappointed and his loved ones in disbelief.

After Jake left the stage, he expressed his hope that will.i.am ‘enjoyed the performance’.

‘I really enjoyed singing on stage again and I think I did as well as I could have done,’ he added.

As will.i.am reflected on the performance, he said that not turning was going to be ‘another one of those regrets’, with Sir Tom Jones replying: ‘Yeah definitely.’

The virtual audience informed the coaches that Jake is 16 years old and that he previously starred on The Voice Kids, leaving will.i.am in a state of shock.

‘Wowwwwww Jake is so so talented! He has grown up so much since #TheVoiceKids and I’m so gutted he didn’t get a turn for his #thevoiceuk audition!’ one viewer tweeted.

A few fans speculated that Jake may have been chosen had he appeared on an earlier episode, as the judges now have fewer spaces on their teams.

Wowwwwww Jake is so so talented! He has grown up so much since #TheVoiceKids and I’m so gutted he didn’t get a turn for his #thevoiceuk audition! He sang it so incredible and couldn’t of done anymore! The coaches got it wrong!!! Proud of you mate ð

The Voice UK viewers were left outraged at another point during tonight’s show when none of the coaches turned for 19-year-old Ella Young, who delivered a powerful performance of Defying Gravity from the musical Wicked.

‘Ella’s voice was incredible. I just don’t get or understand why she didn’t get a turn. Like come on,’ one person tweeted.

‘When you turn the voice off in rage because not one of the coaches turn for one of the best girls I’ve heard sing all night. You need to bring her back,’ another said.

The Voice UK returns next Saturday at 8.30pm on ITV.