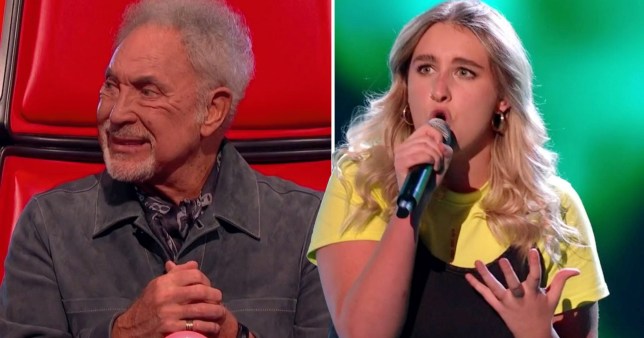 The Voice UK viewers have expressed their anger after a singer who performed an ‘incredible’ rendition of a song from the musical Wicked received no turns.

On tonight’s show, Ella Young, from Llandogo, Wales, took to the stage in an effort to impress Anne-Marie, will.i.am, Sir Tom Jones and Olly Murs.

The 19-year-old belted out Defying Gravity from Wicked, clearly impressing the judges with her powerhouse vocals.

However, none of them turned for her, leaving her disheartened as she left the stage.

‘It meant a lot, it meant a lot. It’s just it is what it is isn’t it,’ Ella said after her performance. ‘Even though no one turned I know I gave it my best shot.’

After revealing that he ‘almost’ turned for her, but was held back due to the number of people he already has on his team, Sir Tom then admitted his regret over not turning, saying: ‘That’s a mistake. She should have been here.’

Several people watching the talent show voiced their frustration over the coaches’ failure to keep Ella in the competition.

‘Ella’s voice was incredible. I just don’t get or understand why she didn’t get a turn. Like come on,’ one person tweeted.

‘When you turn the voice off in rage because not one of the coaches turn for one of the best girls I’ve heard sing all night. You need to bring her back,’ another said.

Some people remarked that in their opinion, singers who perform rock or musical theatre songs all too often miss out on spots on the programme.

WTF #thevoiceuk. No turns for Ella Young from Llandogo who just smashed Defying Gravity from Wicked. Best audition of the series.

‘We all know #thevoiceuk never go for #WestEnd or #Rock voices!!!’ one person stated.

A few weeks ago, The Voice UK viewers were left outraged when rock singer Kim Jennett didn’t make it to the next stage of the series.

A similar situation happened the following week, when rock singer Rebecca Watkins was not chosen by any of the judges, prompting some to call for a ‘rock judge’ to join the panel.

Last week, Sir Tom tweeted that he regretted not turning for singer Victoria Heath, who ended up joining will.i.am’s team.

Responding to Sir Tom’s comment, Victoria said: ‘Thank you for the beautiful comment!!!! And as I said I LOVE YOU! Soooo excited to be part of the @thevoiceuk and team @iamwill.’

The Voice UK airs on Saturdays at 8.30pm on ITV.