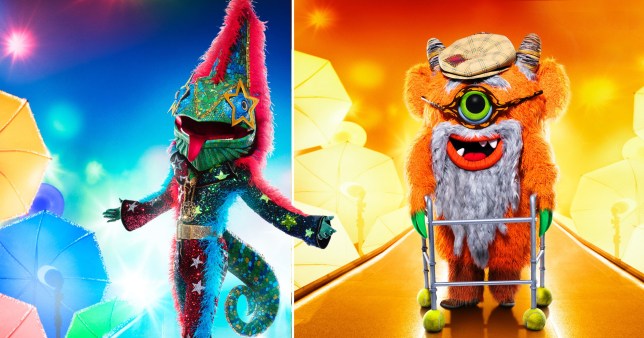 The Masked Singer US costumes are bigger and better (Picture: Fox)

The Masked Singer US has unveiled two brand new costumes set to appear in its hotly-anticipated fifth series.

Just weeks after LeAnn Rimes was named the winner of season four and production is already underway on the next chapter – and the masks are bigger and better than ever before.

One of the characters set to make their debut on the show next month is Chameleon. The costume boasts of a gorgeous green shimmered head with a fluffy pink spike and flared trousers.

Meanwhile, Grandpa Monster is another new addition to the cast. The adorable one-eyed disguise is bright orange and features a flat cap, grey beard and a monocle.

Of course, the outfit wouldn’t be complete without a zimmer frame.

‘Things are about to get scary on #MS5,’ teased the Masked Singer’s official Instagram teased.

This isn’t the first time a monster costume has been seen on the series. Rapper T-Pain won the first season of the show dressed as Monster, while Chaka Khan was under the Miss Monster guise in season three.

The fifth chapter of the beloved mysterious singing competition is set to kick off on March 10 without presenter Nick Cannon.

Instead, Niecy Nash will be temporarily taking over hosting duties as Nick tested positive for coronavirus when filming began.

She’ll be joined by judges Nicole Scherzinger, Ken Jeong, Robin Thicke and Jenny McCarthy, who are all returning.

Sadly though, the Masked Singer will be without a live studio audience for a second season due to the pandemic.

Fans will, however, be able to join in the festivities virtually and will vote for their favourites from the comfort of their own home.

The Masked Singer returns March 10 on Fox in the US.