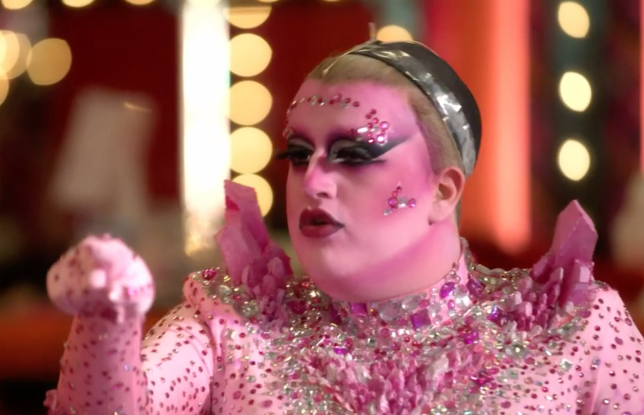 Reality TV contestants are too often left to the mercy of keyboard warriors and their barbed opinions (Picture: BBC)

Scrolling through Twitter during last week’s episode of Drag Race UK, the trolling and abuse about Lawrence, one of the four remaining contestants on the show, was hard to avoid.

The crime? Arguing with a fellow drag queen about the order in which they had told jokes to an audience of blow-up dolls.

The next morning we saw what has become a regular occurrence, as Lawrence’s fellow contestants took to Twitter to call for kindness. Sister Sister, a previously eliminated queen who is no stranger to online abuse, posted ‘a polite reminder that there’s another person on the other end of your tweet when you hit that send button.’

In a recent newspaper article, Sister Sister disclosed graphic and disturbing death threats that had led to their mental health reaching ‘rock bottom’. Fellow contestant A’Whora also revealed this week that being on the receiving end of trolling left them unable to eat for days.

Reality TV contestants are too often left to the mercy of keyboard warriors and their barbed opinions. Each week, a different contestant on a different show reaches breaking point; their mental health crushed beneath the weight of internet hatred.

Social media explodes with righteous fury then promptly forgets about it until it happens again five days later. The cycle repeats, and it is nothing new.

While auditioning for the 2019 series of Bake Off I remember lengthy briefings regarding internet trolling and how this might affect me. At the time, I shrugged it off – sure that I could handle uninvited opinions on my inability to avoid a soggy bottom.

I hadn’t accounted for the gut-wrenching feeling as you’re torn limb from limb online. Comments and opinions quickly shift from factual commentary to comments on your appearance, talent or personality.

Guys. The fact that you trolls have made Lawrence Chaney delete her Twitter because of the abuse youâve given her is DISGUSTING!
First Sister, now this. Itâs a fun TV show, the world is already negative enough without you trolls making a fun show something negative! DO BETTER!

More often than not, these are framed as jokes and each like or retweet is salt in the wound. It’s a tragic state of affairs where producers helplessly warn contestants of inevitable online bullying before filming has even started.

Yes, there is a responsibility from production companies who will be aware that certain edited narratives will elicit strong responses – but subdued storylines would be boring.

All television competitions require stakes in order to grab our ever-wandering interest. An episode of reality TV with no conflict would fall at the first hurdle – the real issue here is how viewers respond.

Alongside the sadly predictable homophobia, I faced trolling on my appearance, how I expressed myself, my background and (ironically) for pointing out the fact that I was being trolled.

It left me reluctant to join in with the frivolous jokes and memes online for fear that I’d stumble across a comment that would play on my mind afterwards, causing my stomach to drop without warning for weeks on end.

After the first two weeks I handed my social accounts to friends who’d send me a highlights reel, ignoring the murky messages from those wishing me dead (for baking cakes in a tent in Berkshire, I mean really?!).

And I had it easy. I remember comforting fellow contestants as they spoke in numb and disbelieving tones about the abuse they were receiving. A moment burned into my mind is when one of my friends confessed that they ‘just couldn’t wait for it to be over.’

This is the most saddening part of the entire situation. Those claiming that reality TV contestants are ‘asking for it by going on TV’ couldn’t be more wrong.

We compete to enjoy a unique experience, make new friends, and – let’s be honest – be on the telly! It’s something many people aspire to, applying with mounting anticipation and a thrilling insight into the inner workings of our televisions.

It’s devastating that such an exciting, once-in-a-lifetime opportunity can lead to lower lows than we could imagine.

Each year, we see contestants on various shows subjected to onslaughts of vitriol about their bodies, their professions and their personalities – and it doesn’t just happen to adults.

A five-year-old competing on Britain’s Got Talent last year was sent countless abusive messages, including those declaring that he ‘should have been aborted’.

This is the extreme end of a broad spectrum of bullying, which starts with calling someone ugly or untalented, and ends with wishing them dead.

Many of those challenged on their bullying comments fall back on the tired defence of crying ‘it’s just an opinion’, that it’s ‘free speech’ or that ‘you shouldn’t look if you don’t want to see it.’

In a sense, they are right. We are all free to have opinions, no matter how distasteful they are. The problem lies in posting them on public platforms – there’s a reason that the term for posting content online is to ‘publish’. With one click we broadcast our views to the entire world.

Social media is an interesting title – all too often we focus upon its social aspect but neglect to recognise that we are the media to which it refers. Twitter is a feed of endless tabloid headlines and we are the authors. We are responsible for words written under our names.

Last Thursday evening, I came across a Twitter thread from someone who had said something demeaning about Lawrence Chaney and who had been challenged on their comments by a number of other users.

Their response was to complain that it wasn’t fair to ‘gang up’ on ‘someone you don’t even follow’, and that ‘nobody usually takes notice of what they have to say.’

Setting aside the delicious irony that this person didn’t feel it was appropriate for people to engage with people they don’t know, this highlights an important point.

No matter how many followers you have, anything posted on a public account is visible by the entire world – including the person you are commenting on. And they will see it. I promise you they will see it.

So I’m not saying don’t have an opinion. I’m saying send it to a friend rather than posting it on a public forum where it will gain traction and cause hurt. It’s not tone-policing, it’s not oppression – it’s good manners.

If you find yourself defending something negative you’ve said online, think about why that is. Say the words out loud and imagine the person they’re about standing in front of you.

As the saying goes, if you don’t have anything nice to say, tell it to your friends and don’t post it on the internet. Or something.