WITH The Grand Tour being shown across the world, Richard Hammond is a global car star.

But when he finishes filming the motoring show in far-flung countries and returns to his wife and children, the 51-year-old petrolhead knows his place. 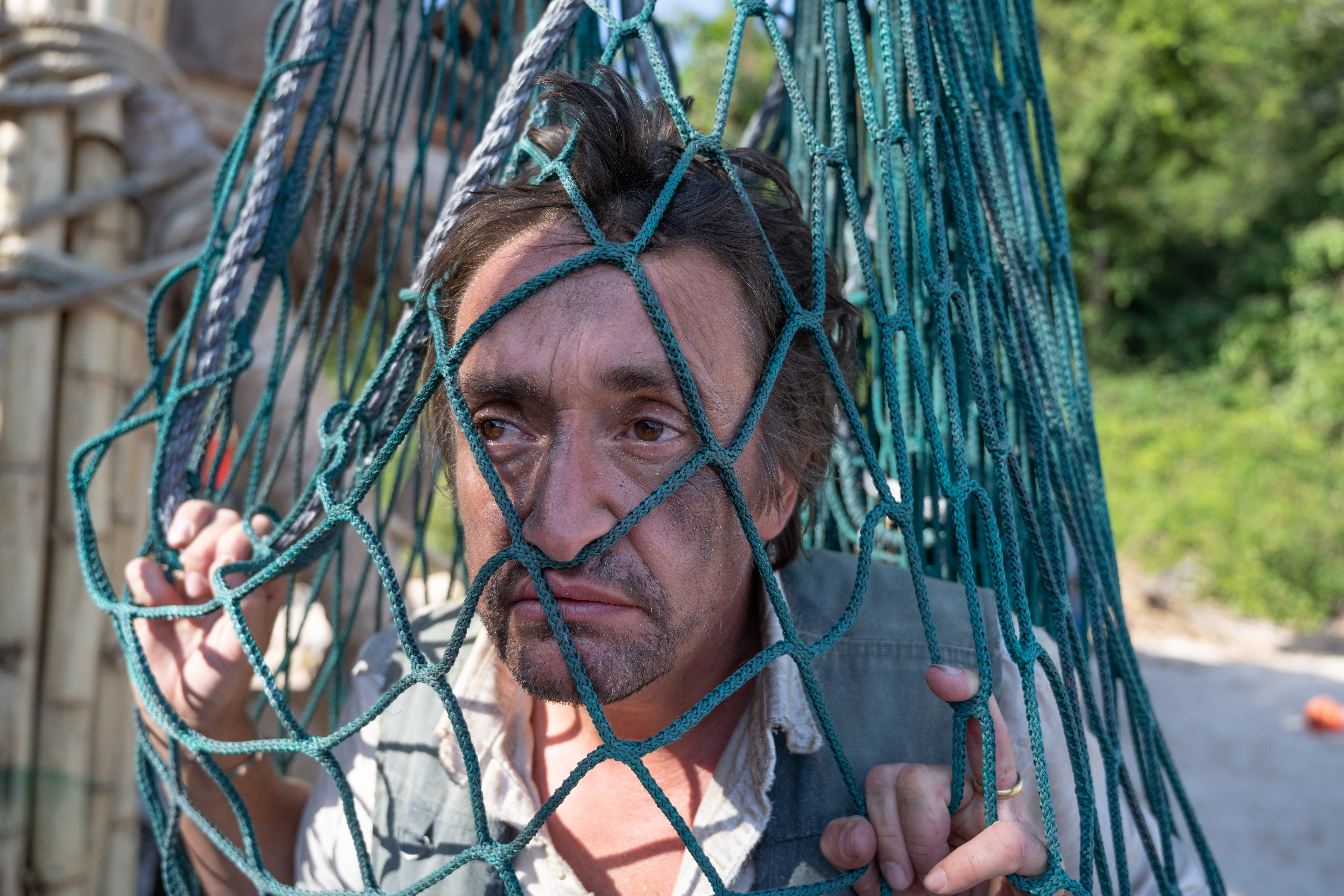 And that is right at the bottom of the pecking order at home in Ross-on-Wye, Herefordshire, where he has to do what his wife Mindy and daughters Isabella, 20, and 17-year-old Willow want to do.

In an exclusive chat, Richard says: “I don’t come home and expect the household to fit around me.

“We have a rule which we ­implemented when Izzy was born, that the house runs without me when I’m away, and when I come home I try to meekly find a place in it.

“It has always been like that and it is a subtle thing, a nuanced thing, but it is critical. 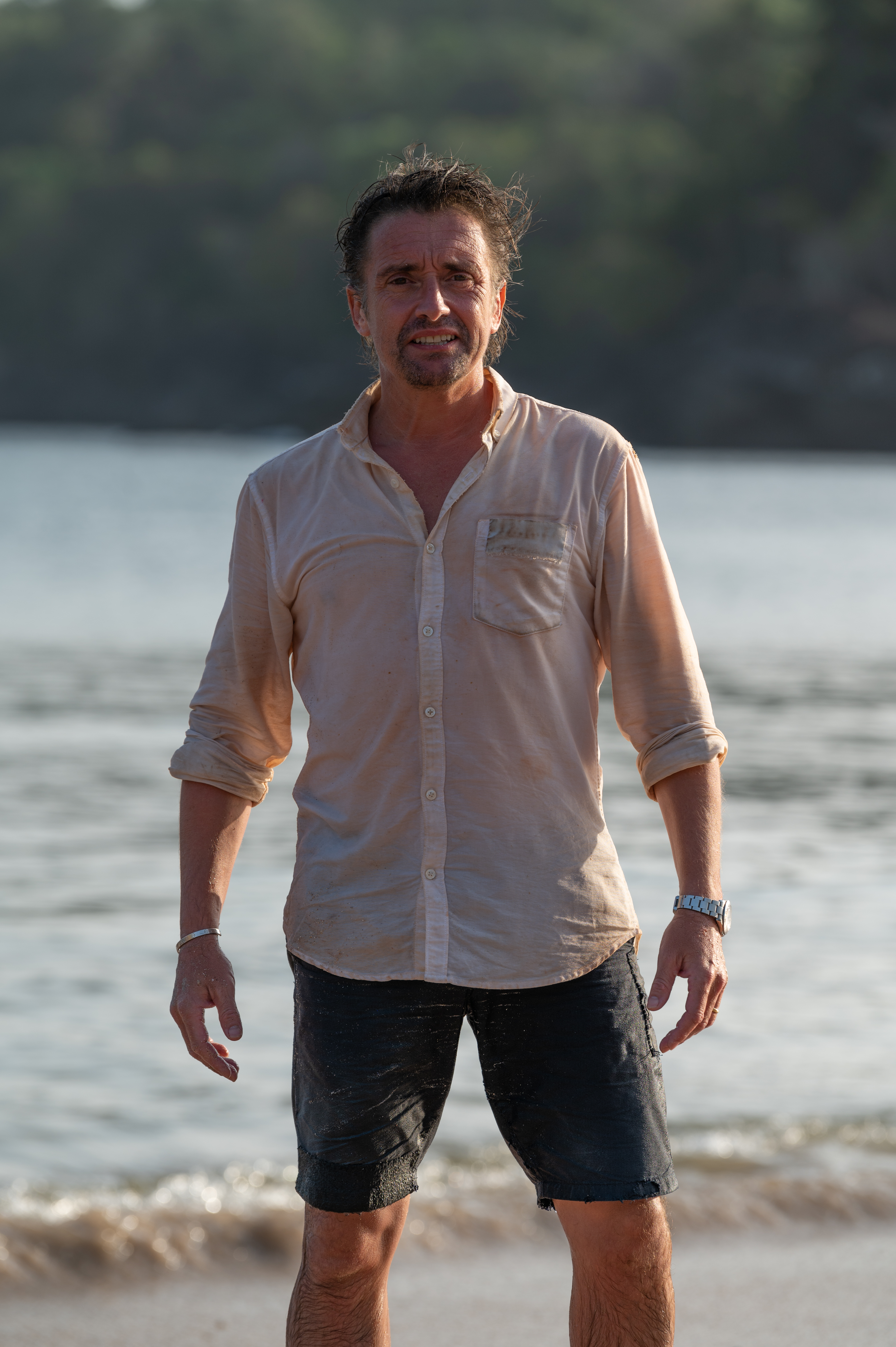 “I don’t walk in, sit down at the table and say, ‘Right, family, I am back.’ It’s more like, ‘Right, what’s happening, what do we do?’ and I just fit in. Otherwise there would be a massive hole when I’m away and everyone would miss me, and I don’t want that.

“I don’t want them to wake up in the morning and think, ‘Oh no, he’s not here’, I want them to think at some point during the day, ‘It would be nice to see Daddy’, but not to the detriment of their daily life. That would be catastrophic.

“The four of us are incredibly close but they can function equally as well without me.”

The travel restrictions due to Covid-19 have, of course, changed the running order in the Hammond household even further.

When the first lockdown happened in March, Richard had just finished filming his new Amazon Prime show The Great Escapists in Panama, and he has only made one film since — a Grand Tour special in Scotland. 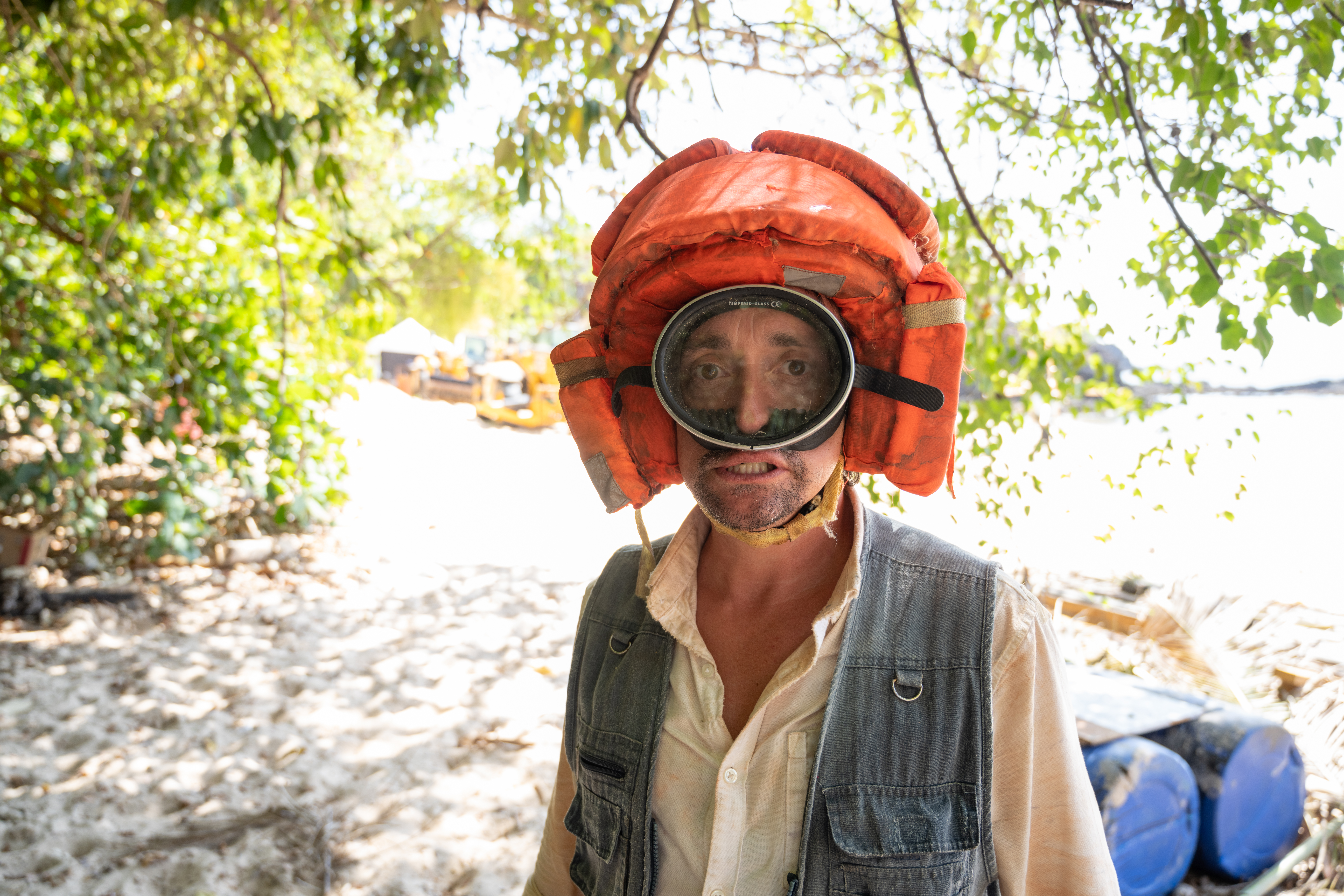 At one point Richard races in a self-built sand buggy, poking fun at his accident-prone reputation by shaping a makeshift helmet out of life jackets

The rest of the time he has been at home, and found it affected his family relationships — in a positive way.

He says: “I’ve been at home for the longest period of my life.

“So as a result I’ve done the school run most mornings. I’m always up first, then I kick the 17-year-old out of bed — that’s dangerous, I tell you — then take her to school and home again, walk the dogs.

“I think I’ve found a bigger place in the household. I think, like a lot of people, I will probably change the way I work as a result.”

Richard is chatting on Zoom to promote The Great Escapists — his first solo project as part of the big Amazon Prime deal he signed with his Grand Tour co-stars Jeremy Clarkson and James May. 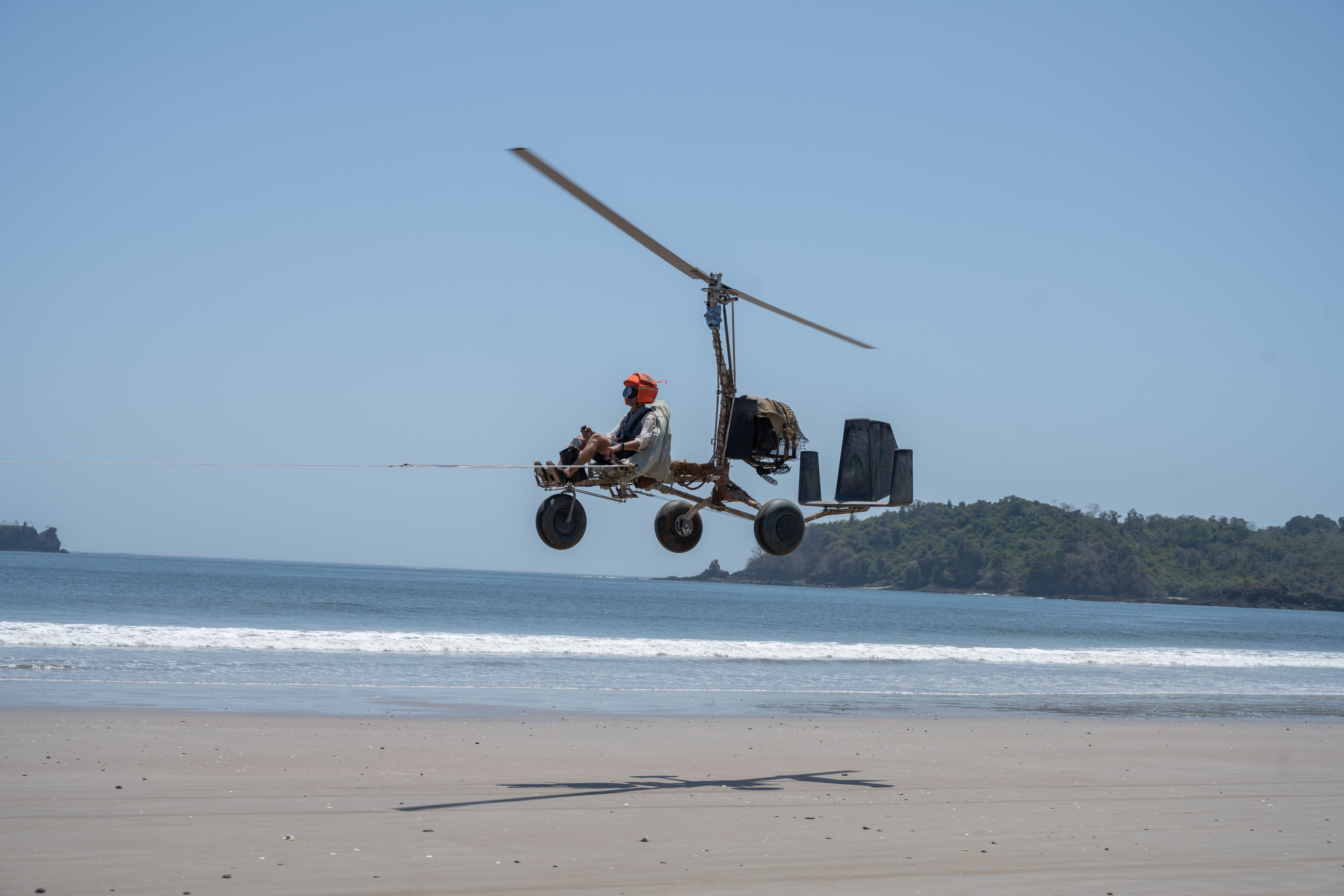 When the trio decided to stop shooting studio shows and concentrate on occasional films shot abroad, each was offered the chance to make a series on their own.

Richard chose not to go completely solo for The Great Escapists, instead teaming up with American TV presenter Tory Belleci, who hosts science show MythBusters on Discovery Channel. The new show’s drama-science hybrid format sees the pair pretend to be shipwrecked on a desert island.

They come up with a series of ­contraptions to help them survive on the island, using material found in the shipwreck and a washed-up sea container. They then explain the pop- science behind their inventions while also having fun working on more luxurious gadgets such as a pizza oven and a hooch maker.

It’s the first of two new series made by Richard’s production company Chimp — the other being Richard Hammond’s Big, on Discovery — and while he had clearly been working hard prior to lockdown, in the show he also looks the most relaxed and healthy he has been in years.

When quizzed about it, he admits he worked out every day on the ­balcony of his luxury Panama hotel which overlooks turquoise seas. 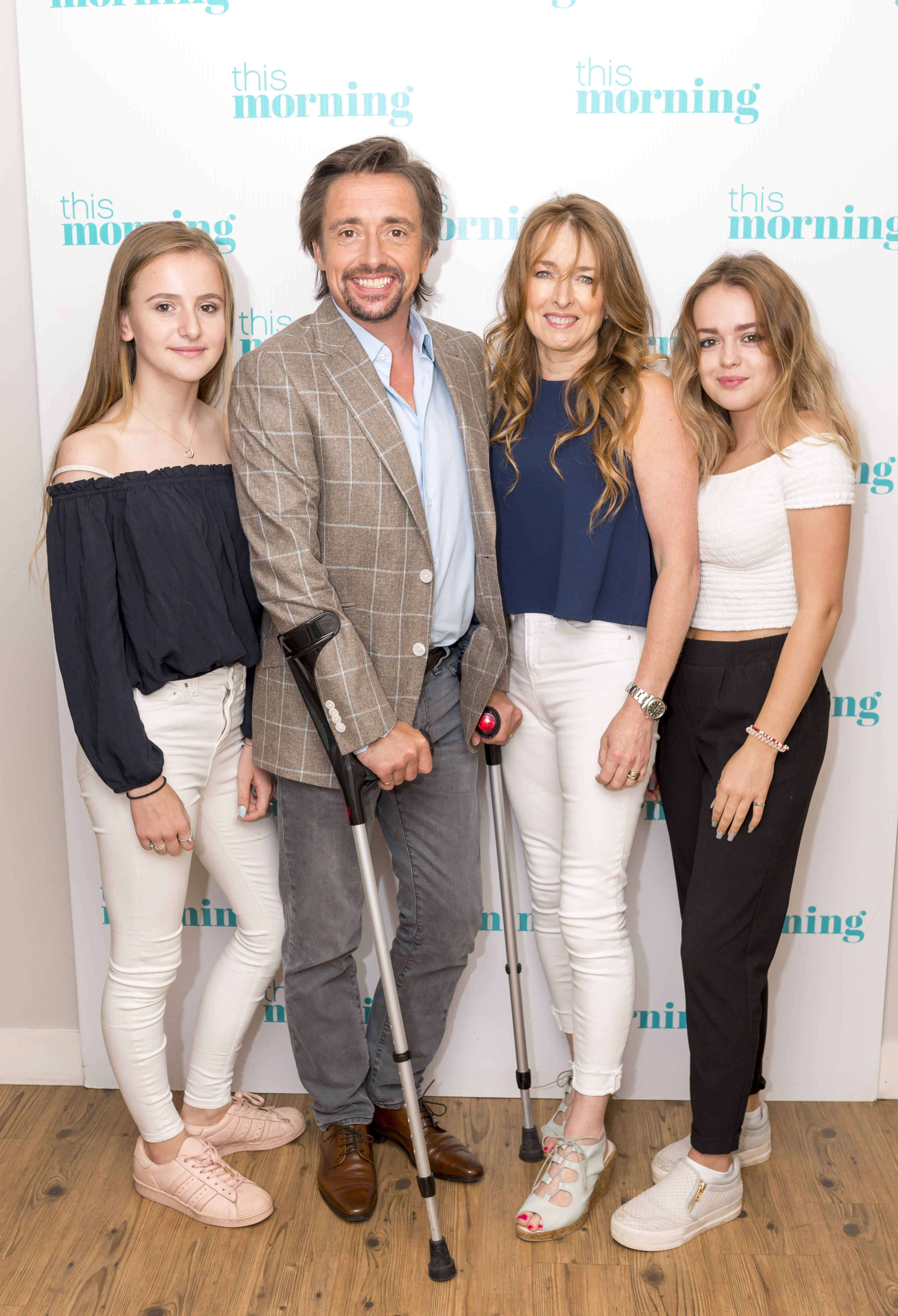 Richard with his wife Mindy and daughters Isabella and WillowCredit: Rex Features

Exercise has been important to Richard, even before his near-fatal 2006 car crash which left him with a brain injury. He says: “I’ve always had to exercise, even pre-brain injury.

“I have some adjustable weights and a bench on my balcony, not because I want to be beach-body beautiful but it is for my head.

“Post-injury, I was made aware of the sensitivity of neurochemicals in our brains. If you get up before work and do some form of exercise, ­whatever it is, you are sending a ­signal to yourself that you do matter, there is an individual here.

“You spend all day working with people and fitting into a machine and making sure it is functioning. But when I go for my run, I say hello to these beautiful lizards which stare at me, then hop into the water.

“Those moments are all about ­reaffirming to yourself that while you are a part of a machine, you are also an individual. I miss Mindy and Izzy and Willow and my dog and I think about them when I do some exercise or go on my run, and then I can afford to say, ‘OK, I’ve dealt with that and now I am going to take my place in that machine’. 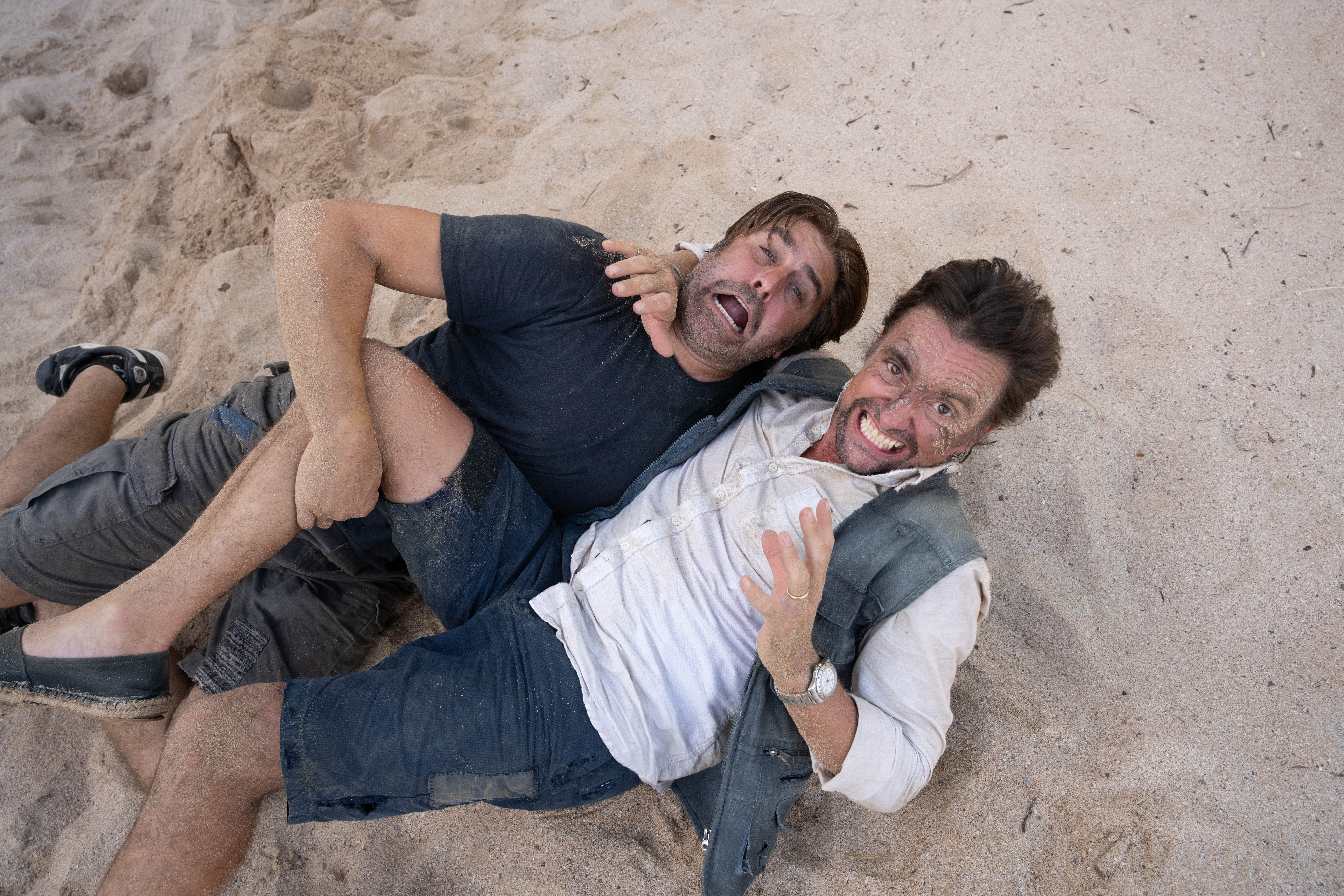 “When I’m out here it’s quite a selfish life, which is kind of basic — get up, do your job, go to bed. That’s all you think about.

“It means going home is an ­interesting experience because I have to then think about all of these other people. It takes me a while to depressurise.”

While The Great Escapists is much less dangerous than some of the escapades Richard and Co get up to on The Grand Tour, there are still some hairy moments.

They come across a huge whale shark while out in the water, and another scene sees Richard flying a makeshift gyrocopter. At one point he races Tory in a self-built sand buggy, poking fun at his accident-prone reputation by shaping a makeshift helmet out of life jackets found in the shipwreck.

But does Mindy find it amusing?

She was the one who had to nurse Richard back to health after his original accident, which left him — by his own ­admission — “totally crazy” and prone to temper outbursts and short-term memory loss. 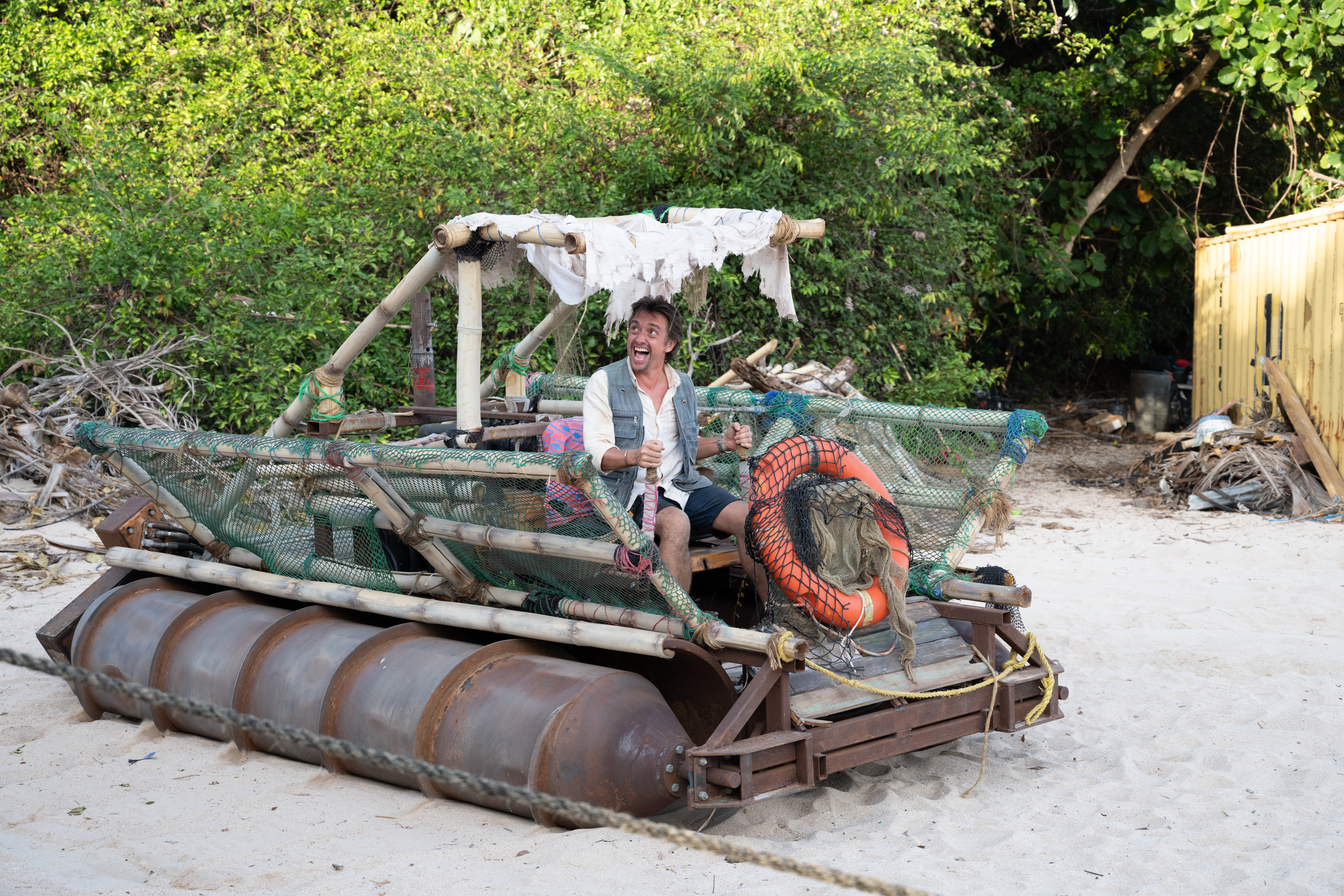 Richard at the helm of a makeshift boat

He adds: “She’s very trusting. She knows I’ve got far too much to live for to do anything stupid.

“I’ve got her and my daughters and my life and I don’t want to throw it away.

“I like to push it a bit, you know, I do like a thrill but I’m not thrill-driven. It was quite exciting when a whale shark came up to us in the water, but I wasn’t in danger. The most dangerous thing that’s ­happened to me recently was ­burning my bits in Madagascar filming The Grand Tour when I dropped a hot meal in my lap. That was very unpleasant.”

The Great Escapists is full of the usual Hammond humour.

He finds an old football in the shipwreck and jokes: “This leathery, out-of-shape old thing, we should call you Clarkson,” and turns the ball into a companion in a nod to Wilson, the volleyball that Tom Hanks befriends in the movie ­Castaway. Richard says of the ball with a laugh: “Frankly, Clarkson stole some of the scenes.” 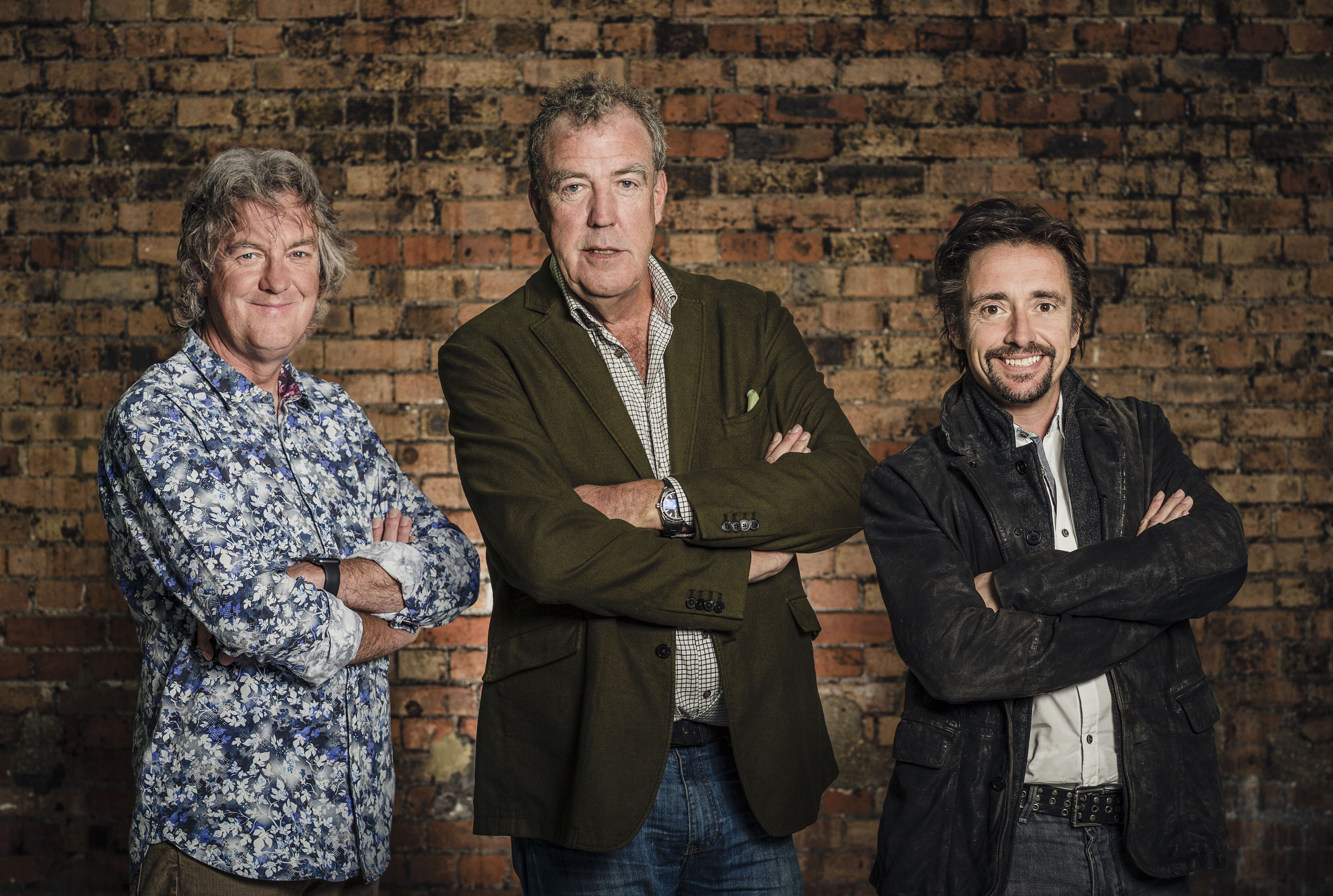 The Grand Tour team of James May, Jeremy Clarkson and Richard will be making more showsCredit: PA:Press Association

So did he tell the real Jeremy about this starring role? He adds: “I did, and he cackled. Wouldn’t it be ironic though if the awards ­season comes around and the show wins an award for best supporting actor and Clarkson gets it? I’ll be furious.” Other running jokes in the show include Richard saying: “Do you know who I am?” and having a selection of his own books for night-time reading. Is he so full of himself in real life?

Richard says: “People just wrote that stuff in and I’d go, ‘I appear to be an absolute twerp, that’s how you’ve written me’. Charming.

“I don’t know if it’s realistic. Am I a control freak? Yeah, probably. There’s some truth to it, I’m sure.

“I discovered that one of my oldest friends had been calling me Napoleon. He’d emailed someone saying, ‘We’ll just wait for Napoleon to make his mind up on that’ and he accidentally copied me in. I was like, ‘Have you called me that for 25 years?’ and he had. He calls me that to my face now, which is much easier.” If the show is well-received and commissioned for a new series, Richard is hopeful they will be able to make it safely with Covid precautions, given that it is filmed on an island where the crew are already ­effectively in a bubble.

That would mean being away from his family again — but that is something he is prepared to do. 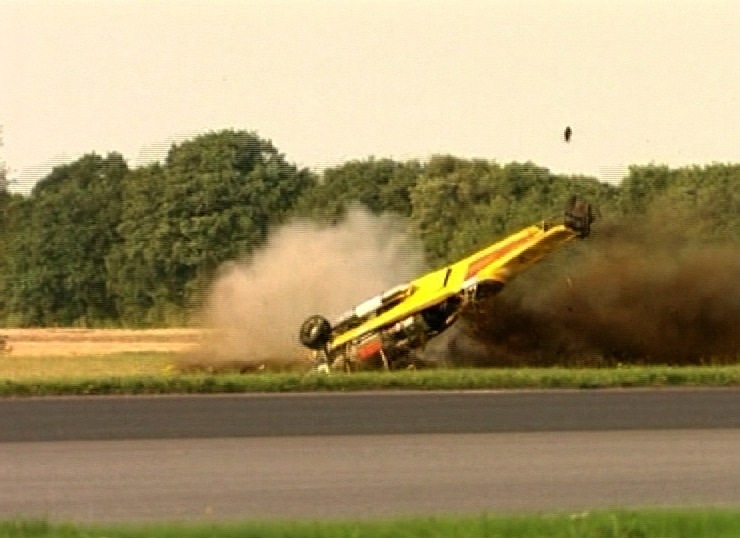 He adds: “I’ve never been so bloody nervous about a show going out. I’m more exposed, more ­vulnerable on this one than anything I’ve ever done.

“When we left I sobbed like a baby because that was a whole world that took seven weeks to build and we were tearing it down.

“We would do it again in a heartbeat. I just hope people like it, because it was intense to make.” 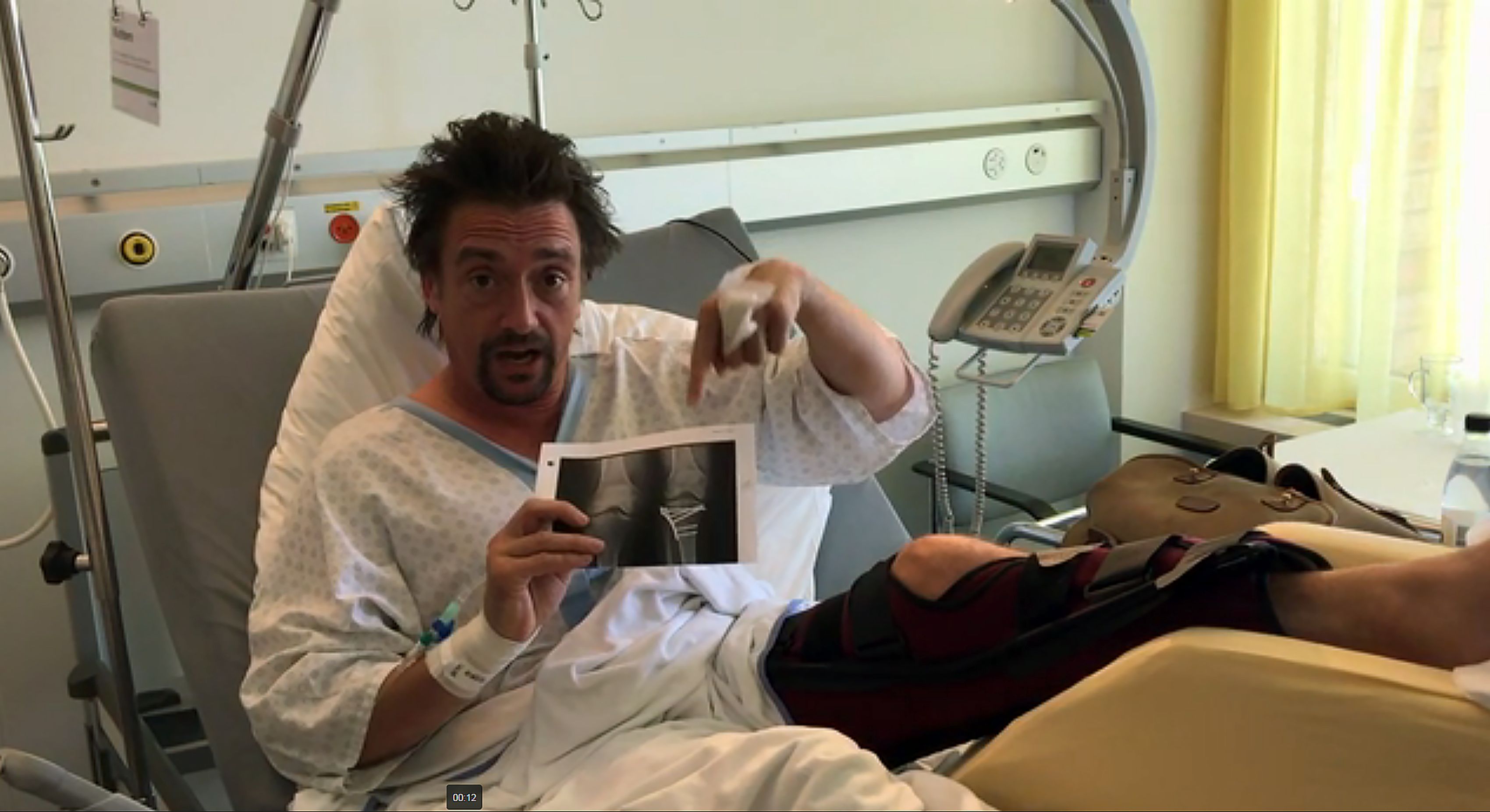 Richard in hospital after he was involved in another car accident while filming in SwitzerlandCredit: Handout – Getty 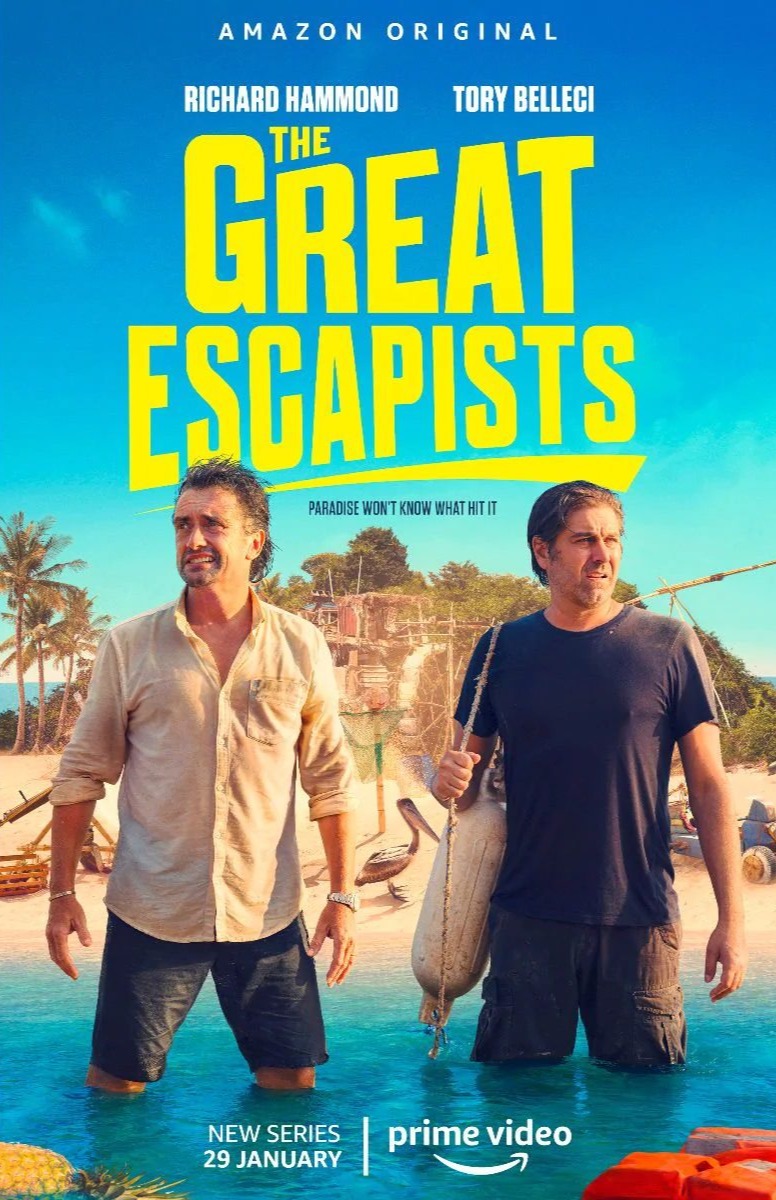 The Great Escapists launches on ­January 29 on Amazon Prime Video