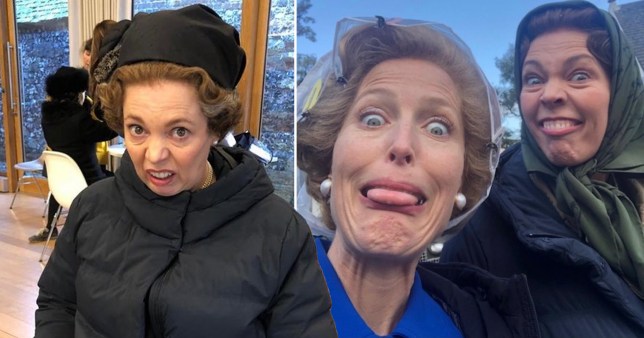 The Crown’s Gillian Anderson has wished her pal and co-star Olivia Colman a happy birthday in the best way – with a string of epic snaps from the Netflix series.

The 52-year-old, who played Margaret Thatcher in the drama, posted pictures of herself and Olivia, who played Queen Elizabeth II, to celebrate the Oscar winner’s 47th birthday.

One snap showed Gillian and Olivia in full costume, pulling goofy faces at the camera.

Another saw them enjoying lunch together on set, while one more showed Olivia in a puffy coat, looking deeply unimpressed as she pulled a face at the camera.

Gillian has made a habit of thrilling fans with behind the scenes snaps and videos from The Crown, including one iconic photo that saw her lounging across two thrones. As you do.

However, one video from set caused her a spot of embarrassment, after the cast got down to Lizzo’s Good As Hell.

It sees Gillian, Olivia, and their co-stars shaking their hips and sliding across the floor as Lizzo’s feel-good track plays in the background.

The best bit is they’re all completely dressed in character and were in the middle of filming a funeral scene.

Asked on Late Night With Seth Myers how the impromptu dance routine came about, Gillian, who recently confused fans with her accent, revealed: ‘Olivia apparently does a dance class in the area that she lives with a bunch of friends on a regular basis and the last time she did the class, they had danced to that Lizzo song.

‘And she asked if we would happen to be interested in maybe doing it and she would video it, and she would share it only with her friends and the other dancers. It was never meant to see the light of day.’

Feeling a little red-faced, Gillian joked: ‘I’m so humiliated. The look on my face, there is such delight and shame.’

There’s definitely no need for her to be – she absolutely smashed it, of course.

Pregnant mum-of-11 suffers morning sickness for the first time ever, admitting ‘I now know why people only have 1 or 2’