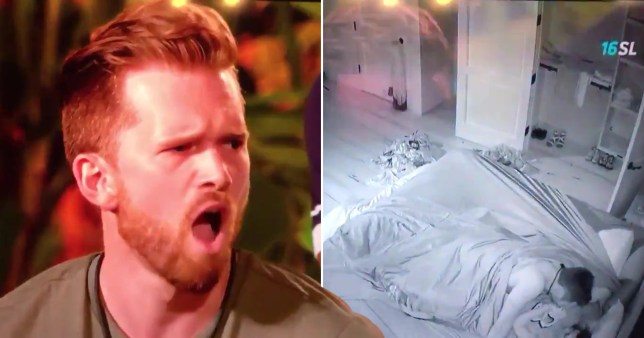 Temptation Island has gone viral again as viewers relive the moment when Casey watched his partner sleep with another man (Picture: E4/USA Network)

Temptation Island has viewers shocked all over again as a clip of contestant Casey Starchak watching his girlfriend have sex with another contestant has gone viral.

The dating reality show first aired in the States on the USA Network two years ago, however, the drama from season one has become a hot topic again as it is currently airing in the UK on E4.

The show has been hailed as ‘trash TV gold’ after viewers tuned in to watch couples test their commitment towards each other.

The couples head into a villa together before they get split up and instead find themselves spending time with a bunch of singletons – the aim of the game is to try not to cheat on their partner.

Casey and girlfriend Ashley Howland had been dating for a year and a half before entering the villa but Casey was left in tears after the dental assitant when on a date which ended up with her sleeping with another man.

Her boyfriend was shown the whole thing during a moment around the bonfire which left him, and the other men on the show, in complete shock.

Viewers flocked to Twitter to reveal their hilarious reactions to the savage moment.

One person shared a clip and wrote: ‘this show is so sick bra wtf you making a man watch his girl get d**ked down like this… the reactions from the other gents are killing me.’

Another commented: ‘Temptation Island is trash reality TV gold. I love this show.’

😭😭😂😂😂
Bro this show kills me…more especially the reactions of the other cast mates.

One fan commented: ‘his season was the best because homeboy was down BAD they caught him crying in the shower and everything.’

Temptation Island airs on USA Network in the US and is available on E! and E4 in the UK.