TEEN Mom 2 star Jade Cline was dubbed “unrecognizable” by her fans who speculated that she’s had “filler done.”

Fans pulled Jade apart in a forum on Reddit after a user uploaded a print screen of the star from her official Instagram Story. 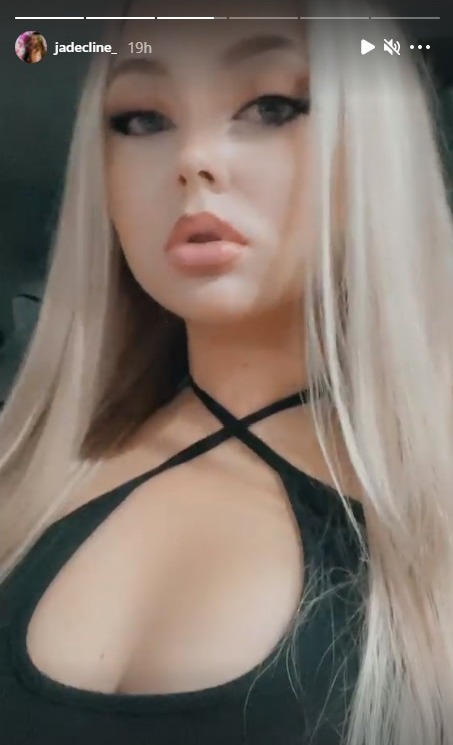 In the new clip, Jade can be seen posing for a selfie with what looks like a filter.

Her lips looked noticeably bigger as she opted for a pink glossy pout.

Wearing a black halter neck top with an orange butterfly on it, the star looked directly into the camera lens as she posed.

Jade wore her long blonde locks down and left her hair to tousle over her chest.

The user who created the mean thread to troll the star wrote: “Looks like she can’t close her mouth anymore – she really does look so much better without all the filters and makeup.”

People rushed to comment on the thread with many leaving harsh remarks about the star’s appearance.

One commented: “Totally not trying to be negative when I say this bc I think she is a beautiful girl, but when I saw this pic come up in my feed I tho someone had posted a blow-up doll. It’s pretty apparent she uses filters but I think she looks so much prettier naturally w/out them. Whatever makes u happy…”

Another said: “Jade is a whole different person in every picture,” while one added, “Is that jade? Jesus.”

Jade is not shy when it comes to talking about her changing appearance as she has documented her plastic surgery on Teen Mom 2.

The reality TV star could be seen sobbing in pain in the back of a minivan as she recovered from a Brazilian butt lift and liposuction.

Groaning Jade was seen in the footage crying in the back of the minivan as she’s driven home following her ops.

The star laid flat on her front, with only a mattress keeping her comfortable.

Jade previously told Pop Culture that she pushed herself a little too hard in her recovery as she looked after 3-year-old daughter, Kloie, at home.

“It was a hard experience, it was a hard journey,” she explained, adding that she was “so vulnerable” at “the worst points” of the surgery journey.

Jade was recently accused of using photoshop and “looking so different” after posting a glam selfie on social media.