Susanna Reid and Martin Lewis were moved by a video clip of a young Ukrainian girl singing the country’s national anthem onstage during a major charity concert, weeks after she first went viral singing a song from Frozen in a bomb shelter.

Introducing the clip on Monday’s Good Morning Britain, Susanna shared the ‘good news’ that Amelia Anisovych was now safe in Poland after fleeing Ukraine with her gran and brother Misha.

The seven-year-old was able to escape her home country’s capital city of Kyiv shortly after her first video gained huge interest, and the 51-year-old presenter explained that Amelia was back and sharing her voice once more.

‘Last night she stood on a stage and opened a major charity show in Poland singing the Ukrainian national anthem,’ Susanna explained, before they rolled the clip of the little girl’s confident performance.

Singing unaccompanied with a handheld microphone in a stadium, the audience stood silently holding lights as Amelia performed in a white dress.

‘Makes the hairs on the back of your neck stand on end, doesn’t it?’ remarked Susanna. 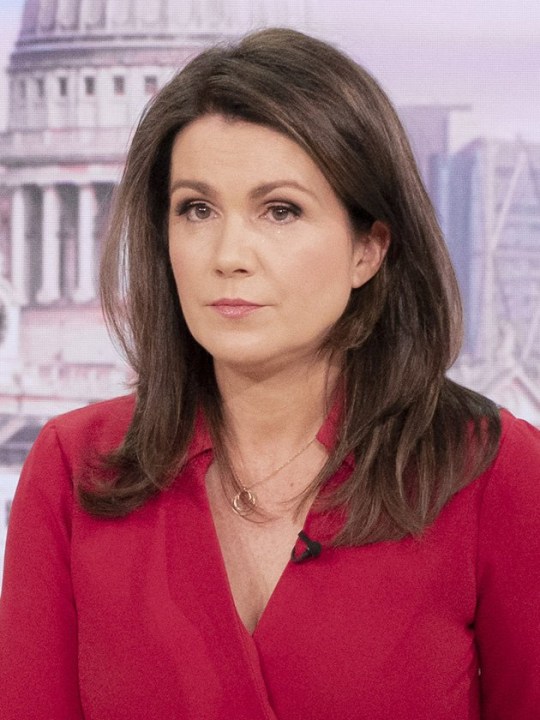 Susanna and co-host Martin praised her most recent performance too (Picture: Rex/AP)

Her co-host Martin agreed, praising Amelia as a ‘star’, and continued: ‘Sometimes they use the word star to mean celebrity. In her case it just means a shining light, doesn’t it? Gives you goosebumps.’

Congratulating Amelia on her singing once more, Susanna added: ‘She’s a symbol of hope, isn’t she, for the people of Ukraine. Well done, Amelia.’

Her Ukrainian language version of Idina Menzel’s famous Disney song Let it Go was first shared on Facebook by Marta Smekhova earlier in March, who said she had permission from Amelia’s mum and informed viewers that ‘even men couldn’t hold back the tears’.

Mother Lilia Anisovych, who made the tough decision to separate from her children and stay behind in Ukraine with Amelia’s dad Roman, subsequently said she was ‘very glad that the whole world heard my daughter’.

She added: ‘She sang as the voice of all the children of Ukraine. We hope to be heard in all parts of the world.

‘We hope that they will help us and our children will stop dying from the murders of Russian soldiers.’

Idina herself was one of several celebrities touched by Amelia’s performance, writing on Twitter: ‘We see you. We really, really see you.’

Meanwhile, Holly Willoughby was moved to tears after the clip was played on This Morning, as she struggled to voice her emotions over the heartbreaking clip.