Jamie Laing took a trip down memory lane by watching one of his dance routines on Strictly Come Dancing… and was mortified to discover ‘you could see everything’ through his extremely tight trousers.

For his very first performance with his professional partner Karen Hauer on the 2020 series of Strictly, Made In Chelsea star Jamie delivered a memorable Cha Cha Cha to viral song Think About Things by Icelandic singer Daði Freyr and his band Gagnamagnið.

The pair wore matching white outfits, Jamie, 32, in skinny white trousers, a sparkling top and a white jacket, and Karen, 38, in an asymmetrical playsuit.

On Saturday, Jamie shared a clip of the performance on Instagram, showing himself reacting to his first turn on the dancefloor.

In the caption, Jamie expressed his disbelief over how tight his trousers were, writing: ‘Why didn’t anyone tell me you can see everything through my trousers…..? Why!!’

In the comment section, professional dancer Oti Mabuse – who had been partnered with Jamie in 2019 before he had to drop out of the competition due to an enjoy – revealed that his outfit had actually originally been intended for comedian Bill Bailey, who went on to win the 2020 series. 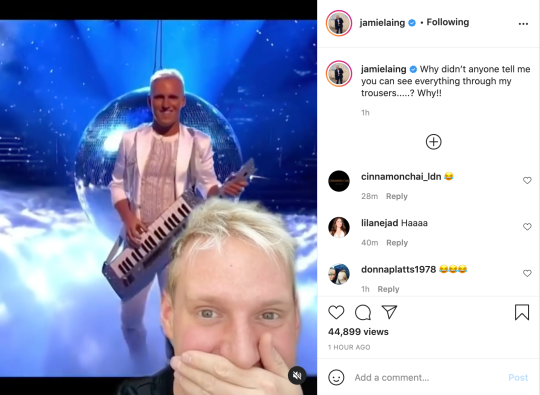 ‘Lol funny thing is they gave this outfit to Bill first,’ she wrote alongside a row of cry-laughing emojis. ‘We laughed so hard! But it’s genius on you #thetwins.’

While watching his first dance back, Jamie burst into laughter when he watched himself opening the routine with a wink, stating with incredulity: ‘What is that wink?!’

As Karen makes her way towards him in the dance from October, Jamie remarked: ‘Karen’s face when she knew I couldn’t dance is like pure fear.’

Karen joked in the comments: ‘Panic on my face… and yours too.’

As he continued to laugh over his dance, Jamie stressed yet again: ‘Why did no one tell me how tight my trousers were?!’

Several Instagram users commented that it was a good thing the trousers didn’t split.

‘I miss your dancing on TV!!’ another person said.

While Jamie and Karen only received a score of 14 out of a possible 30 for their Cha Cha Cha, they ended up reaching the final of the competition, where they went up against Bill and Oti, HRVY and Janette Manrara and Maisie Smith and Gorka Márquez.

Strictly Come Dancing is available to watch on BBC iPlayer.