It was a landmark moment! (Picture: Instagram/BBC)

Strictly Come Dancing’s John Whaite was a little emotional after making history with Johannes Radebe on the show last night, and we can’t blame him.

The pair received a standing ovation for their debut routine as they took to the ballroom as the show’s first-ever all-male partnership.

Dancing an intense tango to Blue Monday, John and Johannes were awarded an impressive 30 points out of a possible 40 from judges Anton Du Beke, Shirley Ballas, Craig Revel Horwood and Motsi Mabuse.

Speaking out the following morning, former Great British Bake Off winner John admitted he was in tears looking through the fan reaction.

‘I don’t know if it’s the slight hangover, but I’m crying reading all the lovely messages,’ he shared on Instagram, before showering praise on his professional dancer Johannes.

‘But mostly I’m so proud of @johannesradebe,’ John continued. ‘His courage to be unapologetically himself will inspire so many – he has certainly already inspired me.’ 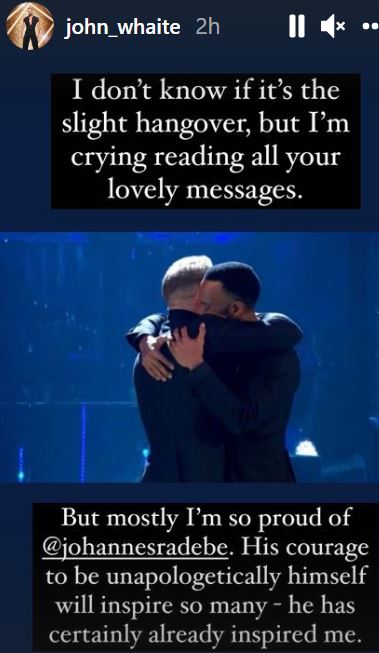 John was in bits over the positive reaction (Picture: Instagram)

John and Johannes immediately celebrated their landmark moment with champagne after the episode ended.

‘We did that, it was so amazing,’ Johannes said, before pointing to John and adding: ‘I’m so chuffed for this guy.’

‘It’s been a hard one but we’re very, very grateful,’ he continued.

John added: ‘I’m going to go and get drunk and have a kebab now.’

Last night’s Strictly saw television presenter AJ Odudu top the leaderboard alongside her partner Kai Widdrington with a score of 34 for her jive to Gold Dust by DJ Fresh.

Judge Motsi Mabuse hailed her routine ‘the best dance of the evening, without a doubt’.

No celebrities left the show during Saturday’s episode.

Instead, the judges’ scores will be carried over to next week when viewers will have the chance to vote for their favourite of the 15 couples.

Strictly Come Dancing continues on Saturday at 7pm on BBC One.