The actor and comedian danced the American smooth with his professional partner Karen Hauer and was awarded a comfortable 24 points for the pleasure, but the head judge wasn’t too impressed.

Giving her feedback, Shirley began: ‘Well, I’m a sucker for a man in a tail suit, you’re suave, you’re cool, you’re calm, and you’re collected and charismatic and great in open hold.

‘But too many [mistakes]… you’re on the wrong side of the body, the footwork’s not in the right space, there was too much rise and fall. Do you have the talent? Absolutely. Do you have charisma? 100%. But you have to have some fundamentals for me.’

The studio then fell silent with Shirley adding: ‘Just a few, I’m not asking for a lot, just a few.’

Greg has appeared to take Shirley’s comments in his stride and shared his reaction on Instagram.

Taking to the picture sharing site on Sunday morning, he shared a photo of him and Karen in action with the caption: ‘Got to say, I think that was the best we ever danced it.

‘Not quite sure what was wrong with my “fundamentals”, but criticism is fantastic. Makes you concentrate more…’ 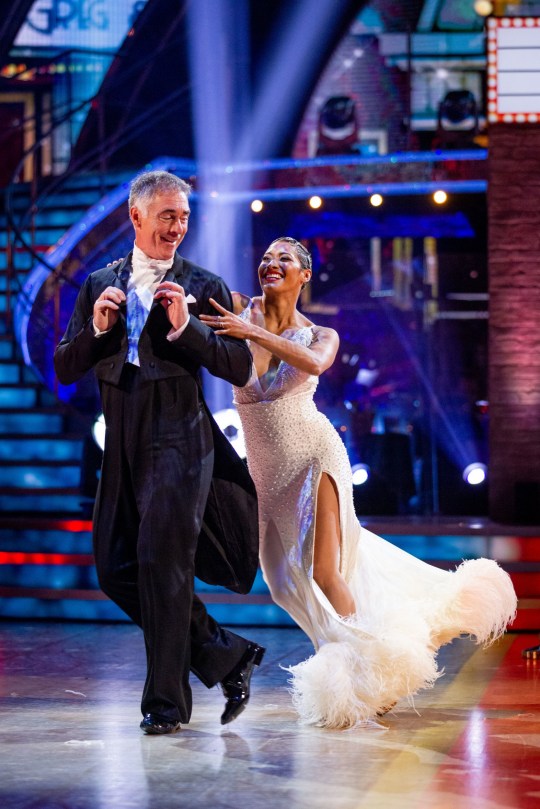 Although Greg and Karen found themselves in the middle of the leaderboard, it was AJ Odudu and Kai Widdrington who really impressed the judges.

The television presenter was awarded 34 points out of a possible 40 for her jive to Gold Dust by DJ Fresh.

Judge Motsi Mabuse hailed her routine ‘the best dance of the evening, without a doubt’.

No celebrities left the show during Saturday’s episode.

Instead, the judges’ scores will be carried over to next week when viewers will have the chance to vote for their favourite of the 15 couples.

Strictly Come Dancing continues on Saturday at 7pm on BBC One.