Dan and his professional partner Nadiya Bychkova are set to perform a couple’s choice dance on Saturday’s episode of Strictly Come Dancing, with It Takes Two’s presenter Rylan Clark-Neal noting the street element in their routine as the panel watched rehearsal footage.

However comedian Tom remained rather unconvinced by this point, as he exclaimed: ‘That doesn’t look very street – I’m not an expert, but that was the least street thing I’ve seen.’

With Rylan pulling his leg and joking ‘I thought you were the most street person I’ve ever met!’, Tom added: ‘That was like me going around a soft furnishings department, that’s how street it was!’

Dan and Nadiya will perform their dance to the song Classic by MKTO, with the 44-year-old broadcaster revealing earlier in the show that the couple had enjoyed ‘a bit of a breakthrough moment’ earlier on Friday.

Acknowledging the emphasis the judges put on confidence, Dan admitted: I’m not a dancer, but she’s convinced me that I can actually dance, and I feel like I’m really enjoying it for the first time.’


Tom also predicted Dan would be the next celebrity to leave the dancing competition (Picture: BBC) 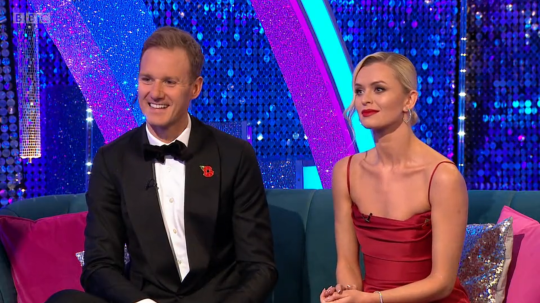 The pair’s characterful jive to Rock Lobster last Saturday nabbed Dan his first-ever eight, from judge Motsi Mabuse, and a solid overall score of 27, as judge Anton Du Beke praised how his performances were always ‘improving’.

The former Football Focus presenter also revealed his secret mantra for ensuring he takes to the floor on Saturday with the right attitude.

‘The idea is, I say to Nadiya beforehand – you won’t see this on Saturday – I’m trying to boost my confidence level, so I just whisper to her before we start: ‘Listen, I’m an amazing street commercial dancer, about to go out there and destroy this dancefloor. If you’d like to come [and] see if you can keep up with me, feel free.’ And then we’re off!’

It sounds like Tom, sadly, is yet to be convinced.