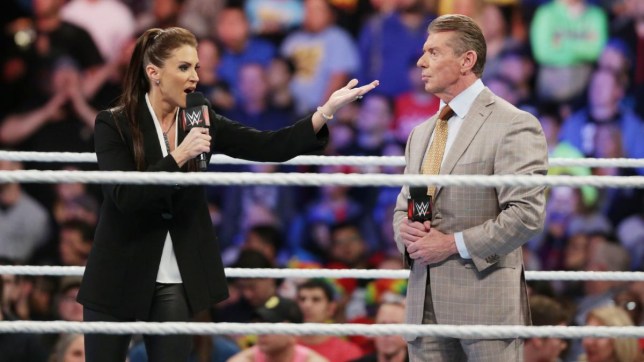 The company will be very different (Photo: WWE)

Stephanie McMahon has revealed how WWE might operate once her dad Vince eventually steps down.

The company’s chief brand officer admitted it will be all but impossible for one single person to replace the 75-year-old chairman given the amount of roles he fills.

Speaking to Bloomberg Business of Sports, she said: ‘I don’t think there will ever be a person to person replacement for Vince McMahon. He does too much.
‘The landscape would look different however it shakes out.

‘But I think it’s a marriage of institutional knowledge, the incredible production value, the creation of talent IP and storylines and really strong business executives to help us expand.

‘I think it’s a combination of things.’

Stephanie – who is married to legendary wrestler and current executive Paul ‘Triple H’ Levesque – also heaped praise on her own father’s legacy and work after taking over WWE back in 1982.

She added: ‘It’s really remarkable when you think about our history and what Vince accomplished.

‘Think about what he’s done. He took what was a regional business and had the vision to go around and create one organisation, nationally and then ultimately globally.

‘Ultimately he saw the opportunity to really create something that had never risen to the level of popularity it had never been.

‘Vince’s perspective has always been to be slightly ahead of the curve, you never want to be behind.

‘So that’s why we were one of the first, five years ago, to launch our streaming service, the WWE Network. We did learn a lot from that time.’

While fans and insiders have long suspected Stephanie and Levesque will have heavy involvement once Vince decides to step away, her brother Shane McMahon is also still involved as a producer.

He also recently returned to an on-screen role and is currently embroiled in a storyline with Braun Strowman which looks to be leading to a match at WrestleMania 37.