Stacey Solomon did not miss discussing scandals on Loose Women 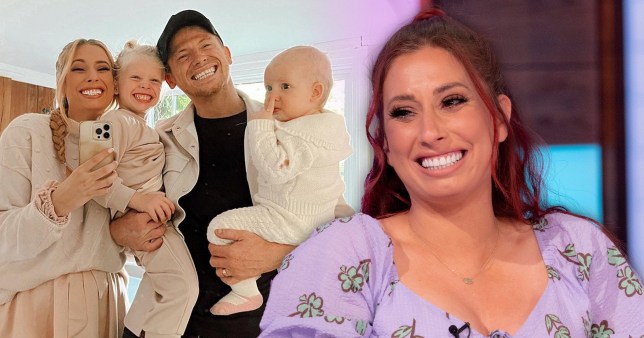 Stacey Solomon did not miss discussing scandals on Loose Women while she was on maternity leave (Picture: @staceysolomon/REX)

Stacey Solomon might be a favourite of the Loose Women panel, but she did not miss being at the forefront of scandals while she was on maternity leave with daughter Rose.

The ITV favourite and busy mum-of-four works in the full-on environment of live TV, with the panel often taking part in some of the most fiery debates of lunchtime TV and panelists encouraged to speak their mind on the breaking issues of the day.

Stacey herself went viral when she admitted she doesn’t understand why Britain is so ‘obsessed’ with the Royal Family, with her comments – which many agreed with – going viral again after the death at the late Queen’s Platinum Jubilee.Now

Now the star is back on TV after months on maternity leave with Rose, and is working with recipe box HelloFresh to help families avoid waste while cooking – but was there any drama over the last year she wished she had been on the panel for to give her two cents on?

Her answer is fairly assured: ‘Oh my God, no!’

‘That’s my worst nightmare,’ she admits to Metro.co.uk.

‘I hate the drama, I hate the scandals. I’d rather talk about everyday topics that everyone is experiencing. 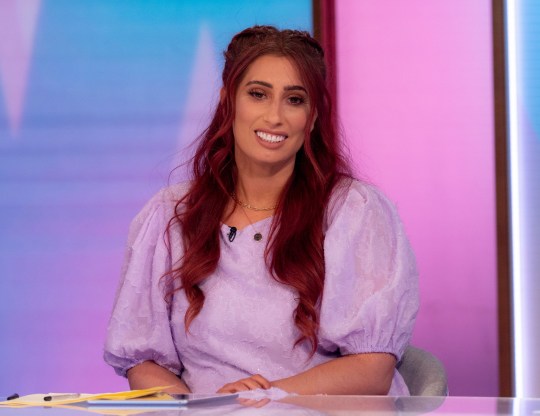 ‘When people get caught out in a scandal I almost feel sorry for them, because I’ve never met a perfect human in all my life. Nobody is this depiction of perfection. I feel really horrible when bad things happen to people or they get in trouble. I’d much rather talk about issues affecting everybody all the time than somebody’s scandal.

‘I just don’t think anyone is so righteous they’ve never done anything they’re not proud of,’ she goes on.

‘There’s room for error in everybody and sometimes we don’t allow for that. I don’t get any enjoyment out of anybody else’s misery. I don’t like “I told you so,” I don’t like “Oh, well, we saw that coming.” I don’t like it – it doesn’t make me happy! I much rather talk about issues that need to come to the forefront rather than focusing on anybody else’s downfalls.’

Last year, Stacey missed out on the National Television Awards as she was pregnant with Rose, and this year missed out again as she was filming Sort Your Life Out and giving a talk about menstruating.

‘I was gutted,’ she admits. ‘I could have really done with a night out with the girls!’

And as for the Loose Women panel’s distinctly unimpressed reaction to losing out on an award to Phil and Holly, Stacey just laughs.

‘This Morning win every year! I don’t know why they thought they would have won!’ 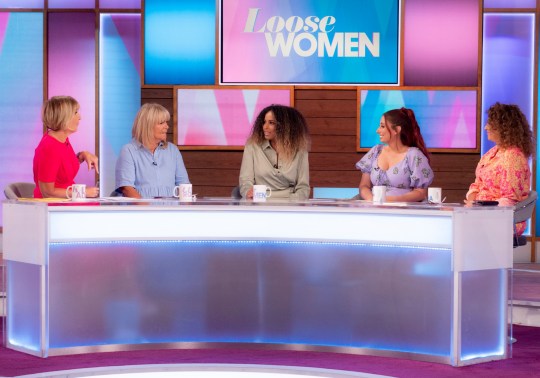 The daytime chat show was nominated for an NTA but lost out to This Morning (Picture: ITV/REX/Shutterstock)

Away from the glitz and glamour of red carpets and award shows, Stacey adores family life at home with her children Zachary, 14, Leighton, 12, Rex, three, and Rose, one – and, of course, her husband Joe, who she describes as her ‘best mate,’ even if they do get competitive in the kitchen.

Speaking about the HelloFresh campaign, in which Stacey and Joe are encouraging families to get creative – and competitive – in the kitchen, Stacey laughs: ‘We’re competitive in everything, it’s part of our relationship!

‘People probably think it’s really strange but we get a lot of enjoyment out of going up against each other. It can be so stupid – if we’re making gingerbread with the kids we get competitive, but it’s not even about the kids, it can be pumpkin carving – even the school run, who does it better. It’s something we thoroughly enjoy.

‘I love him. It’s funny – I do feel like he’s my best mate. We have such a laugh together and we can take the mickey out of ourselves and each other.

‘We were laughing the other day because we were melting chocolate in the oven. And it was really slow to warm up and we were standing there just looking at the oven and realised we hadn’t said a word to each other in ages.

‘And it was like “I know babe, what are we going to do when our kids are grown up, what are we gonna talk about – we can’t even wait for chocolate to melt in the oven!” 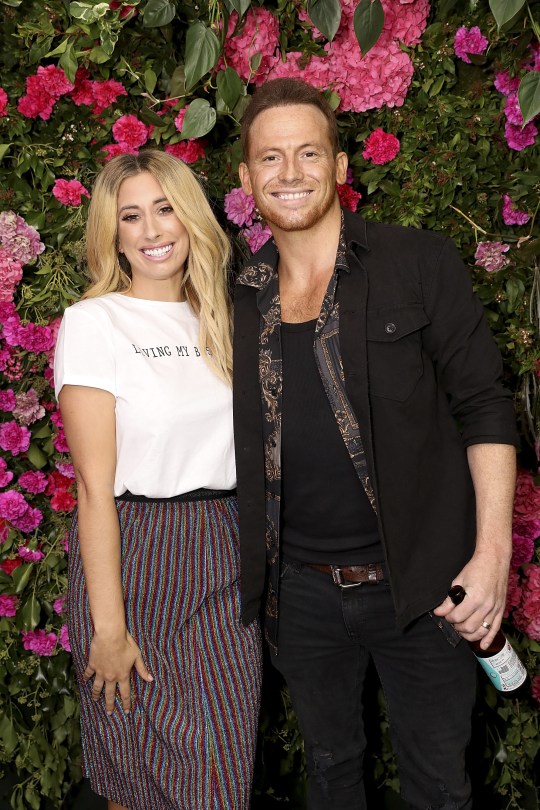 Joe and Stacey were married at home in Pickle Cottage this year (Picture: Getty Images for Primark)

‘We were laughing about it. But that’s who we are together and I love it. I love that we can sit together and say absolutely nothing, just not say a word to each other and it still feels comfortable. It never feels awkward, it’s just nice, just saying nothing.’

‘Ours is one of those houses where if you don’t get involved you don’t get anything,’ she laughs as she’s asked if the kids help out at mealtimes.

‘Everyone has to muck in. There are loads of us, and Joe and I both work and our work is quite sporadic so we can be all over the place. From the beginning, we just said to the kids that everyone’s got to do their bit and everyone has to chip in.’

‘When I was growing up, most of my memories are centred around the dinner table,’ she recalls.

‘That’s what I remember, us all congregating together. I’m one of seven so I’m from a large family as well. It was the only time of day that we all got together and spoke to each other. Those are my best memories, of being around the dinner table. And that’s what I want for my kids.

‘We’re not always here – I work away, Joe works away. So when we are together and we are at home, it’s really important that at some point in the day we get together and enjoy time with each other, and dinner time is when we get to do that. 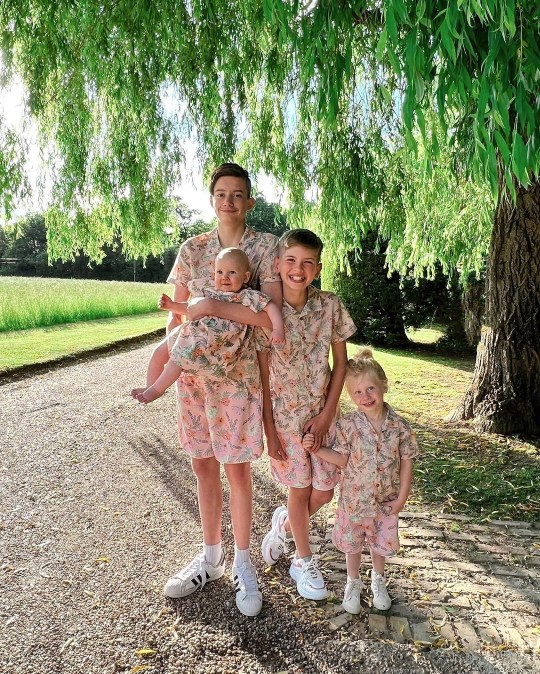 The Solomon-Swashes find it important to sit down and eat together (Picture: Stacey Solomon / Instagram )

‘It’s pure chaos while we’re cooking… but once dinner’s on the table, it’s like radio silence and everyone just eats. And then we get to spend a bit of time together. I love it. It really is my favourite time of the day.’

Cooking might be one thing, but the mum-of-four admits she isn’t the best baker, and will only take part in decorating her children’s cake for their first birthday.

Having made the decorations for baby Rose’s first birthday earlier this month, Stacey describes it as ‘an absolute abomination.’

‘When my mum used to make our cakes, she was just amazing at it. I always wanted to be that mum. And then after I had Zack, and then again with Leighton, I quickly realised I’m not very good with cakes.

‘So they only ever get one from me – their first birthday, one they won’t remember, so they’re not too traumatised by my terrible cake skills!’

Rose celebrated her first birthday shortly after Stacey returned to work with Loose Women and other TV projects, as well as releasing her newest book, Tap to Tidy at Pickle Cottage.

And while she ‘absolutely loves working,’ ‘loves my job’ and feels so grateful to even have a job’ in the entertainment industry, she admits it’s hard leaving her family.

‘It’s always one of those things where you love your job but you also miss your family. But it is what it is and I’m just so glad that I get to do what I do.’ 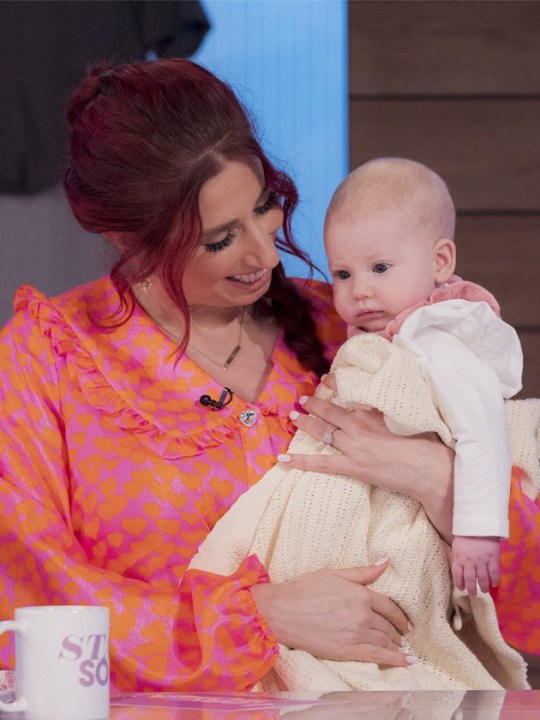 Stacey loves her job but says it’s OK to feel sad you’re no longer spending all your time with your baby (Picture: Rex)

And as for other new mums worrying about the end of their maternity leave creeping closer, Stacey has some advice: ‘Don’t put loads of pressure on yourself.’

‘Don’t put pressure on yourself to enjoy maternity leave just because you know you’re going back, because as much as you love maternity leave and when you look back it’s got this hazy glow, there’s definitely moments where you’re exhausted, and your hormones are everywhere, and you’re down some days and that’s OK.

‘See how it goes, take every day and every hour at a time.’

Stacey and Joe are working with HelloFresh in a bid to encourage families to get creative in the kitchen and create less waste thanks to pre-portioned ingredients.

UK has ‘failed to prepare’ for extreme weather from climate change