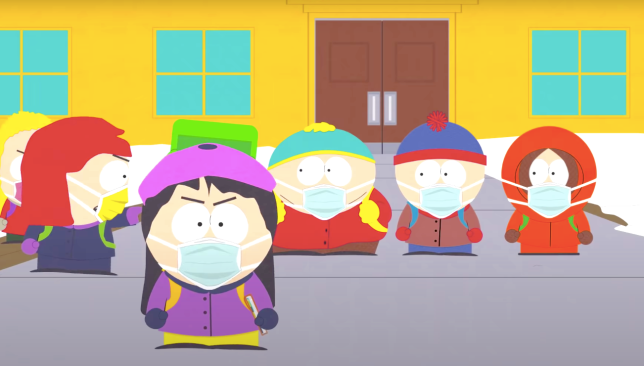 A new teaser trailer for South Park’s upcoming vaccination special has been revealed – and it’s shaping up to be the shot in the arm we could all use right now.

The hit comedy addressed the outbreak of the coronavirus pandemic with a special episode last year, and it’s only fitting that it should focus on vaccinations in 2021.

The hit animation will take a sideways look at the coronavirus treatment rollout next week, with the new hour-long ‘South ParQ Vaccination Special’ premiering on Wednesday, March 10 at 8/7c on Comedy Central.

As the Q in the title of the episode implies, the episode will also be focusing on QAnon conspiracy theorists.

The controversial conspiracy theory claims there is a band of Satan-worshipping paedophiles in the public eye – we can expect it to get a skewering in the upcoming episode by South Park creators Trey Parker and Matt Stone.

‘Get all the vaccines you can and bring them here, and you might just get your teacher back,’ Mr Mackey says in the new clip.

‘He’s offering us $2,000 for a vaccination,’ Randy also says, pointing at his phone.

The official description of the episode reads: ‘The citizens of South ParQ are clamouring for the Covid-19 vaccine.

‘A hilarious new militant group tries to stop the boys from getting their teacher vaccinated.’

South Park is known for addressing current affairs in its episodes, and it was only a matter of time before it addressed the pandemic last year. 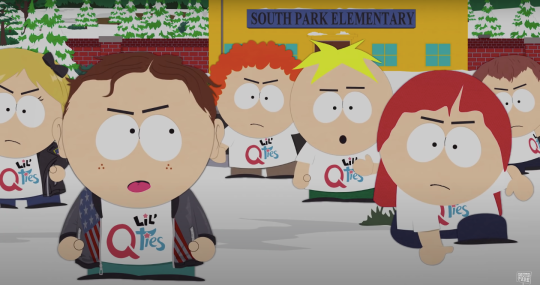 QAnon conspiracy theorists will be tackled in the new episode (Picture: Comedy Central)

The first episode of South Park’s 24th season in 2020 was ‘The Pandemic Special’, which focused on Randy and the residents of South Park as they learned to cope with the virus.

The episode saw Eric Cartman reeling about having to go back to the classroom after months of remote learning.

Meanwhile, Rick and Morty creator Justin Roiland has spoken about upcoming episodes of the hit animation, saying that he won’t be following South Park’s lead over the coronavirus pandemic.