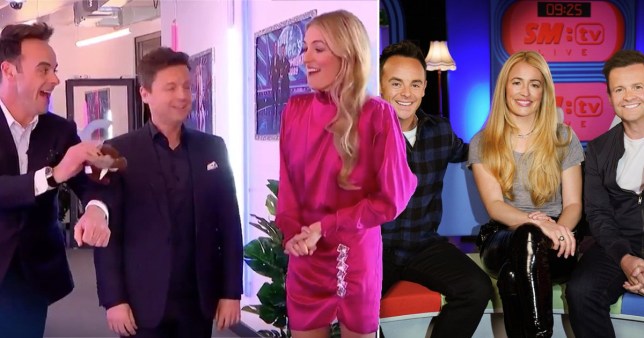 Fans of Saturday Night Takeaway were left feeling nostalgic for SM:TV Live as Cat Deeley was reunited with Ant and Dec on the show.

Cat was the special guest on the show, after the presenting duo pranked her last year to get her to come on to Saturday Night Takeaway.

Ant and Dec sabotaged a photoshoot for the promotion of Cat’s children’s book, The Joy In You, without Cat’s knowledge.

Firstly, the pair made Cat wait outside the studio at a red light for no reason, before they put a smelly fish pie into a microwave in her dressing room.

Ant and Dec then sent a helper in to spray tonnes of air freshener around to mask the smell, with Cat exclaiming: ‘She probably thinks it’s me!’

The pair then snuck themselves into her photoshoots and video shoots for the day via a host of elaborate disguises.

Ant and Dec’s big reveal came after Ant – dressed as a giant koala – knocked a candle over, setting fire to the set, and it’s safe to say Cat was not expecting those two to pop up in her shoot.

The three of them also created a special Chums sketch in homage to their famous segment on SM:TV Live, which was inspired by Friends.

As well as Ant, Dec and Cat, they also enlisted a host of celebrity pals including Sting, Brian McFadden and Emily Atack.

Watching Cat with Ant & Dec again is like reliving my childhood! I used to love watching the trio together! Reminiscing fondly over here guys…….ð¤ð Sooooo excited for my kids to watch Wonkey Donkey with me tonight ð @itvtakeaway #antanddec #saturdaynighttakeaway

I am LOVING seeing Ant and Dec and Cat all reunited!! SMTV Live was such a big part of my childhood â¤ï¸ WONKEY DONKEY! #SaturdayNightTakeaway

Shout out to fellow 90’s kids who are buzzing enjoying the SMTV Live references tonight. Ant, Dec, AND Cat once again ð #Saturdaynighttakeaway

Viewers were obsessed with the three of them being back together – even if it did make everyone feel old, knowing it’s been 20 years since the show aired.

They tweeted: ‘20 years since SMTV I am a FOSSIL’ and ‘Watching Cat with Ant & Dec again is like reliving my childhood! I used to love watching the trio together! Reminiscing fondly over here guys……. Sooooo excited for my kids to watch Wonkey Donkey with me tonight.’

Others added: ‘I am LOVING seeing Ant and Dec and Cat all reunited!! SMTV Live was such a big part of my childhood, WONKEY DONKEY! ‘ and ‘I can’t cope with seeing Cat back with @antanddec I’m literally so b***dy happy!!!’