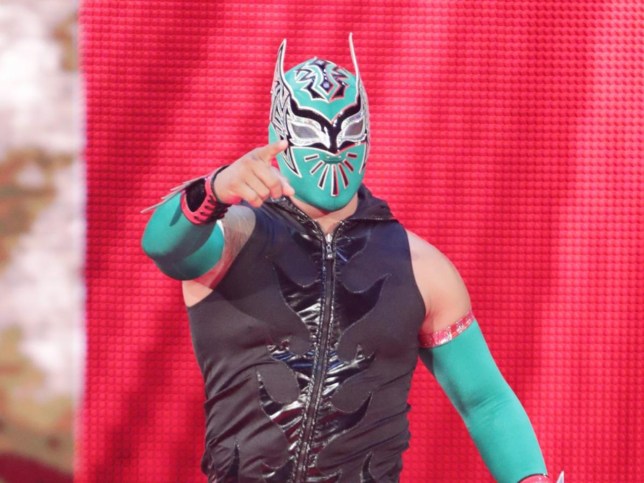 His son wants to follow in his father’s footsteps (Photo: WWE)

Former WWE superstar Sin Cara has revealed his 12-year-old son is already eyeing up a career in wrestling.

The talented luchador – now known as Cinta de Oro after taking over his late friend’s moniker and mask – first appeared for Vince McMahon’s company in 2011 before being granted his release early in 2020, and his time there sparked something in his offspring.

His son has also inspired him in turn, as their training sessions in the ring have been a saving grace during the pandemic.

He exclusively told Metro.co.uk: ‘I’ve been able to keep myself in a good place, because every time I’ve felt depressed or anxiety – because I was so used to always travelling and then everything stopped.

‘I kept myself in that place by training, training with my son – I have a 12-year-old son and my seven-year-old daughter.’

The 43-year-old star admitted it’s been ‘pretty cool’ to get in the ring with them and enjoy some quality time together, and he’s already seeing some passion from his son for the family business.

‘My son loves it, my son wants to be a wrestler,’ he smiled with obvious pride. ‘Ever since he was born – when I got signed by WWE, he was a year old, now he’s 12 years old.

‘He grew up watching me wrestle for WWE, he got to train with a lot of the guys, I used to take him with me to FCW or on the road sometimes to Raw or SmackDown.

‘He would always get in the ring and start doing flips, so it’s in his blood. I think, no matter what I think or even if I say no, he’s gonna do it because he loves it.’

For Cinta de Oro, the wrestling business has had its share of ups and downs, including a spell in anger management as the result of a few backstage scuffles – although he’s able to laugh them off now.

‘When I was there I was like, am I really here taking this class? I don’t think I have an anger management issue,’ he laughed.

Still, there are pitfalls and challenges any rising star has to deal with – which will be tough for him to see his own son go through.

‘Obviously it’s hard as a father to let go of your son and let him do his own thing, or let him struggle,’ he pondered. ‘But I think also, if you don’t let them struggle then they think everything’s gonna be easy. They don’t understand the value or things.

‘Like in my case, I had to slowly build myself up on the indies when I was working in Mexico, when I started working in the States – I’m a first generation wrestler.’ 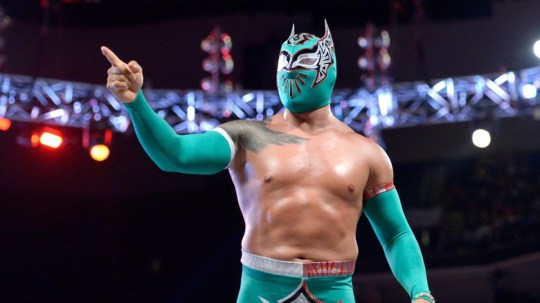 His son will have very different challenges, including being compared to his father – which has already happened in amateur wrestling.

‘For me, I’m trying to do the best that I can as a wrestler, as a father, to make it a little easier for him to go through,’ he paused.

‘If I can help him in that sense of not making the same mistakes that I made, not going through the same struggles, that’s something that’s going to be a blessing for him.’

Family is at the heart of Cinta de Oro and his life, which has been one benefit of the past year, despite meaning he left WWE and couldn’t make the most of his newfound freedom as a performer.

Faith has also played a big role, and he opened up on how he met with a friend – who is a pastor in San Antonio – to pray before making the decision to leave the company.

‘For me, it’s always been God in my life,’ he said. ‘We prayed before i released the statement because I wanted to make sure I was taking the right step for myself and my family, and the people that I love.

‘As a performer, being in WWE for 10 years, I had the security of an income every week. I knew when I asked for that, that was gonna stop.’

He couldn’t have seen the way the world was going to close up over the past year, but in the end that time at home made him realise he’d made the right decision.

‘During this whole year of the pandemic, I’ve been able to learn a lot about my kids – what they like, what they don’t like, what shoe size they are, being able to be a full time dad. Cooking for them, ironing their clothes, getting ready for school,’ he beamed, noting that he’s even getting good at styling his daughter’s hair in a ponytail.

‘I realise that I’d made the right decision for myself. I can only talk for me, what I wanted in my life.’

Despite a difficult 12 months since his release, the star is excited for the future, both in and out of the ring.

As well as writing two books – one kid’s story and another motivational piece drawing on his own experiences – he and his brothers are also opening their own solar panel company.

However, pulling on his mask and tights and getting back between the ropes is the next step, and he’s open to all possibilities when it comes to his journey from here.

‘If IMPACT comes and knocks on my door, AEW, New Japan, whoever – I’m open to talk.

‘Obviously I wanna continue wrestling, but I don’t wanna put myself in the same position of signing a contract and then being in the hands of other people,’ he admitted, noting that the independent scene is a viable option.

‘All I want is to be able to perform and wrestle and showcase the talent that God gave me. I don’t think I’ve really touched on what I can do in WWE, because I was never given that opportunity.’