SHAUN Ryder tried every drug going during his Happy Mondays pomp, but I bet none had an effect like his latest pills.

The Madchester icon is ­getting a welcome boost in the trouser department after needing testosterone replacement.

Shaun Ryder on C4’s Stand Up And DeliverCredit: Channel 4

Now appearing on Channel 4’s Stand Up And Deliver, learning comedy to raise money for cancer charities, he said: “I’m probably on more drugs today than in the Happy Mondays heyday.

“I’m on thyroxine, which is for my under-active thyroid. I’m on blood pressure pills. I’m on testosterone replacement.

“The thyroid affects everything — allergies and all sorts. I mean, if I don’t take these pills for the allergies, I can’t breathe. It’d be like an ­anaphylactic shock. Me throat goes tight and everything. I’m riddled with arthritis, too.

“But my wife is well satisfied with the testosterone treatment as all that went at the end of me 40s, so I’ve been on it for about 12 years now.

Former heroin addict Shaun, who took crack cocaine, ecstasy and marijuana before kicking drugs in his forties, admitted that he does not miss his party animal days.

The dad of six said: “You could say it’s a case of pills and bellyaches with not so much of the thrills any more. 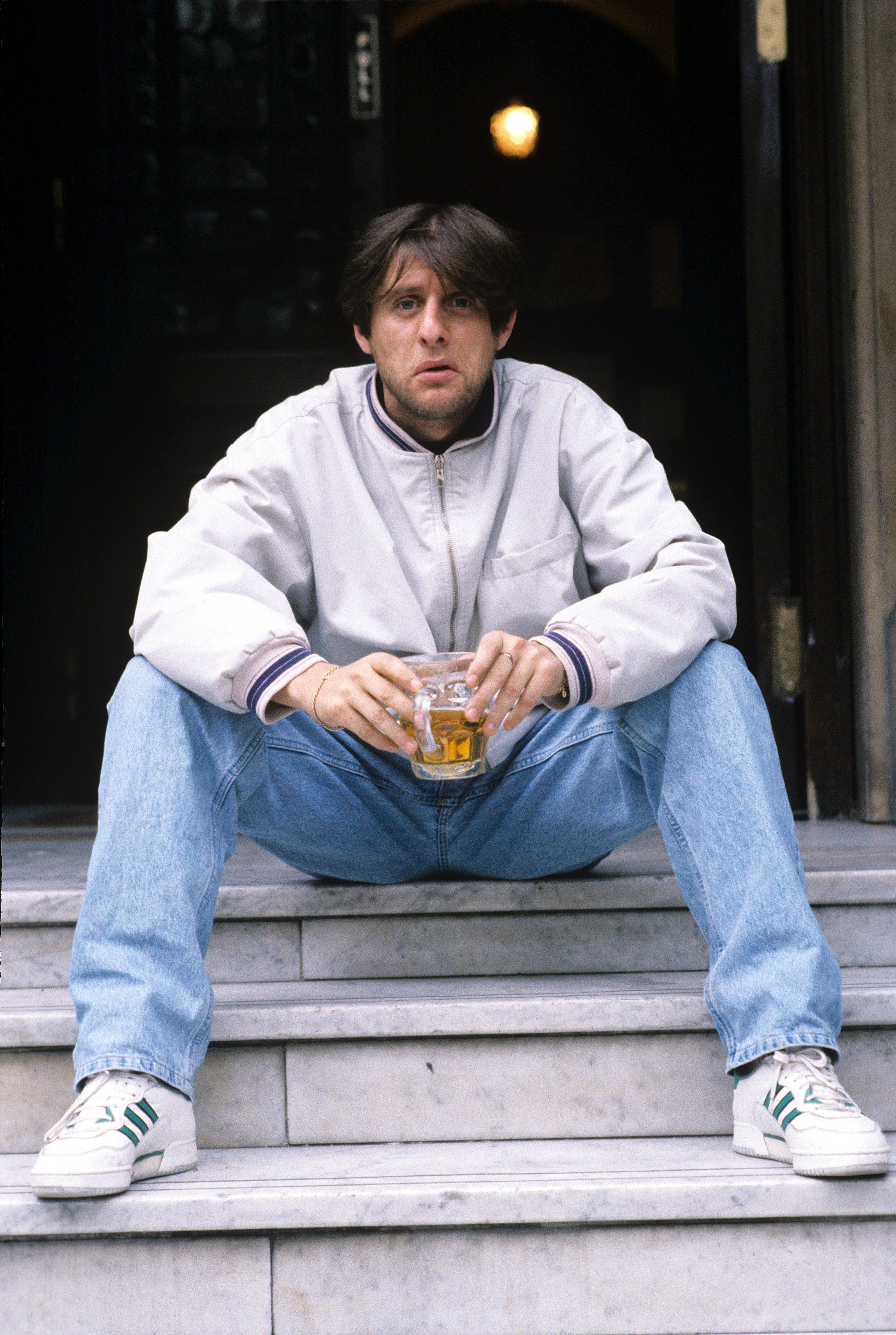 “But I’ve got the thrill of life. I know it sounds a bit monkey hippyish, but I just do get a buzz off having a good life with people round me.

“I don’t miss the drugs because I missed my children growing up. I mean, when I first had children, I was out — I never saw them. I was going around the world making a career, I was out and didn’t see them grow up. So, with the two youngest, it’s just about being Dad, and that’s what I do when I’m not working.”

Shaun also revealed he had been approached for another reality favourite.

He said: “There was talk about me doing Strictly.

“It would’ve been a bad move really. I can’t dance, no. And I just couldn’t stand there while some moronic t**t took the p**s out of me and I wasn’t allowed to say anything.

Shame, it would have been telly gold.

YOU have to hand it to Gregg Wallace – he’s not afraid of ­putting himself out there.

The MasterChef judge needs no convincing to get his kit off. 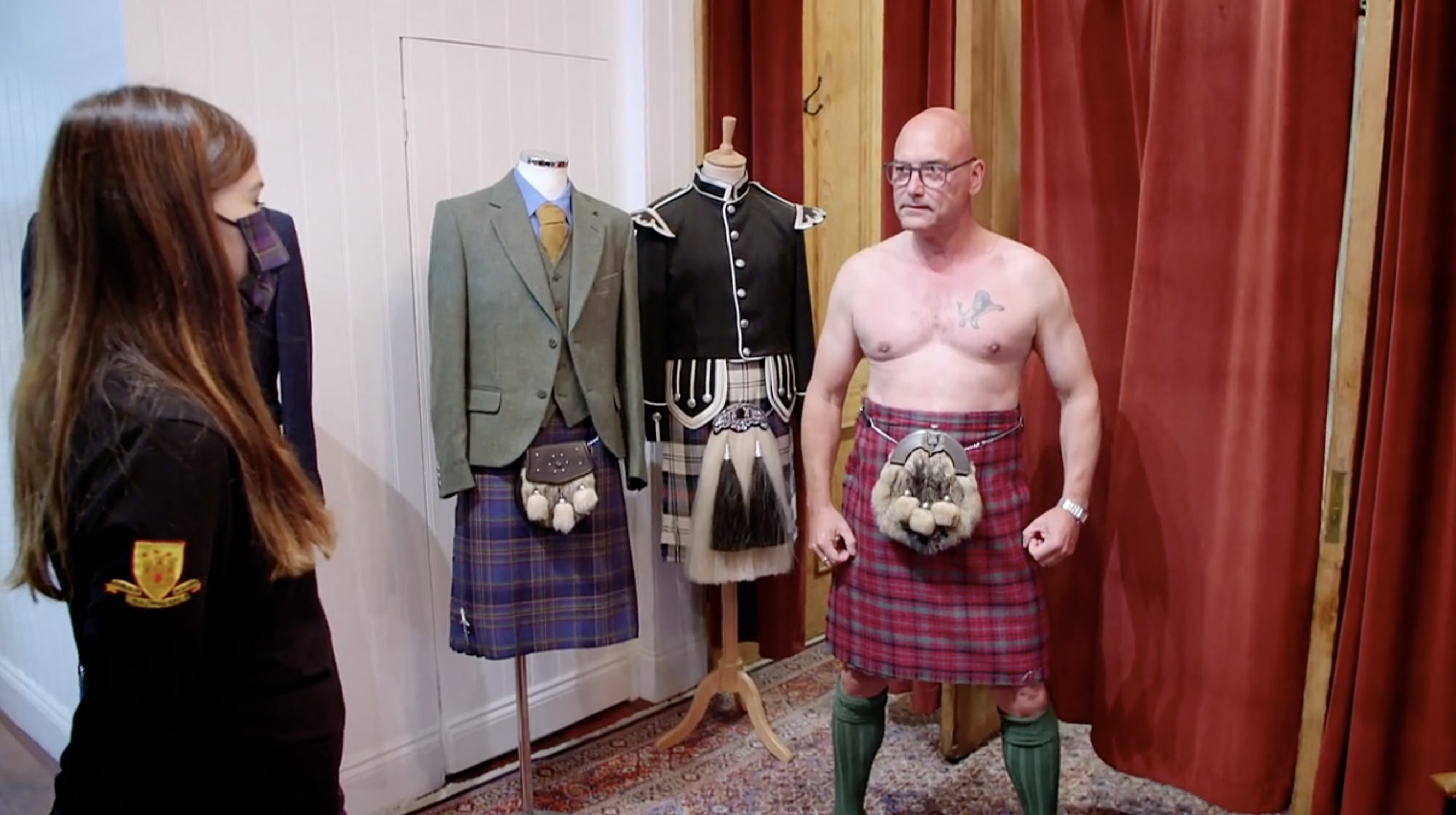 For the latest instalment of his Big Weekends Away – in Edinburgh, airing on Channel 5 tonight at 9pm – Gregg dons a tartan kilt and goes topless.

He discovers a personal link to Scotland and even finishes his trip with a refreshing dip in the North Sea. Brave man. 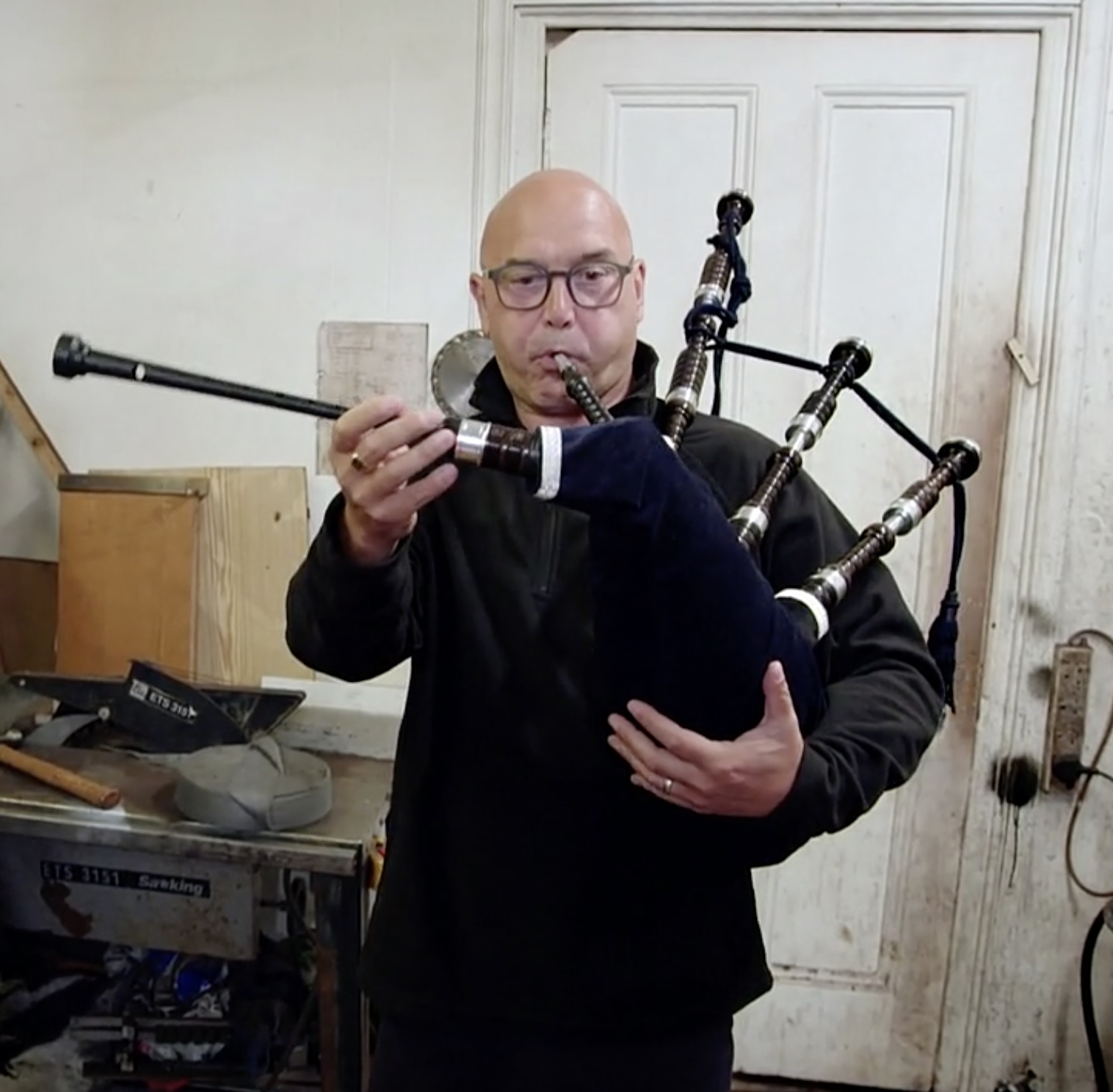 The TV chef having a go at the bagpipes

TOM Malone Jr has quit Gogglebox after nearly seven years. He was a leading figure in the Malone family from Manchester, who remain among the most ­popular sofa critics on the Channel 4 show. Tom thanked the producers but said: “New opportunities are knocking on the door.”

JAY Blades has told how he started out with nothing and survived years of racist abuse at school.

But the host of BBC1 ratings winner The Repair Shop says he does not feel any resentment. 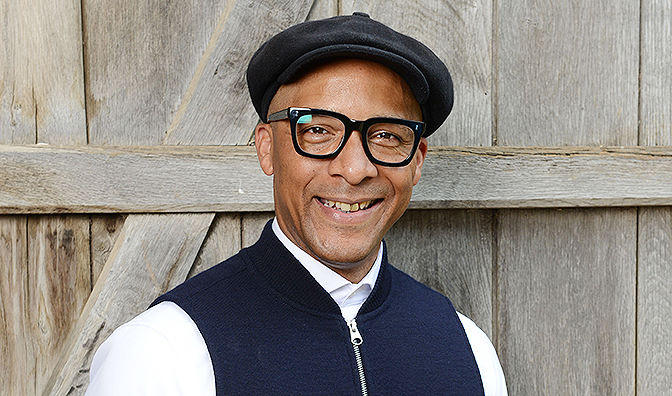 Jay Blades is the host of BBC show The Repair ShopCredit: TV Company

Speaking on Susannah Constantine’s My Wardrobe Malfunction podcast, Jay said: “Growing up poor and dealing with a lot of racism and ­dealing with a lot of ­rejection because of the ­colour of my skin has made me realise that people really and truly want to belong to a community.

“I spent four or five years at school just fighting racist people because I had a ­reputation.

“Anyone ­saying anything racist, I would have a fight with them.

“The punishment I received from my housemaster, assistant headmaster and headteacher was, well, they were still allowed to cane you.

“The housemaster would normally punish you with a slipper, it was those old plimsolls. He’d cut the fabric off so he’d just have the rubber sole.

“I don’t have resentment or any anger towards what had happened to me. It’s allowed me to be a really rounded person now.”

Good for you Jay.

VIEWERS of Behind Her Eyes have pointed out a few negative stereotypes regarding Scots in the new Netflix drama.

They are variously referred to as “bad-tempered” and “miserable”, while one character who happens to be a drug addict hails from . . . you’ve guessed it, north of the border.

WHEN Paul Hollywood became the only member of the BBC Bake Off team to make the jump to Channel 4 in 2017, the nation thought he was a heartless host simply following the dough.

But the master baker – who managed to quadruple his salary – said he cried his eyes out after learning there would be a new line-up alongside him, rather than Mary Berry, Mel Giedroyc and Sue Perkins. 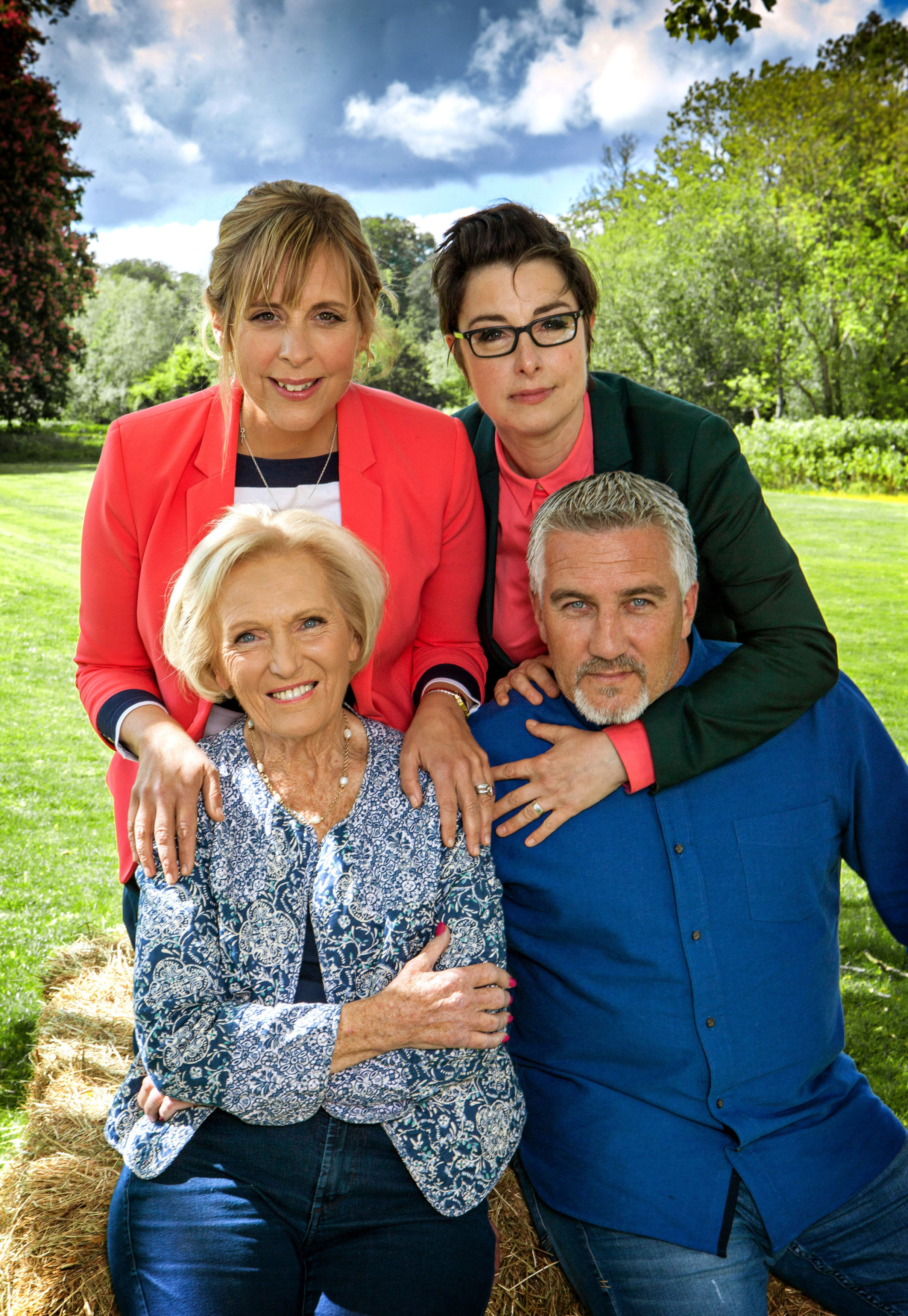 Paul Hollywood with Mary Berry, Mel Giedroyc and Sue Perkins on Bake Off

He said: “I remember crying. I remember when I realised I wasn’t going to work with Mel, Sue and Mary again I was really upset, really upset because I was so fond of all three of them.

“They are like sisters and Mary is like my mum, and to not be with them I was really nervous to be on my own – exposed and vilified the way I was. I wanted the programme to carry on because I thought it was a great programme.”

To be fair to Paul, he was only staying in his existing job, and the show – now with Prue Leith, Matt Lucas and Noel Fielding on the team – has been a roaring success ever since.

THE famous “duff duff duff” drumbeat at the end of ­EastEnders episodes has been used by rival soap stars to perfect their acting.

Former Corrie actress Catherine Tyldesley has revealed co-stars would ask someone to perform the sound so they would know how long to hold a lingering look as they deliver a cliffhanger.

Speaking to host Lee Salisbury on the second series of his Soap From The Box podcast, starting this Sunday, she said: “If we were in the last scene we’d always want a member of cast or crew to do the ‘duff duff’.”

BAD news for anyone hoping for more Inbetweeners – the cast members barely speak to one another, according to Blake Harrison.

The actor, who starred in the Channel 4 sitcom as dopey Neil opposite James Buckley, Simon Bird and Joe Thomas, said: “We’re nowhere near as close as what the public would want us to be.

“One of things I always found very funny is if someone on the street would stop me, they’d say, ‘Oh, where’s Jay?’. And I’d be like, ‘I don’t know, I haven’t spoken to him for six months’. ”