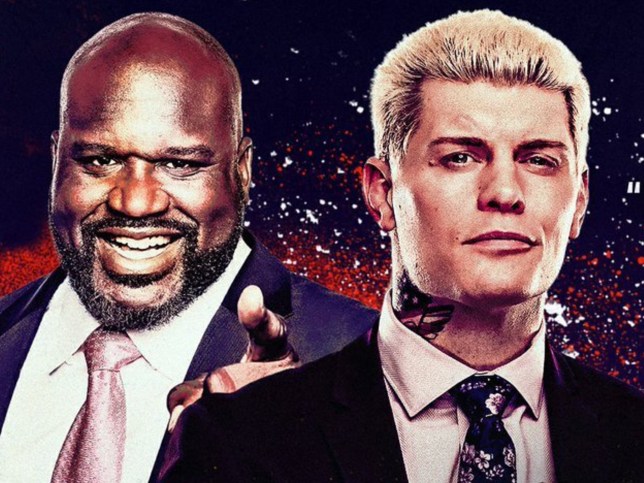 The NBA legend is poised for mixed tag action on All Elite Wrestling’s weekly show as he pairs up with Jade Cargill against Cody Rhodes and Red Velvet in a clash sure to appeal to more casual fans.

AEW certainly seems to be banking on that piqued interest, as the company has already confirmed the blockbuster bout will open this week’s episode.

They announced on Twitter: ‘TONIGHT on #AEWDynamite at THE CROSSROADS before Revolution we’re kicking off the show LIVE on TNT at 8/7c in a massive way as @CodyRhodes & @Thee_Red_Velvet partner to battle @NBA Hall of Famer @SHAQ & @Jade_Cargill!

‘Do not miss a minute of this historic clash at 8pm on TNT! (sic)’

The wrestling world will be keen to see what Shaq can do in the ring, as he’s only appeared for WWE a handful of times in the past, and in Battle Royals at that.

However, the towering star doesn’t seem fazed by the task in front of him.

‘Oh I’m winning. Guaranteed,’ he told Associated Press before the match. ‘I’m the type, I can never back down from a challenge.

‘I’m not a professional wrestler, but I’ve been in a match before. I’ve got a lot of moves in my arsenal. When you step inside somebody’s world, you have to stick to what you’re masterful at.

‘I’m not acrobatic. I’m not going to be jumping off the ropes. I’m coming with the power game. When I get hands on him, I’m going to display this power.’

Wrestling has a long history of active or retired athletes who have crossed over into the world of sports entertainment, from the likes of Dennis Rodman and Mike Tyson to Lawrence Taylor and Pat McAfee.

Shaq teased: ‘This one will top them all.’

McAfee – who delighted fans with his own in-ring debut against Adam Cole at WWE’s NXT TakeOver 30 event – isn’t so sure, but he also doesn’t put himself in the same bracket.

He tweeted: ‘I hope Shaq crushes tonight.. will be GREAT for the business that I have been a fan of for my entire life… I’ll be watching, excited to see the “match that will top all celebrity matches”