Sean Penn has undergone quite the transformation for his latest role (Picture: Starz Entertainment / Getty)

The trailer for new Watergate drama Gaslit, starring Julia Roberts and Sean Penn, has dropped, giving us all the quite the eyeful of a virtually unrecognisable Penn.

Transformed into President Richard Nixon’s Attorney General John Mitchell, the 61-year-old actor takes on the appearance of the balding, portly Mitchell, with the aid of prosthetics and make-up – as well his smoking pipe.

Julia Roberts is more glamorous in her role as Mitchell’s wife Martha, who was the first person to publicly accuse Nixon for the Watergate break-in, appearing in the teaser dressed in a variety of stylish early 70s fashions and immaculately coiffured haristyles.

The trailer for the Starz drama, based on the first season of the podcast Slow Burn, promises some top-level political conflict, as Martha is branded ‘crazy’ within the first few seconds and defends herself with the line: ‘I’m a Southern woman. We speak our minds, we talk. I never stop talking.’

After the interviewer says, ‘I bet your husband loves that,’ she quips: ‘He takes it in stride.’

Roberts is also seen struggling while two men try to inject her with an unknown substance, and another tells her that ‘a lot of women your age suffer from paranoid episodes’. 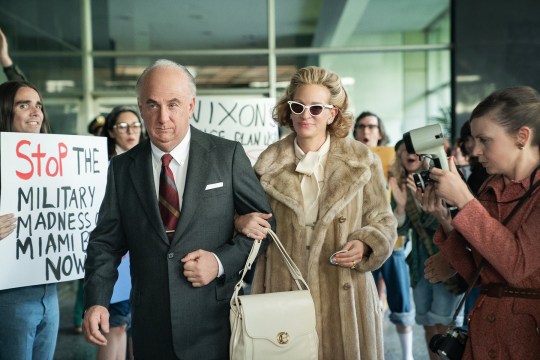 Penn and Roberts as the Mitchells (Picture: Hilary Bronwyn Gayle/Starz) 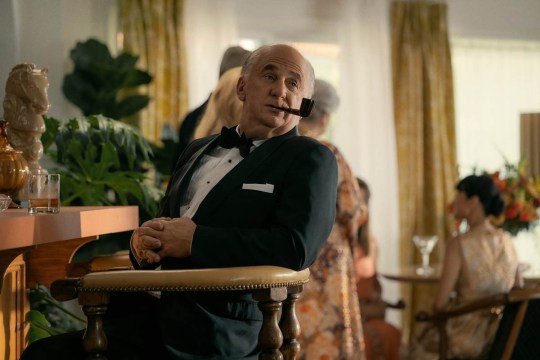 Would you know this was Sean Penn? (Picture: Starz)

The clips also suggests the intrigue surrounding the scandal as there are slaps, smashed tables, scrambles for the telephone and Penn as Mitchell telling his wife ‘nobody gives a damn what you think.’

Mitchell was Nixon’s loyal friend and advisor, and ultimately found guilty of conspiracy, obstruction of justice and perjury for his involvement with the scandal.

Describing Martha, show creator and executive producer Robbie Pickering told Deadline: ‘She was a total conservative cheerleader. I’ve always been fascinated by conservative women like that. You want to root for them because a woman in this movement is kind of punk rock, but also punk rock for horrible things. 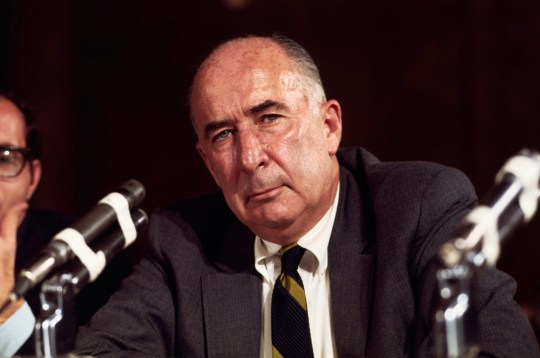 ‘In the writers’ room we really weren’t interested in a Wikipedia run down of the events as much as we were hyper interested in the truth of the characters. That you can’t get from the history books, that’s a special province of television.’

Gaslit was the project which hit headlines when Penn refused to return to the set until the full cast and crew were vaccinated against Covid-19, rather than just those who personally interact with the performers. 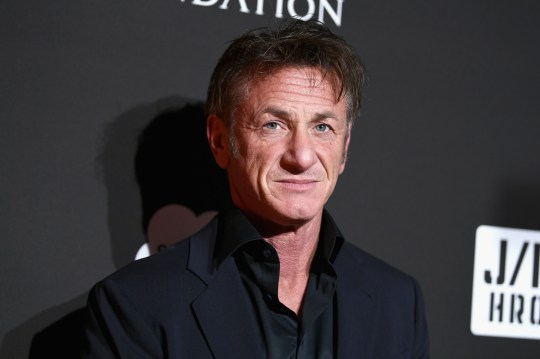 Penn has hit headlines recently with his comments (Picture: Getty)

Speaking to Michael Smerconish on CNN in August he explained: ‘I do believe that everyone should get vaccinated. I believe it should be mandatory, like turning your headlights on in a car at night.’

He’s also been busy sharing other opinions lately after claiming that men have become ‘feminised’ and that it takes ‘cowardly genes’ to swap jeans for a skirt.

This attracted the ire of Westworld star Thandiwe Newton, who branded the actor a ‘jibbering fool’ for his comments.

She wrote on Twitter: ‘Dude what are you SAY-ING?? Like for REAL? You’re a jibbering FOOL. MF you used to be sexy but now you’re just tragic.’

Gaslit is set to premiere on Starz in the US on April 24.