The cast of Schitt’s Creek were set to reunite for a farewell tour (Picture: Manny Carabel/Getty Images)

Dan and Eugene Levy have confirmed the string of dates for the upcoming Schitt’s Creek tour have been axed.

The award-winning comedy came to an end last year, much to the sadness of fans.

Some lucky viewers were awaiting a reunion in the coming months after a north American tour was announced.

Despite this being postponed due to Covid, the Levy father-and-son duo told those who were due to attend that the events would no longer be going ahead as planned.

Dan, 38 and Eugene, 74 released a joint statement via their Twitter accounts to break the news on Friday.

They said: ‘To our incredible Schitt’s Creek fans, when we postponed the Schitt’s Creek: The Farewell tour, we had every hope and intention of traveling to see you later this year.

‘However, despite our best efforts to reschedule while keeping your health and safety at the forefront, we’ve found that state and local mandates vary too widely to do so in the near future. 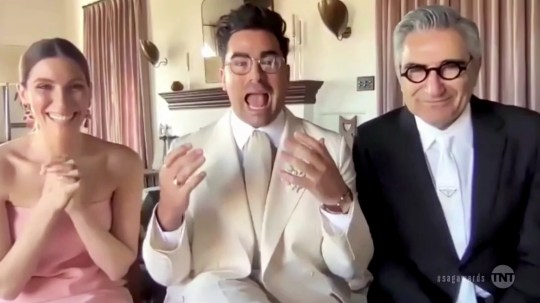 The show won Outstanding Performance by an Ensemble in a Comedy Series in 2021 (Picture: Getty Images North America)

‘So, we have made the difficult decision to cancel all tour dates that were scheduled pre-pandemic.’

They went on to reassure fans all tickets would be refunded.

It comes amid a rise in Covid cases across the US, where varying rules currently exist with the virus.

Luckily, it seems it probably won’t be the last time the cast will get together, as they hinted at more to come.

‘We’re so sorry to be missing you, and we will continue to try to find a way to see you in the future,’ the pair added.

Speaking to ComicBook.com, she said: ‘They’re still there. There’s definitely… We are going to work together again.

‘There’s definitely never gonna be another show, we’re never gonna do this show again, but I’m sure, and I’m not saying, “For sure this is happening,” I’m sure because I know and love these people that we’re gonna do something like that, get together and do some movie or something.’

The Canadian series ran for six seasons between 2015-2020 and received a host of recognition at the Emmy Awards last year as it picked up awards across the board in the comedy categories.

The farewell tour was set to include all the show’s favourite names, including the Levys as well as their co-stars Catherine O’Hara, Annie Murphy, Emily Hampshire and Noah Reid.

However, the US was averaging 143,827 cases a day according to official figures released on Thursday.

Schitt’s Creek is available to stream on Netflix UK.