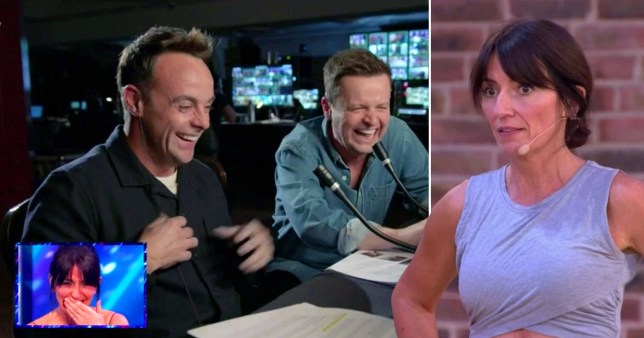 Ant and Dec’s Saturday Night Takeaway viewers were left reeling while watching Davina McCall’s new hidden ear segment on the show, with several saying it had given them the ‘best laugh in ages’.

In a new instalment of I’m A Celebrity… Get Out Of Me Ear, Ant McPartlin and Declan Donnelly called on Davina to mess with three groups of regular gym-goers under the pretence that she was launching a fitness app.

The foolery began right from the very start, when Davina was told by Ant and Dec through her hidden earpiece to greet one of the groups by singing ‘Don’t Cry For Me I’m Davina’ in homage to the classic song from Evita, leaving them looking utterly bemused.

While discussing her new fitness venture, Davina stated (of course, while in character) that she thought fellow fitness role model Joe Wicks was a ‘big fat fake’, with Ant and Dec cracking up behind the scenes as they watched her every move.

At one point, Davina recited lines from an autocue while her participants were exercising behind her, describing them as ‘bang average people’.

And yet she persevered with the Get Out Of Me Ear challenge, following Ant and Dec’s order to have her exercise buddies do a ‘silly sausage’ yoga position – which was effectively lying face down on a mat and wiggling on the ground to imitate a sausage being fried. 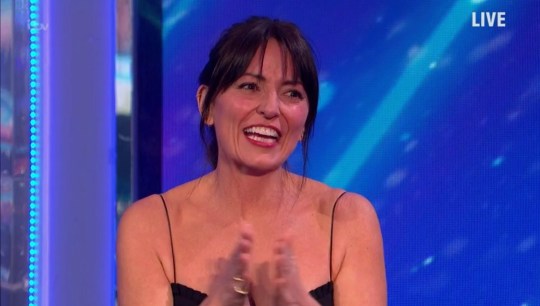 They then turned over on their backs, when they did another unusual move called the ‘trout’.

After firing the participants with a ‘sweat gun’ to make them appear more sweaty, Davina then had them do kettlebell swings – but with literal kettles attached to bells.

Just as it seemed like it couldn’t reach a higher level of absurdity, Ant and Dec finally emerged, revealing to the groups that they were actually appearing on Saturday Night Takeaway.

Several Saturday Night Takeaway viewers expressed how hilarious they found the whole turn of events, with one person saying it’s the ‘best laugh I have had in months’.

‘Thank you for the best laugh in ages Davina was brilliant,’ one viewer tweeted.

‘That’s one of the best Get Of Me Ear’s they’ve done in a while…. HILARIOUS!!!’ another person said.

Another remarked: ‘Davina stuffing her face with marshmallows while cheering on people doing her workouts I am HOWLING.’

Earlier on in the show, Strictly Come Dancing 2020 winner Bill Bailey delighted Hot Fuzz fans when he recited a famous line said by his character in the 2007 film.

‘You can never go wrong with a Hot Fuzz reference!’ one person commented in response.

Ant and Dec’s Saturday Night Takeaway returns next Saturday at 7pm on ITV.