Saturday Night Takeaway viewers were left confused after Ant McPartlin apologised for airing a ‘rude word’ on the show.

As the show returned after an ad break, Ant began by apologising ‘if anyone saw a rude word’ in the previous part, with Declan Donnelly adding: ‘We’re live tonight!’

The problem? Nobody noticed.

And the result was, of course, everyone clamouring to find out what rude word they had missed.

Viewers took to Twitter in their droves, releasing their inner Sherlock Holmes as they searched for the mishap, but nobody had an answer.

‘Where was the rude word?’ one person asked, while another joked: ‘Now I’m wondering what rude words I missed’.

‘Me too, came here to see [if] there was any enlightenment!’ one person replied.

One viewer shared an image of Shrek looking confused, and joked: ‘Me trying to work out what the rude word was’, while another appeared tragically disappointed they had missed out.

Me too, came here to see I there was any enlightenment!

Some suggested the word in question was from the very beginning of the show, when audience member Laura was reunited with her daughter who she hadn’t seen in two years.

As her daughter removed her Masked Singer mask, and introduced the woman’s two grandchildren – one of whom Laura had never met – she let out a fairly audible ‘S***!’.

Which, considering the shock she had just got, was a fairly normal reaction.

But Ant had apologised for that classic live TV mishap at the time, almost an hour before the second apology, so that couldn’t have been it. 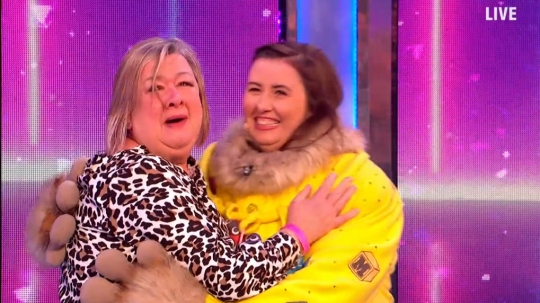 Some viewers thought mum Laura, who was reunited with her daughter on the show, could have been behind the apology (Picture: ITV)

Some internet sleuths even rewinded their TVs to try and catch the word (because we’re all such nosey people), and they still weren’t able to find it.

And others became convinced that Ant and Dec were pranking the audience – we certainly wouldn’t put it past them.

Perhaps all will be revealed on next week’s show – we’ll just have to wait and see.