Ant McPartlin and Declan Donnelly have shared an insight into the new segments that will be featured when Saturday Night Takeaway comes back our screens this weekend.

Earlier this month, it was confirmed that Ant and Dec’s Saturday Night Takeaway would be making its highly-anticipated return on Saturday February 20.

With just one day to go, Ant and Dec appeared on today’s This Morning with Eamonn Holmes and Ruth Langsford to chat about how the show is going to work without its typical studio audience.

The presenting duo also clued Eamonn and Ruth in on a few new segments, including one called Double Trouble. Consider us intrigued.

In new drama Double Trouble, viewers will be introduced to clones of Ant and Dec, Dec explained as he built the suspense.

‘In a terrible, hilarious accident we’ve been cloned. But our clones have turned evil, of course,’ he said. 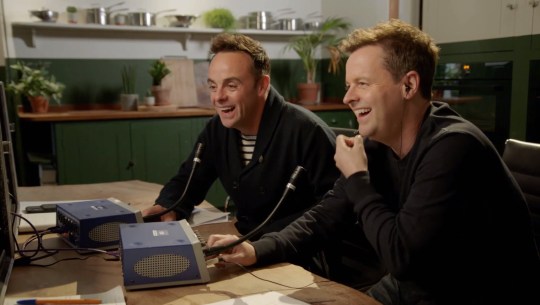 Ant and Dec are back to cause mischief this Saturday (Picture: ITV)

In another part of the programme, viewers will have the chance to win a prize if they spot a special rainbow in the sky.

‘We’ve got a new item called the Takeaway Rainbow where we light up a rainbow and if you see it across Britain tomorrow night you could be in for a prize. So that’s brand new,’ Ant outlined.

In keeping with Covid-safe regulations, there will not be an audience in the Saturday Night Takeaway studio, which is typically a massive part of the show. 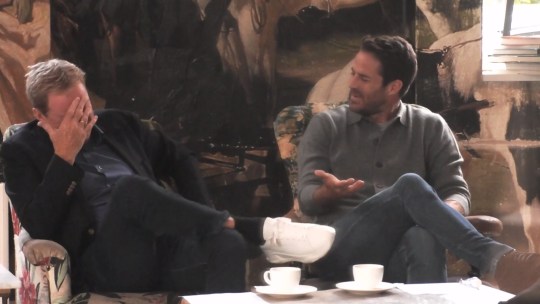 Harry and Jamie try to keep it together during I’m A Celebrity… Get Out Of Me Ear (Picture: ITV)

Instead, the virtual audience will be shown on a large screen, in a similar fashion to The Voice UK.

During their This Morning interview, Ant and Dec showed how the audience is going to work, with members of the production team appearing on the screen behind a massive red curtain.

In a sneak peek of the new series released ahead of tomorrow’s launch, Ant and Dec get father and son Harry and Jamie Redknapp involved in a prank that leaves them in stitches.

For a game of I’m A Celebrity… Get Out Of Me Ear – where Ant and Dec order celebrities to carry out tasks while they wear hidden earpieces – the pair carry out a prank on an unsuspecting transport manager with the help of former footballers Harry and Jamie.

This Morning airs weekdays at 10am on ITV while Ant and Dec’s Saturday Night Takeaway returns on Saturday at 7pm on ITV.