RYLAN Clark has played down a video of him appearing to ask for “gear” on a boozy night out in a cheeky tweet this morning.

The Strictly It Takes Two host took to Twitter to write: “Morning. Slow news day. Have a good Sunday [thumbs up emoji]”

He was supported by fans and celebrity pals like Pointless’s Richard Osman who commented: “Rylan, I’ve said it before and I’ll say it again, you’re a lovely, kind guy, and a brilliant presenter. Someone is being judged today, and it’s not you.

Actress Amanda Abbington told him: “You are wonderful and absolutely loved. ABSOLUTELY LOVED.”

Rylan also shared silly selfies with pal Emily Atack from the previous night in which he joked “lockdown hasn’t been kind to The Corrs”.

The much-loved star recently opened up about being hospitalised after becoming dangerously thin and struggling with his mental health following his split from from husband Dan Neal, 42.

He also admitted he was drinking more and that he had “gone out a few times and drunk more than I usually would”.

In a video, shared by The Sunday Mirror, the popular 33-year-old appears to say: “Give me the gear, give me the f***ing gear and we’ll go.”

Gear is sometimes used as a slang word to refer to drugs, specifically cocaine, but Rylan’s use of the word is not clear in the video.

There is no suggestion that Rylan asked for or took drugs.

Upon realising he is being filmed, a grinning Rylan – who looks slightly worse for wear – jokingly threatens: “No, no, no. Delete that now or I’ll f***ing kill you.”

TV favourite Rylan then laughs with the cameraman who jibes back: “Anyway. You just said give me the gear. I’m not gonna.”

The footage is thought to have been filmed by a fellow reveller outside a bar in London’s West End.

A witness said the Strictly: It Takes Two host was “pretty animated” and that he “wanted to party”.

The witness, who spotted the star, estimated to be worth around £4.5 million in the bar’s smoking area, claims Rylan told him he wanted to have a “wild night out”.

The fellow partygoer also claims the 33-year-old was keen to ditch his team.

The star, who is seen in the 22-second clip wearing a smart black shirt and trousers and clutching his phone, has previously insisted that he has never felt the need to do drugs.

As the video emerged, Rylan was seen leaving posh Claridge’s Hotel in Mayfair.

He was pictured showing off his signature pearly whites, dressed in dark jeans, a black shirt and jacket.

The video comes after troubled Rylan opened up about his turmoil following his split from his ex, Dan, last summer.

The Essex-born reality star’s weight plummeted following the breakup, and he took a four-month break from showbiz.

Reflecting on his breakdown, which saw him hospitalised “for safety reasons, he told  The Observer: “I was having thoughts and doing things that made me… f**ked up, for want of a better word.”

And he admitted to drinking more – although insisted that he was not an alcoholic.

Rylan is currently going through a divorce from the former policeman, who he was with for six years.

The pair met on Big Brother where Dan was a contestant and Rylan a presenter. 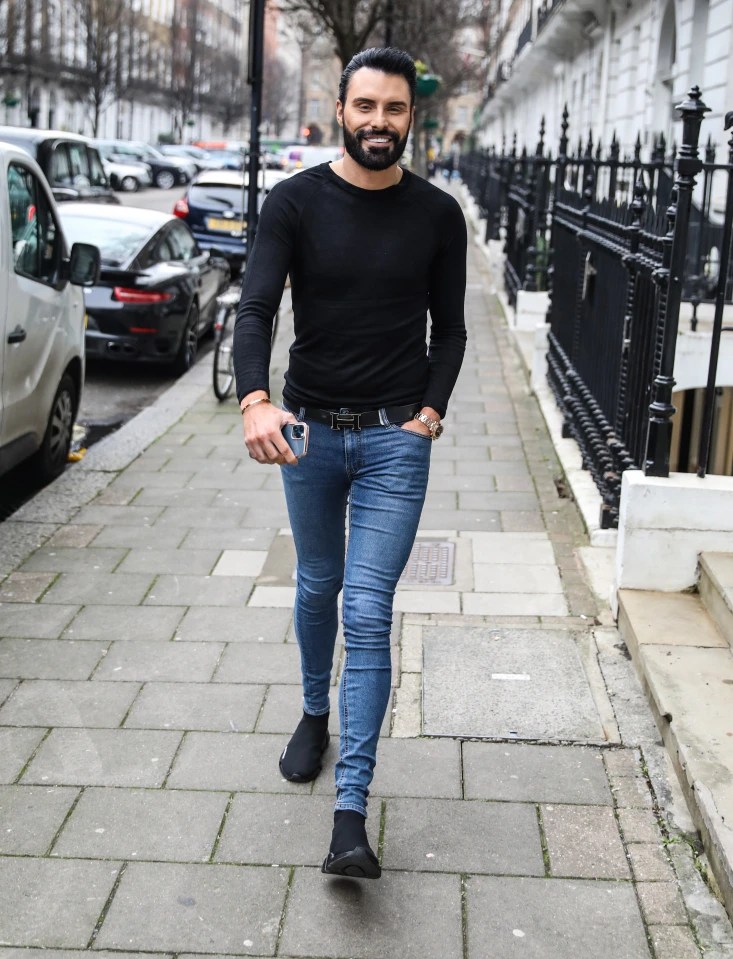