Ryan and Rob were ready to fire back at the Ted Lasso joke (Picture: Apple TV/Rex)

Ryan Reynolds and Rob McElhenney have shared a joke ‘cease and desist’ to TV series Ted Lasso after the comedy made fun of their ownership of football club Wrexham.

Deadpool star Ryan and Mythic Quest creator Rob completed their takeover of Wrexham in February, when they invested an immediate £2million in the National League club.

Ahead of the club’s first game of the season on Saturday, their first since they became owners, the men both posted letters to social media on headed paper reading: ‘From the desk of RR McReynolds.’

The letter to Apple TV Plus, which airs Ted Lasso and Rob’s series Mythic Quest, reads: ‘It has come to our attention that in a recent episode of Ted Lasso, our very real ownership of Wrexham AFC was called into question by an otherwise beloved character named ‘Higgins’.

‘While we hold the incomparable Jeremy Swift in no ill regard and are honoured to be mentioned on the platform that’s brought us high-quality programming ranging from Mythic Quest season one to Mythic Quest season two, we must insist that you cease and desist from the casting of any doubt regarding our commitment to the club, the fans and the entire Wrexham community.’

The men said that to avoid legal action, the company should send two large boxes of Lasso’s trademark biscuits to the Wrexham stadium ahead of the match, which was an away game against Solihull Moors with a 3pm kick-off.

Jeremy Swift as Higgins (L) made the comment (Picture: Apple TV Plus)

It’s unknown whether Apple TV Plus managed to make this tight turnaround with any biscuits or not, but Wrexham managed a 2-2 draw against their opposition after a late goal from Solihull Moors saw them equalise.

Ahead of the clash Rob also tapped up some of his It’s Always Sunny In Philadelphia co-stars, including Danny DeVito, for half-hearted messages in support of Wrexham. 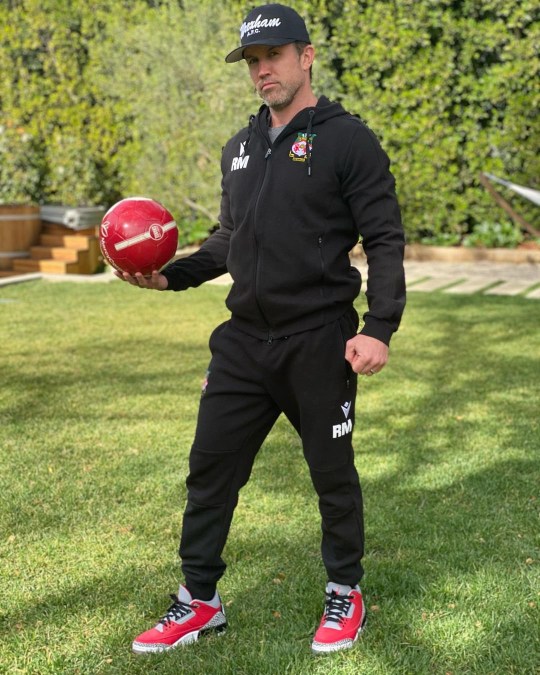 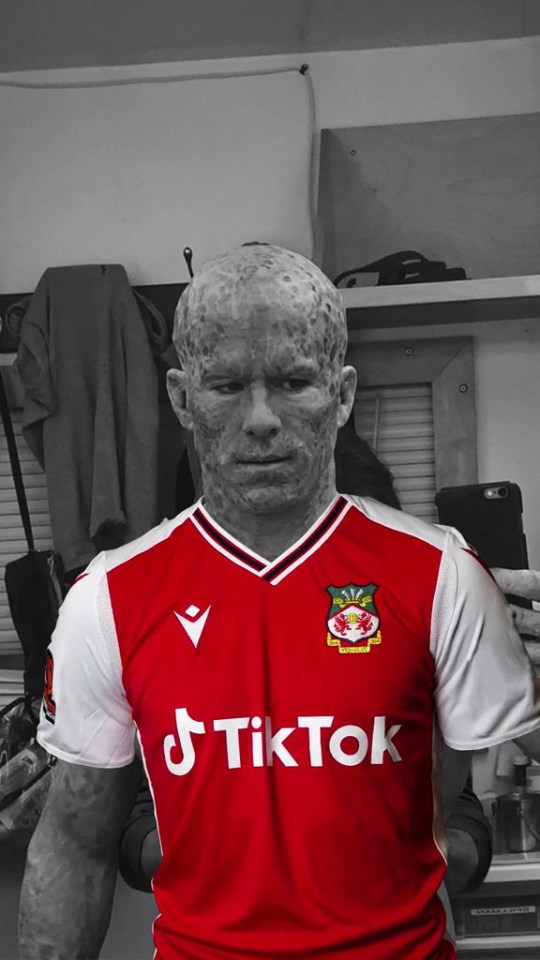 Ryan is known for having fun on social media while he promotes Wrexham (Picture: Ryan Reynolds/TikTok)

Danny, who plays Frank Reynolds in the comedy, says to the camera: ‘Are we doing it now? Right now? Go Wrexham.’

Glenn Howerton, who plays Dennis Reynolds, asks: ‘Why are you making me do this?’ before the camera swings to Kaitlin Olson (Dee Reynolds), whose voiced is obscured, and Charlie Day (Charlie Kelly), who asks: ‘What am I getting paid?’

Rob then swings the camera round to himself and says, with plenty more enthusiasm: ‘Up the town, let’s go Wrexham!’

He captioned the TikTok video: ‘So much love and support.’

Both Ryan and Rob have previously shared jokey content about Wrexham on TikTok after the duo joined the platform as it was unveiled as a sponsor for the Welsh team, which competes in the fifth tier of the English football league system.

Wrexham is also is the third oldest professional football team in the world, having been founded in 1864.

As well as both joining in with a fake advert for horse trailers on the Wrexham AFC account, which turned out to be the TikTok sponsorship announcement, Ryan made use of the Wrexham team shirt filter on the platform and also trolled Rob’s first TikTok, where he pretended to be looking for a duet partner, with Ryan shutting him down with shushing and telling him to ‘just rest’.

What is a Blue Moon and when is the next one? – The Sun