A RuPaul’s Drag Race UK mystery has been solved after fans scrambled to find out what A’Whora said in her X-rated stand-up comedy routine.

The queen went far, far down the vulgar route for her performance, with judges RuPaul Charles, Michelle Visage and Alan Carr in shock at the crude jokes.

At one point, a full phrase was censored from the show, with viewers mystified.

‘The best advice I ever received growing up was from my nan,’ A’Whora – real name George Boyle – said.

‘You know, people always say, there’s such a huge age gap between the older and the younger generation.

‘And [that’s] right, but me and my nan found that that gap was what really brought us together. It was a real deep wholesome connection. We both had [censored].’

It was later revealed, in an uncensored clip posted by World Of Wonder, that A’Whora said: ‘We both have gaping a***holes.’

What did AâWhora say though? If they left some of that in, what did they beep out? ðð

With the judges giggling on the panel, Alan was seen hiding his face in his hands.

The Chatty Man star later suggested that the performance was a little too filthy, joking that A’Whora wouldn’t land a spot at the Royal Variety Show.

‘I don’t think it always needs to be in the gutter,’ Michelle added. 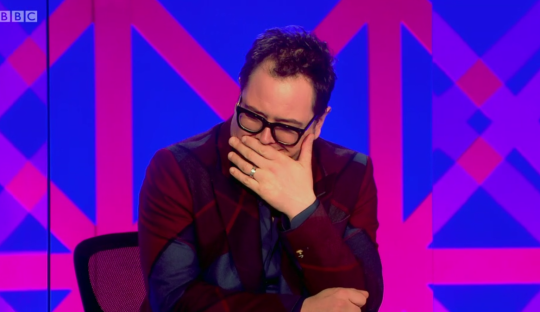 The judges were shocked (Picture: BBC)

Fans were desperate to know what she said, with one writing: ‘Not knowing what filth A’whora said in the standup set is Drag Race’s equivalent of the Gavin & Stacey fishing trip.’

‘No but what was Awhora’s joke??????’ another asked, while one more said: ‘What did A’Whora say though? If they left some of that in, what did they beep out?’

Elsewhere on the show, A’Whora has stunned, with her runway looks being a particular win on multiple occasions.

She also recently gave fans a glimpse behind the scenes as she shared her Snatch Game audition tape, where she impersonated Katie Price.

The queen later decided to drop her impersonation, giving us her best Louis Spence instead, with her fellow queen Bimini Bon Boulash taking on the Pricey.

Four queens are now left in the competition, with them battling it out to become the series two champion.