Dawn French stole everyone’s hearts during her guest appearance on RuPaul’s Drag Race, but the Vicar of Dibley star also got into the shady spirit of the show.

Getting to know the guest judge, RuPaul asked her: ‘At what point did you find your right rhythm as a comic?’ with Dawn simply responding: ‘Let’s face it, I do know people who have been in comedy for 40 years and still can’t do stand-up [cough] Jennifer Saunders!

‘But y’know, it’s easier for some than others.’

Dawn and Jennifer have been friends since 1977, becoming one of the most well-known double acts in British comedy history – so they’ve definitely earned the right to throw a little shade here and there.

Fans were thrilled to see Dawn appearing on the show in the guest judge spot which has so far seen stars including Gemma Collins, Maya Jama, and Jessie Ware giving their opinions on this series’ talented queens.

In fact, some called for her to be a permanent member of the panel – and we’re definitely not arguing. 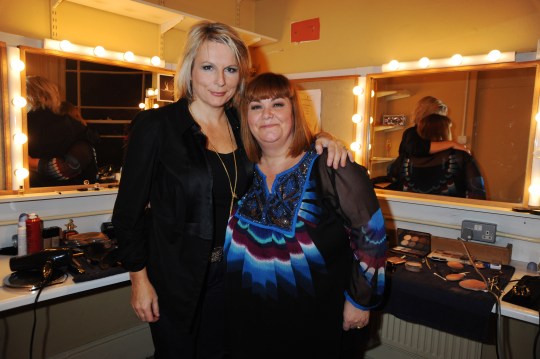 Dawn and Jennifer are one of the best known duos in British comedy (Picture: Getty Images)

‘Dawn French throwing @ferrifrump’s stand up under the bus is the most iconic comedy moment of the last decade,’ one fan wrote.

‘It’s fab seeing @Dawn_French on the panel – she makes me smile so much!’ another added, with one more writing: ‘Dawn French is the best guest judge Drag Race has ever had I love her sm.’

However, Dawn wasn’t the only one getting a little shady on this week’s episode, with A’Whora and Lawrence Chaney left fuming after their fellow queen Ellie Diamond decided their order in the stand-up comedy challenge.

Safe to say, they weren’t too happy and they made it clear.

Only four queens are now left in the competition, with them set to battle it out to become the series two winner. We can’t wait!