A psychic pig has ‘predicted’ what the weather is going to be like this spring by using some apples.

Mystic Marcus and his owner Juliet appeared via video link on Tuesday’s This Morning to show the hog’s latest predictions.

It’s not Marcus’ first time on the programme as during his previous appearances he also reportedly predicted Brexit and in 2019 he foresaw whether England was going to win against Tunisia in the World Cup.

In light of Groundhog Day, Marcus made a return to the ITV programme to share his predictions on whether it’s going to be sunny this spring.

Explaining how he was going to predict the weather, Juliet began: ‘In one corner we’ve got some beautiful red apples with a nice red sun. 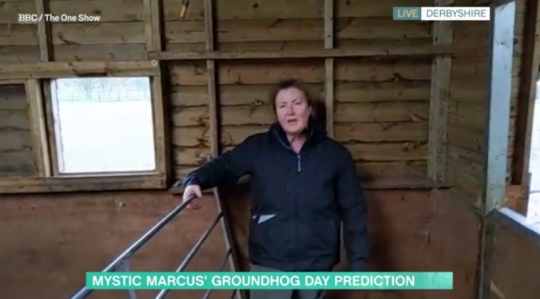 ‘In another corner, we’ve got some equally lovely red apples with a horrid snowflake that we don’t want him to go to.

‘So, at the moment I’m retaining him here because he’s quite keen to do this jargon and to get his predictions done.’

‘So I’m holding him back with this metal hurdle and I’m going to whizz this out of the way and we’ll see which one he goes to,’ she continued.

‘We don’t want any bad news here,’ Phillip Schofield chipped in. ‘We can’t take any more.’ 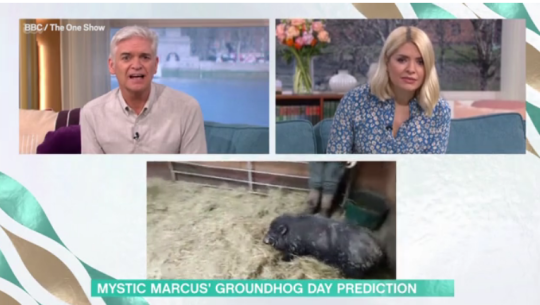 Where is Marcus going to go? (Picture: ITV)

Marcus seemed a little hesitant at first as he wasn’t sure which way he wanted to go.

Holly Willoughby said: ‘Oh, he’s taking a steady approach. I’m not sure he’s even sure. 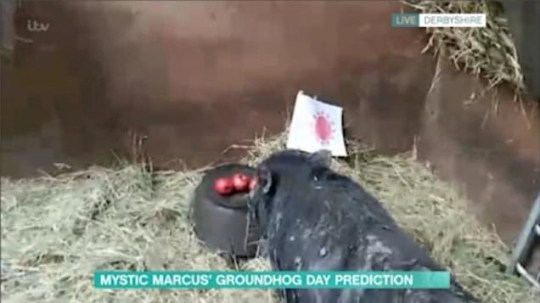 Looks like it’s going to be sunny in spring (Picture: ITV)

‘Marcus want an apple?’ she added.

‘Any summer at all, Marcus?’ Phillip quipped. ‘Anything happening?

After a little bit of encouragement from his owner, Marcus eventually made his way towards the pile of apples with the nice red sun.

Viewers couldn’t help but comment on Marcus’ predictions as one tweeted: ‘He won me money last time! Come on the Marcus!’

Another commented: ‘Applauding a pig that has picked an apple FFS.’

While one quizzed: ‘A psychic pig?’