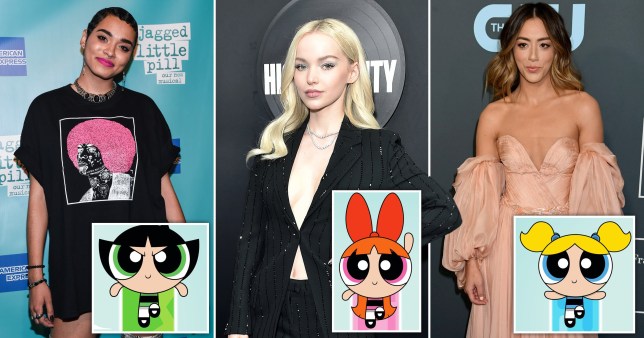 Actresses Dove Cameron, Chloe Bennet, and Yana Perrault are set to bring the The Powerpuff Girls to life in the upcoming live-action reboot.

The beloved cartoon series is getting a gritty update on The CW and now the star’s taking on the roles have been confirmed.

Liv and Maddie star Dove, will play Bubbles Utonium whose ‘sweet-girl disposition won America’s hearts as a child. She still sparkles as an adult, but her charming exterior belies an unexpected toughness and wit.

‘She’s initially more interested in recapturing her fame than saving the world, but she just might surprise us and herself.’

Agents of S.H.I.E.L.D actress Chloe Bennet will portray Blossom Utonium as its stated, ‘Though she was a spunky, conscientious, little-miss-perfect child who holds several advanced degrees, Blossom’s repressed kiddie-superhero trauma has left her feeling anxious and reclusive, and she aims to become a leader again — this time on her own terms.’

Broadways’s Jagged Little Pill star Yana Peerault will play Buttercup Utonium, ‘who was the rebellious badass of The Powerpuff Girls in its heyday.

‘More sensitive than her tough exterior suggests, Buttercup has spent her adulthood trying to shed her Powerpuff Girl identity and live an anonymous life.’

In summary, Juno creator Diablo Cody’s series will see us catch up with the trio in their twenties as they adjust to life as adults after being forced to be childhood heroes by their dad.

The series is being executive produced by Greg Berlanti, who has been the EP for smash shit show such as Netflix’s Chilling Adventures of Sabrina, You, Kaley Cuoco’s series The Flight Attendant, and Dawson’s Creek.

It will certainly be interesting to see the girls unhappy that they lost their childhood by being trained to become crime-fighters, rather than just being kids.

Time will tell what the dark twist on the iconic cartoon will have in store.

A release date is yet to be confirmed.

Black traveler ‘suffered racism after airport made her show breasts’