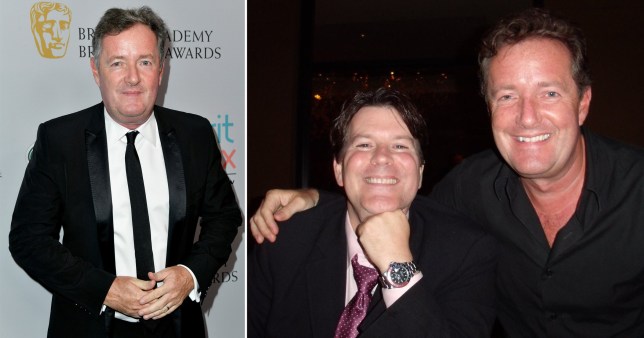 Piers spoke out after quitting GMB only to pay tribute to his late manager (Picture: Getty/Twitter)

Piers Morgan has broken his silence after his Good Morning Britain exit to pay tribute to his manager – who told him to ‘trust his gut’.

The TV presenter spectacularly quit the ITV morning show after more than 41,000 people complained about his comments about Meghan Markle to Ofcom on Monday’s episode.

On Tuesday morning, he was seen walking off set after clashing with co-star Alex Beresford who pulled him up on his conduct surrounding the Duchess, and in particular her admission that she ‘felt suicidal’ as a result of the pressure of being in the Royal family.

After posting a Gif showing a ticking clock, Piers remained silent as the news of his exit officially broke on Tuesday evening, commenting hours later only to pay tribute to his manager John Ferriter, who died in 2019.

Sharing a picture of himself with his late friend, he wrote: ‘Thinking of my late, great manager John Ferriter tonight. He’d have told me to do exactly the same thing. [GMB] #TrustYourGut.’

According to reports, crisis talks were held between ITV bosses and Piers after his comments towards Meghan after her interview with Oprah Winfrey. 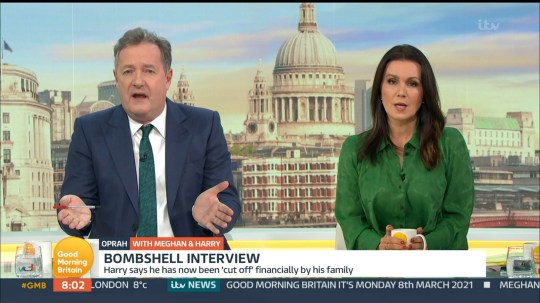 The most alarming to viewers was his admission that he ‘didn’t believe a word she said’ – with many defending Meghan and stating we should always believe those who say they’re struggling with their mental health.

It’s believed that he refused to apologise for his statements, and instead quit the Good Morning Britain, which he’s hosted for five years with Susanna Reid, completely.

In light of his comments, Piers addressed the controversy on Tuesday but did not apologise, instead clarifying his feelings on discussing suicide.

He said: ‘I still have serious concerns about the veracity of a lot of what she said. But let me just state for the record my position on mental illness and on suicide. 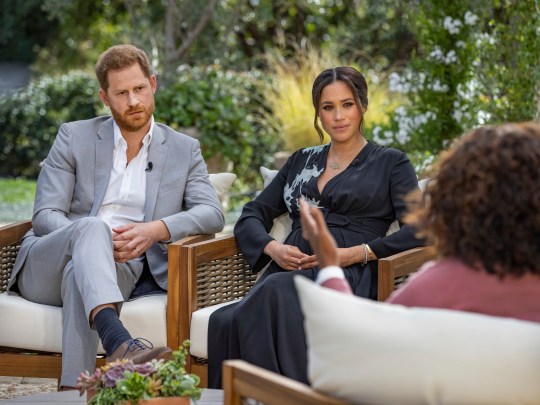 Piers was unimpressed with Prince Harry and Meghan’s interview with Oprah (Picture: Harpo)

‘Mental illness and suicide, these are clearly very serious things and should be taken extremely seriously and if somebody is feeling that way they should get the treatment and help that they need every time and if they belong to an institution like the Royal family and they go and seek that help, they should absolutely be given it.

‘It’s not for me to question whether she felt suicidal, I wasn’t in her mind and that’s for her to say.’

Doubling down on his previous criticism, Piers explained: ‘My real concern was a disbelief frankly and I’m prepared to be proven wrong on this and if I’m wrong, it is a scandal, that she went to a senior member of the Royal household, told them she was suicidal and was told she could not have any help because it would be a bad look for the family.

‘If that was true, A: If they’re still there they should be fired; B: the Royal family has serious questions to be answered about how they handled it.

‘But I would also throw in the mix that Prince Harry himself belongs to the top of several mental health charities, it does raise a question to me, he’s sort of helped himself, why could he not in that eventuality have gone and gotten Meghan the help that she needed maybe via the charities that he represents.’