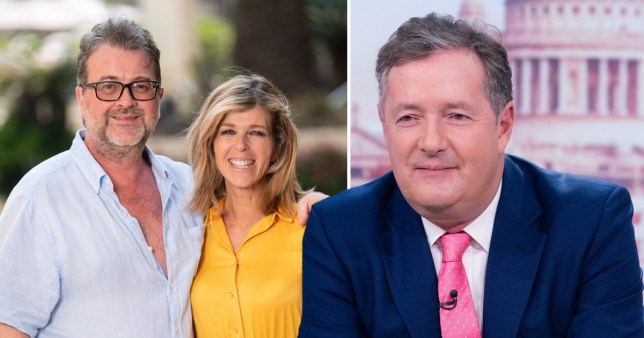 Piers led the tributes to Kate during the powerful documentary (Picture: Rex)

Piers Morgan and Ben Shephard have led the tributes for Kate Garraway, as the ‘heartbreaking’ documentary Finding Derek airs on ITV.

The film focused on the Good Morning Britain presenter and her family, recounting her husband Derek Draper’s long fight with coronavirus.

Derek, 53, remains in hospital after being admitted with coronavirus symptoms in March last year when he was put into an induced coma. He is the ‘sickest person’ medical experts at his hospital have seen since the beginning of the pandemic.

He also wrote ‘Love you [Kate],’ before adding a quote from Nelson Mandela, which read: ‘It always seems impossible until it’s done.’

Good Morning Britain presenter Ben, who also appears in the documentary, shared a picture of himself with Kate, writing: ‘So proud of my friend @kategarraway she continues to surprise, delight, occasionally infuriate but always inspire me.

‘Thinking of Kate, her family and anyone who is battling Covid or has lost someone close to them to the virus.’

The film followed Kate and her family’s experience during his illness and saw Kate speaking to people suffering long Covid, NHS staff and other experts.

The documentary also features footage of Derek in his hospital bed, with Kate granting access in order for his story to be told.

In the film, Kate also clarified that she has no plans to quit Good Morning Britain to look after Derek once he returns home, after fearing she would have to become his primary carer.

Kate also opened up about how Derek’s battle has impacted his mental health with him telling her he couldn’t go on.

She says in a clip : ‘Derek had been drifting in and out of consciousness and when he said that, it was absolutely devastating, but it showed me he was still in there. Even though it was terrible to think his spirits were so low.’

The presenter has also begun converting her home to suit her husband Derek’s needs after spending a year in hospital.

Kate Garraway Finding Derek will be available to watch on ITV Hub.

From the hallway to the garden