Piers Morgan has branded the suggestion he has white privilege as ‘race-baiting nonsense’ in a fiery clash over Meghan Markle and Prince Harry’s interview with Oprah Winfrey.

The TV presenter got into a heated debate with Dr Shola Mos-Shogbamimu on Good Morning Britain while discussing Meghan’s claims that a member of the Royal family expressed concerns over ‘how dark’ her son Archie might be once he was born.

Hurling criticism at the Royal couple, Piers said: ‘Harry and Meghan who are spray-gunning his family on global television as Philip lies in hospital.

‘I think it’s piling hurt on the queen who is already suffering greatly from her husband’s illness.’

Dr Shola hit back: ‘You are such a disappointment. I wish to God one day you will surprise me.

‘You constantly use your power as a wealthy, white privileged man with power and influence to aggravate and escalate the bigoted, sexist, racist and the misogynist attacks on Meghan and you do it so shamelessly.’

In the midst of Dr Shola’s comments, Piers interrupted: ‘What a load of race-baiting nonsense. We have done more on racial issues on this show than any other show on television.’ 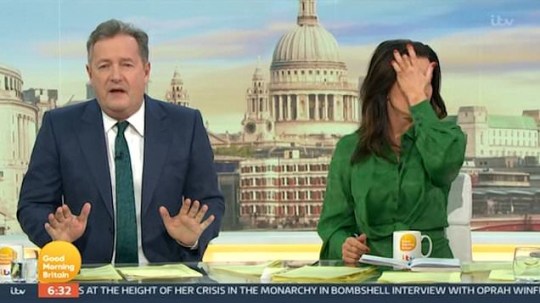 Dr Shola said the Royal family should be held to account if Meghan’s claims are true (Picture: Rex)

Dr Shola, an attorney and author, had earlier branded Piers a ‘disgrace’ and said: ‘Are you out of your godforsaken mind? Listen and you might learn something.’

When Dr Shola said it was important to ‘call out actions by the Royal family when they’ve done something wrong’, Piers argued: ‘I’m not going to let you trash the Royal family.’

She then claimed: ‘The Royal family as an institution is rooted in colonialism, white supremacy and racism. The legacy’s right there. So you are now surprised that a comment wouldn’t be made about several members of the Royal family about how dark Archie’s skin is.’

At one point as tensions flared, Susanna Reid was forced to play mediator and asked everyone to calm down as Piers barked: ‘Please, let me speak!’

Earlier in the episode, Piers said he ‘doesn’t believe’ Megan’s revelation that she considered suicide due to the abuse she was subjected to.

Wendys reveals what will be on the UK menu