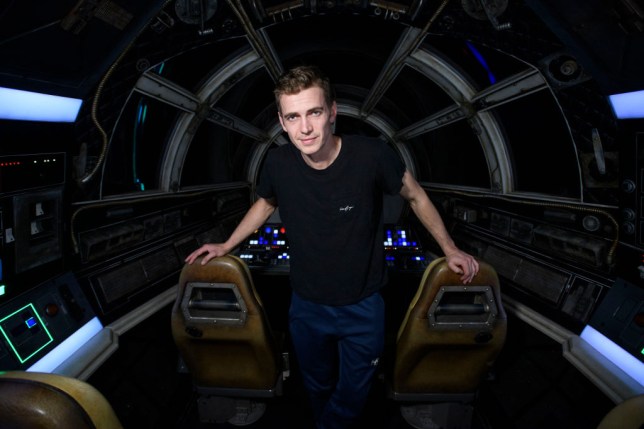 I, for one, am really rooting for him (Picture: Richard Harbaugh/Disneyland Resort via Getty Images)

In a matter of weeks, cameras will finally start rolling on Star Wars’ long-long-long-awaited Obi-Wan Kenobi series; and headline star Ewan McGregor isn’t the only one from the prequel trilogy who’s making a comeback.

Yes, in news that’s left grains of sand across the galaxy quaking with fear, Hayden Christensen – who played Anakin Skywalker in Episode II: Attack of the Clones and Episode III: Revenge of the Sith – is also returning, reprising the role that shot him to international stardom.

It’s a bold move, considering how utterly eviscerated he was first time around.

While critics and moviegoers found plenty to dislike about those movies at the time (the CGI! The Midi-chlorians! The extremely boring politics!), it was his performance that came in for a particularly strong battering.

The Guardian called him ‘the Jedi master of woodenness… the flatliner to end all flatliners’, while the Hollywood Reporter branded him a ‘dull romantic lead’ and – as recently as last year – Entertainment Weekly said he was ‘a bland actor playing a bland character’.

Although Christiansen himself chose to step back from the spotlight for a time, it’s safe to say that his career didn’t exactly continue on an upward trajectory once Anakin had a tantrum in some lava and turned into Darth Vader at the business end of Revenge Of The Sith.

2008’s Jumper, in which he starred alongside future partner Rachel Bilson, had a fair bit of hype – but nothing else on his CV has really generated much acclaim.

He briefly found himself back in the spotlight in 2018 with the romcom Little Italy, but even that was only because it was being more widely ridiculed than those allegedly romantic scenes in Attack of the Clones.

It should be said, of course, that Christiansen isn’t the only one whose career suffered after the prequels: Natalie Portman, too, said ‘no director wanted to work with’ her post-Padmé because ‘everyone thought I was a horrible actress’.

And plenty has been said about the deeply unfair difficulties faced by Ahmed Best (Jar Jar Binks) and Jake Lloyd (the younger Anakin in Episode I: The Phantom Menace).

But despite the lack of love for those films at the time, and the toll that backlash took on the rising stars in the cast, those who’ve had half an eye on the Star Wars fanbase over the last few years will know that attitudes towards that era have gradually started to warm up.

And given that McGregor and Christensen were the de-facto figureheads of that trilogy, this new series is not just a chance for LucasFilm to capitalise on that newfound positivity.

It’s also an opportunity for Christensen to rewrite the history books and finally give this character the high-quality portrayal it deserves.

I, for one, am really rooting for him.

Don’t get me wrong – he’s clearly no Daniel Day-Lewis. But it’s not like he can’t act. In fact, before appearing in a galaxy far, far away, he deservedly bagged a Golden Globe nomination for his work in the 2001 drama Life As A House.

And in his defence, the low-key performance he delivered in Star Wars nearly 20 years ago was, it seems, the exact performance George Lucas wanted.

In an interview at the time, Christensen said he instinctively wanted to lean into Anakin’s explicitly evil nature, but ‘George was constantly asking me to pull back from that’.

The director himself confirmed that he was gunning for an ‘acting style’ that was ‘very 30s, very theatrical, very old-fashioned’.

That’s a tough ask for any young actor trying to make their mark in a high-pressure, mega-budget blockbuster; let alone when the script is so swamped in atrocious dialogue (lest we forget my personal favourite, ‘my heart is beating, hoping that kiss will not become a scar’).

So though there’s no denying that his performance back then was hit-and-miss, the elements were very much against him – and hopefully now, after a few years honing his craft in smaller indie projects, he can show mainstream audiences that he’s capable of more.

With the story set 10 years after the events of Revenge of the Sith, at a point when Anakin’s slow (and good grief, was it slow!) descent into evil is all done and dusted, he can finally let loose – and I’m really pleased he’s getting another chance to prove his worth on the world stage.

It’s safe to assume that Darth Vader won’t be getting any redemption in Obi-Wan Kenobi, but Christiansen just might.

Is the coronavirus vaccine effective in children?