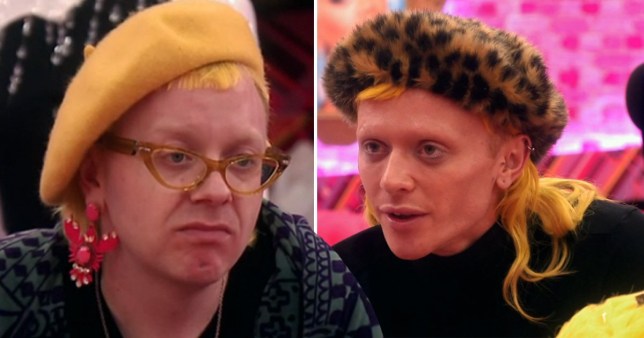 Ginny Lemon and Bimini Bon-Boulash had a heartfelt chat about being non-binary (Picture: BBC)

Last night’s episode of RuPaul’s Drag Race UK has inspired several viewers to come out as non-binary after contestants Ginny Lemon and Bimini Bon-Boulash were filmed having a powerful conversation about their gender identities.

During the episode, Ginny revealed to Sister Sister, who they paired up with for the maxi challenge, that for years they ‘didn’t know whether I was a boy or a girl’, before coming to the realisation that they connected with the non-binary community.

Overhearing their conversation, Bimini – who identifies as non-binary – approached Ginny to discuss their experiences, explaining to the camera that ‘non-binary isn’t a new thing – it’s just a new term’.

‘It’s just basically someone that doesn’t feel like they are either masculine or feminine – they kind of float between the two,’ Bimini said.

After the episode aired on BBC iPlayer, Bimini tweeted about how heartwarming it was to learn that ‘so many of you came out to your family about being non-binary after watching tonight’s episode’.

One fan, called Jake, shared a statement on Twitter, which read: ‘Do you ever watch an episode of TV and it just smacks you in the face with a reality you’d never given much thought to because this week’s Drag Race UK has done that for me, with Bimini and Ginny Lemon speaking about experiences being non-binary and what it really is.’

‘I’ve always been confused about my gender identity because I’ve always felt quite feminine but I know I present as male it’s something that’s forever changing with me,’ they said.

‘Hearing this conversation Ginny Lemon has about their experiences really resonated with me and left me actually questioning myself again and had me in tears.’

Jake outlined that gender ‘is a confusing spectrum’, and that the conversations being shared about gender has made them realise that ‘this really is how I identify and it’s taken a very long internal struggle’.

‘I feel like I’m still going to be very confused by the whole situation for a long time because gender isn’t simple and forever evolving,’ they wrote.

‘I feel like this is just the beginning of a great journey of discovering myself.’

Coming across the tweet, Bimini commented: ‘All the power to you!’, to which Jake replied: ‘You’ve really helped having a conversation about NB and gender fluidity on the TV and after years of confusion it’s nice to finally have an answer.’

In a further tweet in response to Sister Sister, Jake explained that the Drag Race UK moment was ‘such a lights on moment for me’ that’s ‘going to impact my life forever’.

Another fan of Drag Race UK stressed the impact the exchange on Drag Race UK had on them, writing: ‘It’s conversations like this that make me feel, yes, I belong here, there’s nothing wrong with me! I don’t have to choose a side because society says so! I‘m just me, and I am enough!’

I so loved the conversation between @biminibabes and @GinnyLemon69
Itâs conversations like this that make me feel, yes, I belong here, thereâs nothing wrong with me! I donât have to choose a side because society says so! Iâm just me, and I am enough! ð¥°

I love Bimini and Ginny for talking abt the non-binary identity bc man, they perfectly encapsulated how I myself feel within my gender identity ð

The conversation in #DragRaceUK between Bimini and Ginny about identity and being non-binary tonight was SO powerful. Thank you QUEENS. ð

Someone else admitted that they ‘have never felt more validated, more seen or more accepted’.

‘What I wouldn’t give to have had Ginny and Bimini to look up to when I was 15,’ one fan wrote.

Following the incredible support Ginny and Bimini received for their heartfelt talk, Ginny expressed their gratitude for the ‘outpouring of luv’.

‘Fank u and love to all my trans and non binary siblings united we rise,’ the drag queen tweeted.