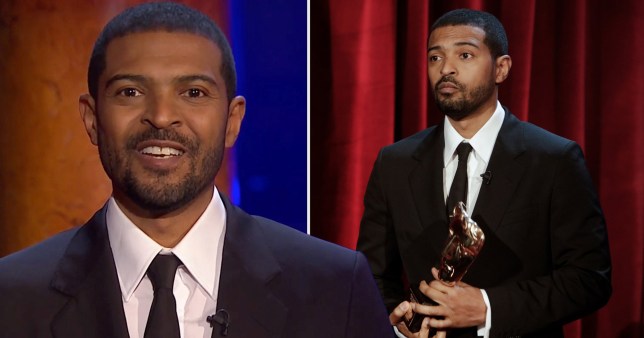 Noel Clarke was recognised for his achievements at the Bafta Awards (Picture: BAFTA)

The actor, writer and director, 45, dedicated it to ‘my young black boys and girls out there’ as he accepted a special award.

Brit Noel received the gong for outstanding British contribution to cinema during the broadcast from the Royal Albert Hall in London.

He was first recognised by Bafta in 2009, when he won the rising star prize.

Recalling that night, he said: ‘Thirteen years ago when I won the rising star award I bounced off my chair and I popped my collar as I went up.

‘For years I never really understood why I did that. I couldn’t articulate it. For years people have told me how arrogant it was, that I shouldn’t have done it, and I have always said to myself that if I ever got back on this stage again I would apologise for it.

‘I’m not going to do that. Recently I realised why I did it. I felt vindicated. I won something at the time that someone like me was never supposed to. Something that I had been told I couldn’t.’

The outstanding contribution award is among Bafta’s highest prizes and is presented annually in honour of Michael Balcon, the British film producer known for his work with Ealing Studios.

Noel dedicated the award to ‘the underrepresented, anyone who sits at home believing that they can achieve more’.

‘This is particularly for my young black boys and girls out there who never believed that this could happen to them,’ he said.

The full list of Bafta Film Award winners 2021 are:

‘I am so, so thankful for this. Years ago I ended with the words, “Yes we can” and we still can. It’s just tough. So I wanted to end this one a little bit different.

Co-host Clara Amfo praised him for his ‘powerful and incredible words.’

The actor wrote and starred in the acclaimed film trilogy Kidulthood, Adulthood and Brotherhood, and directed two of them.

He made his first TV appearance more than 20 years ago in the Channel 4 series Metrosexuality, and gained fame for his roles as Mickey Smith in Doctor Who and Wyman Norris in Auf Wiedershen, Pet.