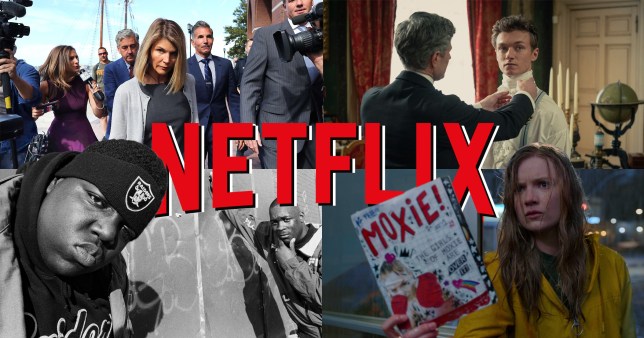 Another month means another host of Netflix treats for viewers to get stuck into.

March will see a heap of new films such as Moxie, A Week Away and Yes Day making their way to the streaming platform.

Popular documentary series, Last Chance U also makes a return, but this time the focus is on Basketball.

Elsewhere, new projects such as The Irregulars and Biggie: I Got A Story To Tell are also ones to look out for.

So here are some of the best new releases coming to the streaming service in March.

Rapper icon Notorious B.I.G’s life and career is explored through rare behind-the-scenes footage of the star.

Biggie: I Got A Story To Tell will give fans an insight into the artist’s life before he cracked the music industry, as well as following his success, with his mother, Violetta Wallace, among those remembering him on screen.

The documentary features from stars including P Diddy, Faith Evans and includes footage of Biggie filmed by his best friend Damion ‘D-Roc’ Butler.

Directed by Amy Poehler and based on the novel by Jennifer Mathieu, the film follows Vivian (Hadley Robinson), a seemingly shy 16-year-old, has always preferred to keep her head down and fly under the radar.

But when the arrival of a new student (Alycia Pascual-Peña) forces her to examine the unchecked behavior of her fellow students running rampant at her high school, Vivian realizes she’s fed up.

Inspired by her mother’s (Amy Poehler) rebellious past, Vivian anonymously publishes an underground zine called Moxie to expose bias and wrongdoing in her high school, and unexpectedly sparks a movement.

Now at the center of a revolution, Vivian begins to forge new friendships with other young women and allies, reaching across the divide of cliques and clubs as they learn to navigate the highs and lows of high school together.

The award-winning docu-series, Last Chance U, returns for its premiere season of Basketball.

Led by passionate head coach John Mosley, the ELAC team is made up of former D1 recruits and powerhouse athletes hustling to prove themselves for a last chance to fulfill their dreams of playing at the next level.

But the team is tested as the players battle adversity, inner demons, and emotions on and off the court.

The fan-favorite series takes a dynamic and intimate look at the lives of the East Los Angeles JUCO players and their coach.

The new film tells the story of the nationwide scam which saw more than 50 people indicted in 2019, including actresses Felicity Huffman and Lori Loughlin. The documentary will focus on Rick Singer.

Rick was the mastermind behind the scheme to have wealthy parents pay to get their children into colleges of their choice. Setting up fake charities, Singer orchestrated donations from parents all over the US amounting to $25 million (£17.8 million).

Netflix said in an announcement that the documentary will use ‘an innovative combination of interviews and narrative recreations of the FBI’s wiretapped conversations between Singer and his clients.’

Set in Victorian London, the series follows a group of troubled street teens who are manipulated into solving crimes for the sinister Doctor Watson and his mysterious business partner, the elusive Sherlock Holmes.

As the crimes take on a horrifying supernatural edge and a dark power emerges, it’ll be up to the Irregulars to come together to save not only London but the entire world.

New releases coming to Netflix US in March 2021

Biggie: I got a story to tell

Murder among the Mormons

Under Suspicion: Uncovering the wesphael case

B: The Beginning Succession