Naga Munchetty was seen recalling the first ever time she experienced racism as a seven-year-old girl at school in her Panorama episode: Let’s Talk About Race.

The BBC Breakfast presenter, 46, was seen taking a deep dive into what race and racism means in the UK, as she met with people across the country to share their own experiences.

In the episode, that was widely praised by viewers for highlighting racial inequality within society today, Naga revealed the first time she was subjected to racism as a little girl.

‘You never forget the first time,’ Naga said. ‘I was seven when someone I thought was my friend at school said we could no longer hang out because I was a P-word.’

Sharing how she felt, Naga continued: ‘The sense of shame was overwhelming.

‘I was told I didn’t belong when, up until then, I assumed I did. From that moment on, I knew I was seen as different.’ 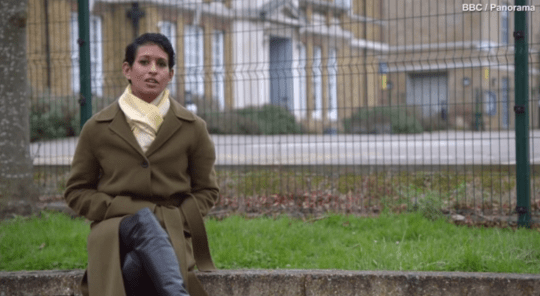 Naga said the ‘sense of shame’ she felt was ‘overwhelming’ (Picture: BBC)

As well as her experiences at school, Naga also reflected on the moment she called out former US president Donald Trump for making comments that urged his opponents to ‘go back to the places which they came’.

She was accused of breaching BBC guidelines by airing her own views live on air.

Addressing the incident, Naga said during her Panorama episode that she felt compelled to say something as she too had experienced the same because of ‘the colour of my skin’.

Naga’s programme #letstalkaboutrace is very powerful and very upsetting as well. It’s quite shameful. Racism is a disgusting thing that needs to be got rid of.

She said: ‘Part of me wishes that the Trump incident hadn’t happened, but I was furious.’

One more viewer agreed: ‘Naga’s programme #letstalkaboutrace is very powerful and very upsetting as well. It’s quite shameful. Racism is a disgusting thing that needs to be got rid of.’

‘Amazingly thoughtful & courageous insight from @TVNaga01 & all the contributors in #letstalkaboutrace @BBCOne,’ posted one fan.

‘What a fabulous, thought provoking programme. @TVNaga01 is wonderful. #letstalkaboutrace,’ shared another viewer.

Panorama: Let’s Talk About Race is available to watch via catch up on BBC iPlayer.