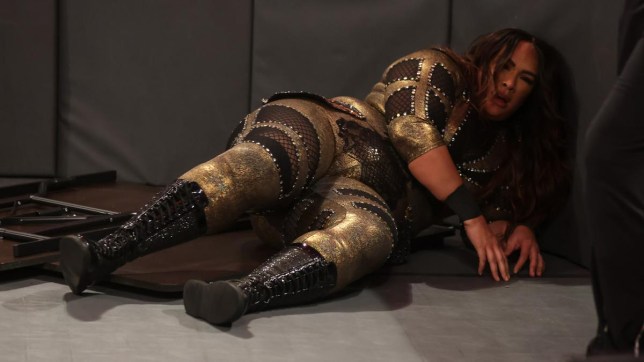 WWE superstar Nia Jax was the talk of Twitter after an awkward injury on Monday Night Raw.

The wrestler – one half of the Women’s Tag Team Champions with Shayna Baszler – lost to long-time rival Lana in a Tables Match on last night’s show, but one moment in particular caught the attention of the internet.

After missing a leg drop and landing on her bottom, Nia was clearly heard shouting: ‘My hole!’

Not surprisingly, Twitter took this and ran with it, with #MyHole trending during the broadcast and beyond.

Even WWE Hall of Famer Mick Foley caught wind of the hilarious incident, and gave a nod to ‘Stone Cold’ Steve Austin as he pointed out the marketing and merchandise potential.

Knowing how quickly WWE can react with designs – Bad Bunny and last year’s ‘I wasn’t there’ WrestleMania 36 t-shirts are great examples of that – it wouldn’t be a big shock.

It’s also nice to see Nia getting some attention for a genuinely entertaining moment after coming under heavy criticism over the past couple of years with fans claiming she has injured her co-workers.

Jax was quick to sarcastically respond: ‘I moved the table so it could injure you’.
She also retweeted a fan who wrote: ‘Every injury in WWE is Nia’s Fault…..#sarcasm #shesnotlikemostgirls’.

Back in December, the 36-year-old star also addressed an awkward moment during a Raw match where she ended up charging and tumbling out of the ring.

She joked she was aiming for Little Jimmy – R-Truth’s imaginary friend – and couldn’t resist another quip when a fan urged her not to ‘hurt’ him.

She tweeted: ‘Too late. I’m sure the dirt sheets will report that I “legitimately” injured Jimmy and he will be out for 6-8 weeks’.

What I Rent: Rob and Roisin, £1,300 a month for a flat in Richmond upon Thames