Initially, this year’s Friends reunion didn’t exactly offer much in the way of entertainment. There was Justin Bieber dressed as a potato, and there was that meme about Matt LeBlanc looking like someone’s Irish uncle. Apart from that, the whole thing felt like an elaborate attempt to give James Corden even more air time.

But that was then. Because now that David Schwimmer and Jennifer Aniston are dating, the Friends reunion has become an important historical document and must be preserved for ever.

Now, it’s important to state here that Schwimmer and Aniston might not be dating. This whole kerfuffle seems to come from two pieces of information. The first was the segment from the Friends reunion – the only segment, really, that offered any new information – where they admitted they had secret crushes on each other while they were filming Friends. The second is that, after the reunion, Schwimmer apparently flew to Aniston’s home in LA so they could visit a vineyard together.

There are hundreds of reasons why Schwimmer might want to visit Aniston, many completely mundane. But the internet wants the two to date, so that’s it. They’re dating. They’re definitely dating, and it’s definitely amazing, and they call each other “my lobster” while they stroke each other’s hair in bed, and spend their days dancing around in fountains and wearing all of Chandler’s clothes and shouting “Pivot!”

Sure, a couple of years ago the internet hoped against hope that Aniston would get back with Brad Pitt, but that’s old news now. There’s something oddly defeated about a woman reuniting with an ex-husband. But a co-star? A co-star who her character had an on-off relationship with, on a sitcom that stopped being made 17 years ago? That’s much more exciting. Get it on already. Call each other Ross and Rachel while you’re doing it. Go on, hurry up, we’re all watching. 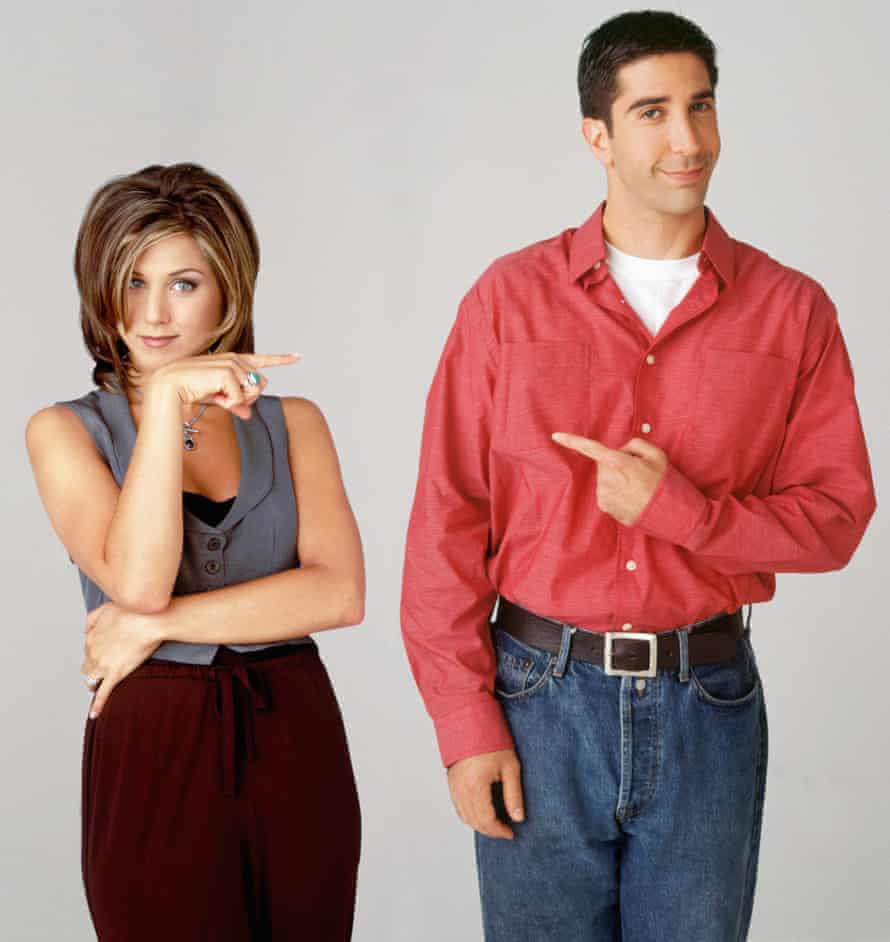 We’ve been invested in this for decades now … Aniston and Schwimmer. Photograph: NBCUniversal/Getty Images

True, there may be something genuinely icky about deliberately confusing an actor with the role they play on television. We’re only interested in Schwimmer and Aniston getting together because we saw them act out a mimicry of infatuation on a show we liked. Had they played brother and sister on Friends, the internet might not have exploded with the same level of joy. But because we invested a decade of our stupid lives hoping Ross would end up with Rachel, it is suddenly of the utmost importance that Schwimmer follows the exact rote beats of this fictional relationship with Aniston. We demand it.

The optimist in me hopes this is all true. That two people in their 50s, who have both been beaten up by love in the past, have finally found lasting happiness with an old friend. It hopes that Schwimmer and Aniston will now have the most meaningful relationship of their lives, and find the lasting trust and companionship that has thus far eluded them.

But the cynic in me knows better than this. It knows that interest in the Friends cast is higher than usual post-reunion, and this may be nothing more than an attempt to stay in the headlines. It has seen the Instagram posts of Schwimmer self-consciously hawking T-shirts featuring Ross and Rachel embracing, and it has a horrible lurching feeling that this entire romance is nothing more than an opportunity to sell a range of sub-Redbubble tat.

Besides, everyone knows Rachel should have ended up with Bruce Willis.