Moon Knight: What could happen in a potential season 2?


Oscar was an incredible addition to the MCU (Picture: Gabor Kotschy/Marvel Studios/Disney Plus)

Warning: spoilers ahead for Moon Knight on Disney Plus.

The finale of Moon Knight was a game-changing moment for the MCU, with episode 6 introducing a brand new superhero before the debut of Jake Lockley in the post-credits scene.

While there has been no official confirmation that a season 2 is happening, numerous fans have expressed their hope that the show could continue in some capacity, as have members of the cast.

In the final chapter of the show on Disney Plus, Layla El-Faouly (May Calamawy) became the avatar of the ancient Egyptian goddess Taweret (Antonia Salib), as she joined her husband Marc Spector (Oscar Isaac) and his alter Steven Grant in the fight against Arthur Harrow (Ethan Hawke).

Afterwards, Marc demanded that Khonshu set him and Steven free from servitude, which the Egyptian moon god finally agreed to, marking an end to their journey as Moon Knight and Mr Knight… they were led to believe.

Lo and behold, in the post-credits scene, Khonshu introduced Harrow to Jake Lockley, Marc and Steven’s third identity who neither of them were aware of.

So if a second season were to happen, how could it unfold? Here are our predictions.

What could happen in a potential season 2?

Marc and Steven find out about Jake

All along in Moon Knight, it was hinted that Jake was in the background, acting out when Marc and Steven both blacked out. 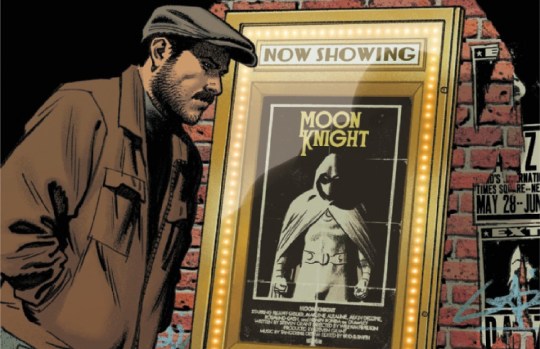 Jake is a cab driver in the comics (Picture: Marvel)

In the mental institution that Marc and Steven landed in when they arrived in the afterlife, a sarcophagus was shown shaking in a room, leading many viewers to deduce that it was Jake inside.

Then, in the post-credits scene, Jake made his official arrival, as the partition in the limousine he was driving came down and he shot Harrow, who was in a passenger seat, at point-blank range.

It would definitely make for an intriguing watch to see Marc and Steven discover the havoc Jake has caused away from their prying eyes.

Layla continues to be epic as new superhero Scarlet Scarab

Early on in the show, Marc revealed that the reason why he was keeping Layla at a distance was because Khonshu wanted her as his next avatar.

In the finale, the moon god continued to push Layla to become Marc’s replacement, but she rejected him.

Nonetheless, after appearing reluctant to become any god’s avatar, she changed her mind (on a temporary basis) for Taweret, the god known for protecting mothers and children and guiding souls in the afterlife.

One of the most powerful moments of the episode came when Layla saved a young girl, who asked her: ‘Are you an Egyptian superhero?’, to which she replied: ‘I am.’ We need to see more!

Marc and Steven regain the powers of Moon Knight

Marc and Steven may have bid Khonshu farewell… but we hope this isn’t the end of the pair as Moon Knight and Mr Knight respectively.

Steven realised he was just as physically capable as Marc in the final fight as Mr Knight (Picture: Marvel Studios/Disney Plus)

The end of the episode came just as Steven has become used to his physical abilities as Mr Knight, showing off his fighting prowess in a sparring match against Harrow.

Oscar is such a fantastic addition to the MCU, and we’re dying to see more of him all suited and booted up.

Khonshu disappears once and for all

By the final episode, Khonshu is still continuing to take control of Marc’s life (without his knowledge) through Jake.

Khonshu still has Marc and Steven under his thumb through Jake (Picture: Marvel Studios/Disney Plus)

While the moon god was the reason Marc survived when he was on his deathbed, he isn’t what we would call on all-benevolent god, as he takes advantage of Marc’s mental health condition, dissociative identity disorder, to get what he wants.

It would be brilliant to see Marc and Steven able to embody the power of Moon Knight and Mr Knight without the need for Khonshu in the background.

Could it be possible?

Cameos from Bushman or the Midnight Sons team

There were several characters referenced in the show from the Marvel comics who didn’t end up making appearances, from Bushman, Marc’s former commanding officer who he later went to work for as a mercenary, to Frenchie, another mercenary who was a sidekick to Moon Knight.

While they weren’t introduced in live-action, we’re hoping they could end up making their debuts in future, with some fans speculating over whether Bushman could be the next villain to go up against the titular character.

What’s more, during an interview with Metro.co.uk, Oscar expressed his hope for a Marvel team up between characters such as Moon Knight, Blade and Ghost Rider… who made up a supernatural hero team known as the Midnight Sons in the comics.

We’d love to see the Midnight Sons brought to life.

What has been said about the chances of a season 2?

There is no official confirmation as of yet of a season two, but that hasn’t stopped the cast and creators of the show from admitting they hope to return.

Speaking to RadioTimes.com, Oscar said that there were ‘no official plans’ to continue the series, as he believes ‘it would depend on what the story is’.

However, he added: ‘That being said, I love being Steven. I just love it. It’s just like, physically, it’s so much fun to be him. So, you know, if there was a story that really made sense, I’d be happy to be part of it.’

When asked whether she wanted to see more of Layla in the MCU, May told IndieWire: ‘Never say no to a spin-off. I have fallen in love with her and her fight. Layla has so many mysteries about her that I feel like she deserves to have them expanded upon.’

Meanwhile, director Mohamed Diab said to IGN that he felt it would be ‘a waste not to continue the story with Marc and Steven’, adding that he ‘would love to be part of expanding that world which I helped build and feel like it’s mine’.

Our fingers are crossed!

Moon Knight is available to watch on Disney Plus.